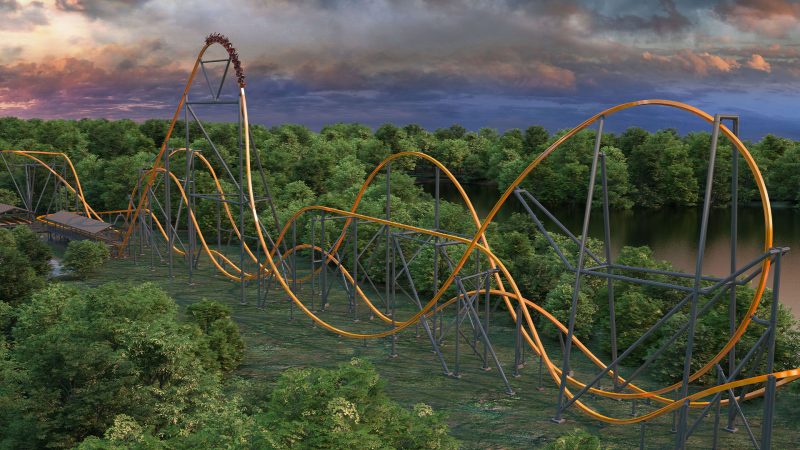 Six Flags has announced an abundance of record-breaking roller coasters, state-of-the-art waterslides, and immersive family rides for the 2020 season.

The company has also confirmed that three of its water parks will be rebranded as Six Flags Hurricane Harbor.

Six Flags Chairman, President and CEO, Jim Reid-Anderson, described the additions as the “biggest and most diverse lineup in the company’s history”. 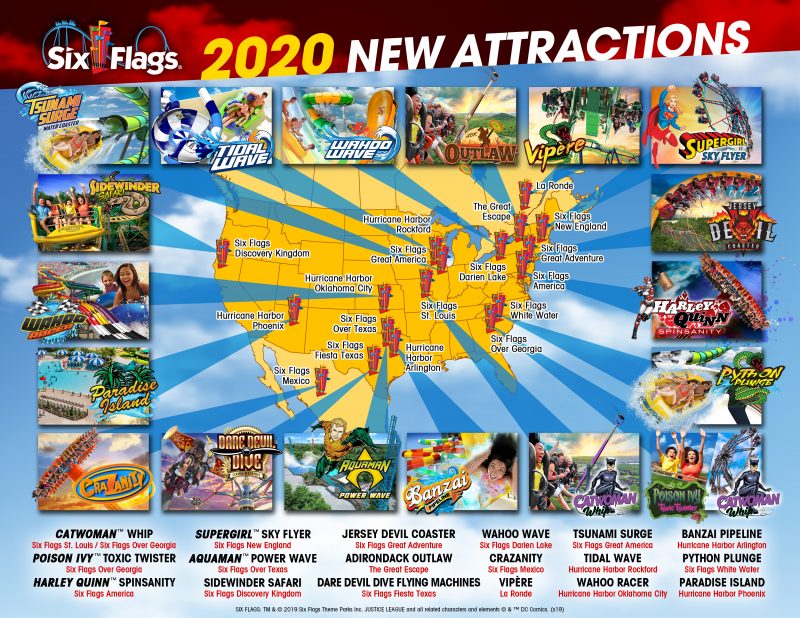 “Six Flags is committed to delivering remarkable experiences in every park, every year,” added Reid-Anderson.

He went on to detail major investments at the water parks, which include new water attractions and extensive upgrades.

Inspired by New Jersey folklore, it will reach top speeds of 58mph along 3,000 feet of track, and will boast five elements, including two dramatic inversions.

Six Flags Great America will break records with its new water coaster, Tsunami Surge. At 86 feet in height, it will be the tallest water coaster of its kind in the world.

Tsunami Surge will boast top speeds of 28mph over 950 feet of tunnels and open-air slides. It will have three blasts and five drops, as well as AquaLucent technology.

Six Flags Mexico has announced CraZanity, the world’s tallest pendulum ride. With a record height of more than 50 metres, CraZanity will reach speeds of more than 120km/h.

Six Flags Over Texas will debut Aquaman: Power Wave, a water coaster that launches riders backwards over 700 feet of track at 63mph.

Catwoman Whip at Six Flags St. Louis and Over Georgia

Six Flags New England has announced the new Supergirl Sky Flyer attraction for 2020, which will take guests through the sky in open-air vehicles.

Six Flags Hurricane Harbor Phoenix is set to undergo its largest expansion in years with the new Paradise Island.

Paradise Island will include a 12,000 square foot activity pool, a new water volleyball area and a water basketball court.

The water park is debuting a new, multi-lane, high-speed racing complex, Wahoo Racer. It will also get various upgrades and new tropical theming.

Six Flags Fiesta Texas will debut Daredevil Dive Flying Machines, the tallest ride of its kind in the world. It will feature aerial banks, loops and dives, with guests sitting in a retro steampunk flying machine.

Six Flags America will open its newest attraction, Harley Quinn Spinsanity, an oversized pendulum ride named after DC’s Harley Quinn with speeds of up to 70mph.

Magic Waters will become Hurricane Harbor Rockford when it opens next summer with the only tailspin waterslide in the Midwest, Tidal Wave.

The thrill slide will feature new AquaLucent technology, and will reach speeds of 15mph as riders descend from 43 feet.