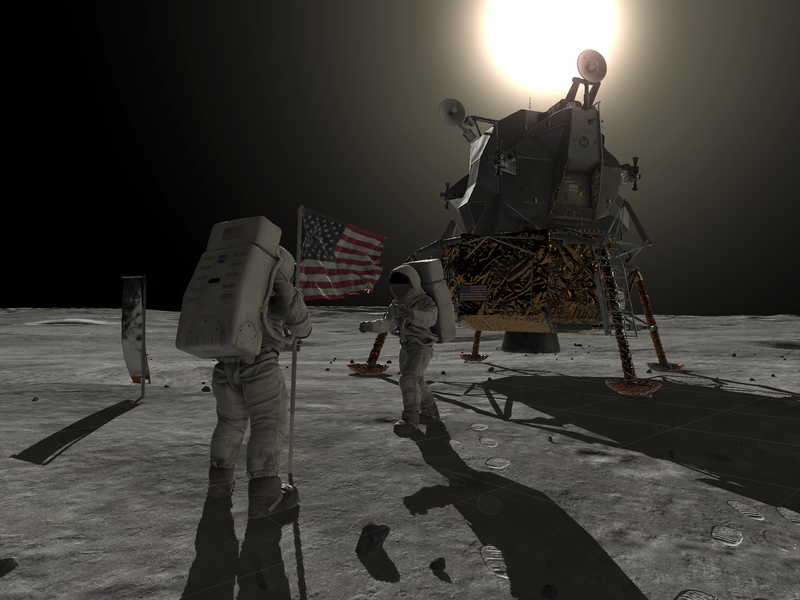 The AR app, now available for Apple and Android devices, puts users on the surface of the moon, allowing them to virtually moonwalk, witness the craters, and jump up and down in a state of altered gravity – with information about the landing integrated into the app’s design.

The app also charts the Apollo’s path through the moon’s airspace, and allows users to simulate the mission takeoff. Two games, ‘Moon Shot Challenge’ and ‘Lunar Landing Challenge’, test users ability to guide a safe landing through a lunar terrain.

“It makes the landing more interactive, and it allows people to bring the Apollo program into their own experience,” said Teasel Muir-Harmony, a curator at the National Air and Space Museum (via Smithsonian).

Developers of the app used 3D scans of Neil Armstrong’s space suit and of the Lunar Command Module in order to replicate the feeling and the scale of the landing.

The Smithsonian Channel is launching the app in conjunction with its six-part ‘Apollo’s Moon Shot’ series, which premiered earlier this month.

The series, which features Muir-Harmony, narrates the story of the Apollo 11 landing through artefacts in the Smithsonian collection along with rare archival footage and audio tapes.

“We often focus on the astronauts, but over 400,000 people worked on the program,” said Harmony. “One of the things that people don’t always realise is how many details were involved in a program like that, how many new technologies had to be developed, and how many people had to work together to make it all possible.”

“The series and the app do a wonderful job of exposing people to the complexities of that program. It’s exciting for us to be able use augmented reality to give people more access to the artifacts in our national collections.”

Meanwhile, the Smithsonian has requested a 2020 budget of $978.3 million, for projects at its National Air and Space Museum, National Zoo, Hirshhorn Museum and Sculpture Garden, and Smithsonian Institution Building.

Storytelling with sound: trends in audio at theme parks at InfoComm 2019