Enterspace VR Center Stockholm will offer six different virtual reality (VR) rooms spread across 900sqm. It will also feature a bistro and bar for guests to relax before and after VR gaming. The centre will open on 31 May.

A range of location-based VR experiences will be on offer. Some will be available for solo play, such as fighting waves of enemies as the assassin John Wick and defeating a foe risen from the dead in The Mummy Prodigium Strike.

Others will allow up to four players to see and interact with each other throughout the experience. These include The Raft, where players investigate supernatural creatures in a swamp, and the space adventure Ringwalker.

Sara Strömgren, head of visitor experiences at Enterspace, said: “Enterspace VR Center Stockholm is for everyone. We offer a complete concept where visitors can experience VR of high quality, but also eat and drink. A fun and social hub where friends and colleagues can do something completely new together, but also stay and talk about their experience.

“We strive to offer something for all people of ages and tastes, and we also place great emphasis on hospitality. You can come to us and experience VR even if you don’t have previous experience with the technology or the gaming world. We want everyone to feel welcome and cared for.”

The centre will continuously be updating the experiences to always have something new and exciting for visitors to try out. It will also soon open a VR cinema as well.

Enterspace was founded in 2016 and was subsequently acquired by Starbreeze in 2017. The Stockholm VR centre will be its first location. It will utilise StarVR technology developed by Starbreeze together with Acer. StarVR can additionally be found at Imax VR Centres in Los Angeles and New York. 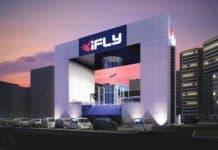