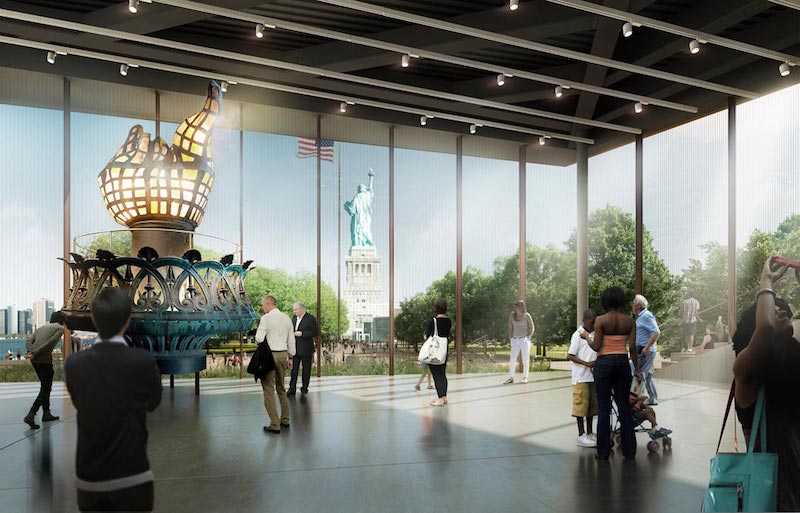 The Statue of Liberty Museum has opened to the public after a $100 million renovation. The 26,000-square-foot space features historic relics and interactive exhibits.

The attraction includes full-scale replicas of Lady Liberty’s face and feet, a recreation of the workshop in Paris where Frédéric-Auguste Bartholdi oversaw the sculpture’s creation, and the original, 3,600-pound torch.

Today, the new Statue of Liberty Museum opened to the public! The museum contains Lady Liberty's original torch, an immersive theater, and kiosks where visitors can reflect on what Liberty means to them. We hope you make it out to visit soon! We would like to thank our donors, partners, and supporters for being with us every step of the way. During initial planning in 2015, all the way to today! This Museum is for you and the people of the world. #StatueofLibertyMuseum #statueofliberty #ellisisland #nonprofit #ladyliberty #libertymeanstome #libertyisland #immigration #nyc #deblasio #dvf #fxcollaborative #phelpsconstructiongroup #esi #museum

The immersive theatre is multimedia experience telling the story of the Statue and the ideals she represents. Visitors will enjoy a virtual fly-through ascending the Statue that recreates interior views and sounds.

First visitors explore the new #StatueofLibertyMuseum which opened today at noon. No tickets are needed and the museum is open 7 days a week. Reserve your @StatueCruises ferry tickets to Liberty & Ellis Island and see the new museum this summer! #NYC #USA #Liberty pic.twitter.com/nqohMMSu9G

In the Engagement Gallery, visitors can explore Frédéric Auguste Bartholdi’s warehouse via a series of multimedia displays. Throughout this section, artefacts, graphics and interactive media explain the Statue’s history, design and role in the world.

Guests will be invited to document their visit and express their views in the Inspiration Gallery, by adding a self-portrait and collage to a digital experience called Becoming Liberty. The tour culminates with an up-close view of Liberty’s original torch.

At the Statue of Liberty, where my dad’s being honored with a Liberty Star as part of the new museum’s opening. When he came here from Cuba at 16, not only was he all alone, but he only spoke Spanish. His grit, determination, and optimism are inspiring. #StatueofLibertyMuseum pic.twitter.com/DFhR3Dbf7p

Daily access to the Statue of Liberty is still limited, but the new museum will be open to all. Admission comes free with ferry tickets from Liberty State Park in New Jersey or Battery Park in New York.