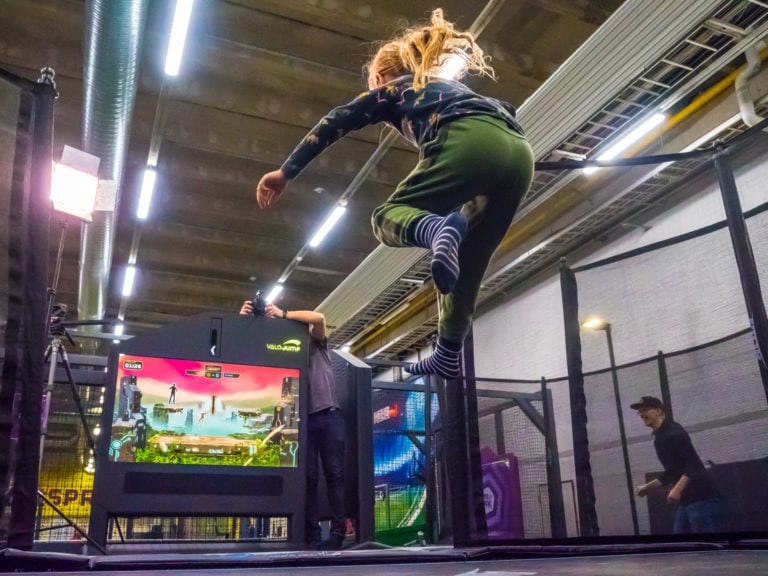 Finnish company Valo Motion has launched a new game for its ValoJump platform. It is aiming to change the way the industry thinks about trampolines by adding interactive technology.

Super Stomp encourages two players to work out as they compete against one another in a fast-paced battle. Players must ‘stomp’ their opponent into the ground, before the other gets the chance to do the same.

The game is played on two adjacent ValoJump-equipped trampolines. To start playing, both players are required to step on the trampoline and jump to select the “2-player games” button. After the game starts, they then attempt to ‘land’ on each other (on-screen, not in real life!) to achieve a stomp.

Competitors have to be quick or outsmart their opponent in order to win the game. Once they get off the trampoline, they can share videos of their battles online with friends. The game is both fun to play and captivating to watch.

“Kids just love Super Stomp and have endless competitions with it,” says Mika Jimenez at SuperPark in Helsinki. “The game is a huge success in our park! We love it!”

Set for release on February 28, Super Stomp is available in locations with multiple ValoJump systems. Currently that includes four outlets in the USA, four in Germany, plus an additional four in Switzerland, Poland, Estonia and Finland. Launching soon will be the first ValoJump System in China, at the new SuperPark Shanghai.

“ValoJump aims to make trampolines even more fun and approachable than they already are,” says lead game developer Lauri Lehtonen. “By introducing multiplayer to ValoJump, people can now share the fun with their friends. Super Stomp will appeal to a broad range of people around the globe and bring them joy in exercising.”

Valo Motion’s interactive technology can be retrofitted to existing trampolines. The company also markets an augmented climbing wall product called ValoClimb. Due to safety regulations, there can only be one jumper per trampoline when using Super Stomp with ValoJump.