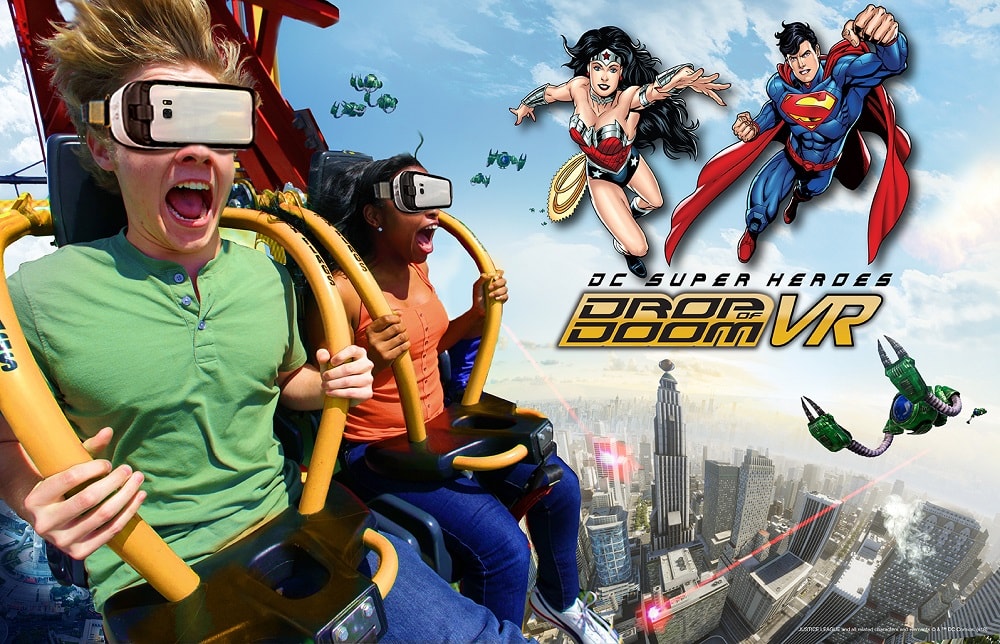 Six Flags Magic Mountain in California has added a super hero themed virtual reality experience to one of the world’s tallest and fastest drop tower rides.

Warner Bros Consumer Products has partnered Six Flags Magic Mountain to bring Superman and Wonder Woman to the drop the drop tower ride. In DC Super Heroes Drop of Doom VR, riders will don virtual reality headsets to watch the two heroes battle their nemesis, Lex Luthor, while plunging 122m at speeds of up to 85mph.

“As the world leader in ride innovation, Six Flags is taking virtual reality to the next level by leveraging the unique thrill of one of the world’s tallest drop towers and adding an epic virtual battle of good versus evil,” said Neal Thurman, president of Six Flags Magic Mountain.

When riders buckle into their floorless seats and strap on their headsets, they are immersed into a 360-degree virtual world where they are unwittingly invited by Lex Luthor, to test the newest LexCorp levitation technology.

The story progresses throughout the ride with Lex Luthor levitating riders with his anti-gravity gun as they start their ascent of the tower. In their headsets they will see themselves begin to float upward, rising above skyscrapers.

Wonder Woman and Superman arrive to rescue the riders and start an epic battle high in the air with Lex Luthor and an army of flying LexBots.

When the battle spins out of control riders fall a thousand feet straight down to the city streets, timed to coincide with the dramatic descent of the drop tower.

Six Flags Magic Mountain has 19 roller coasters and over 100 rides, shows, and attractions for the entire family. Last August, the park announced that in 2018 it would start operating 365-days-a-year.

Stranger Things is coming to Universal Parks and Resorts this Halloween