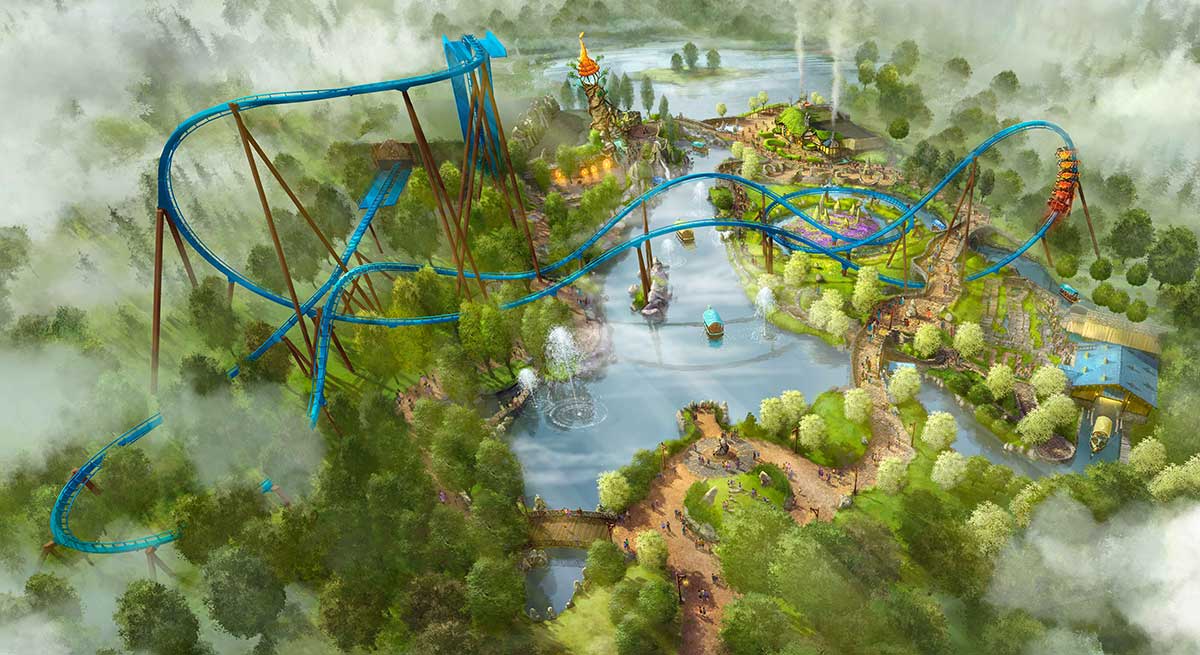 More details have been released at EAS about the biggest ever expansion at Toverland theme park in the Netherlands, including two major new rides.

The Avalon themed area is inspired by the Celtic legends around the famous wizard Merlin, King Arthur and the magic sword Excalibur.

Peter van Holsteijn, principal designer of Toverland, says: “Avalon is a magical place where Merlin is central. Together with his fellow Fēnix he ensures that the good magic dominates here. The evil, personified by the witch Morgana, is always on the lookout. ”

The area will feature a Bolliger & Mabillard wing coaster called Fēnix. It is an eight-way wing coaster, with the trolleys hanging next to the rails to create a flying experience.

van Holsteijn said: “The almighty firebird Fēnix arises from its own ashes every 777 years. Our guests are invited to take place under Fēnix’s wings to accompany it on its first journey after resurrection.”

Fēnix will be ​​40 meters high, 813 metres long and will achieve a top speed of 95 km / h. It will be the longest wing coaster in Europe and the first in the Benelux.

The ride includes three inversions – a wing over drop (half corkscrew, half looping), an immelmann (half looping, half roll) and a zero-g-roll.  Thrilling near misses will occur as the phoenix gets used to his new wings.

The second ride will be a 12 minute boat ride called Merlin’s Quest, taking guests through the Avalon Waters.

The story behind the ride is that guests are on a search for Tir na nŌg, the source of eternal youth, and sail into a dark ride section themed as a ruin.  This will be the first attraction with a dark ride in Toverland.

14 boats will cruise over a 430 metre course in this family attractions. MACK Rides will supply Merlin’s Quest boat ride.  Two of the boats include disabled access.

At the press conference at EAS to launch the rides, Mack Rides’ Christian von Elverfeldt added, “We are proud to be working again with Toverland, another family business like ourselves. We were very impressed with the ride’s storyline.”

Music throughout the new land will be provided by IMAscore.

The expanded Toverland Theme Park will be one and a half times larger. A new entrance area and a new theme area will be built over an area of seven hectares. Later this month, more details of the new themed area will be revealed.  The expansion will cost 30 million euros.

The park has launched the dedicated 2018.toverland.com website, where fans can follow the latest news on the expansion.