Triotech, the award-winning creator of media-based attractions, has announced that it will be creating Knott’s Berry Farm’s newest attraction, a reimagining of the classic “Bear-y Tales”.

Triotech is proud to announce that it will be bringing back a much-loved ride at Knott’s Berry Farm for the park’s 100th anniversary, and updating it for the 21st Century. At a press conference at IAAPA Expo 2019 in Orlando, Florida, the company announced that Knott’s Bear-y Tales: Return to the Fair, a new 4D interactive dark ride, will be coming to the California park to mark its milestone anniversary.

Triotech is designing the attraction and the scenic theming for the new ride, as well as producing the animation and gaming system. Knott’s Bear-y Tales: Return to the Fair will take guests on a dark ride experience that is enhanced with 4D effects and interactivity.

“Triotech is thrilled to work with the amazing team at Knott’s Berry Farm and Cedar Fair on this high-profile project. For this unique attraction, the Knott’s team gave us access to a wealth of archive materials that have been key in understanding the original Knott’s Bear-y Tales” says Ernest Yale, Triotech’s Founder, President and CEO.

“The return of Knott’s Bear-y Tales is perfect for the 100th anniversary because it brings back one of the park’s most nostalgic and beloved attractions in an innovative 4-D dark ride format that will delight an entirely new generation of fans,” says Jon Storbeck, Vice President & General Manager of Knott’s Berry Farm.

This new 4D interactive dark ride will feature reimagined show scenes that echo the original attraction, such as the Boysenberry Pie Factory, Frog Forest, Fortune Teller Camp, Thunder Cave, and Weird Woods, before finishing in a celebration at the County Fair.

Guests will follow the adventures of Boysen Bear and Girlsen Bear on their adventure, as they aim to win a prize for their boysenberry pies while outsmarting Crafty Coyote along the way as he tries to steal the pies. Guests join in the action by shotting jelly blasters at the mischievous pie thieves.

“Knott’s Bear-y Tales carries a great significance and evokes an intense sense of nostalgia for those who first experienced the ride as children in the ‘70s and ‘80s,” says Nol Van Genuchten, Vice President Creative at Triotech. “It’s our goal to capture the spirit, creativity and originality that made this dark ride such a success and thus honouring the cherished memories of the original attraction”.

Triotech also recently announced that its XD Dark Ride at Pinballz Arcade in Austin, Texas has been enjoyed by over 45,000 players.

IAAPA announces new Hall of Fame pioneers and Chairman for 2020 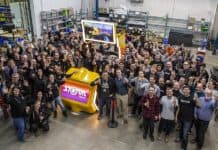 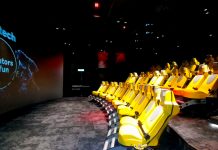