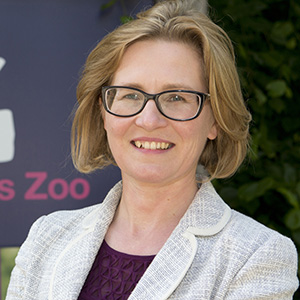 Dr Sharon Redrobe, CEO of Twycross Zoo, has been honoured with the title ‘Inspirational Woman of the Year’ at the 20th East Midlands Chamber Enterprising Women Awards.

The prestigious award recognises the achievements of the region’s business women. It also acknowledges the significant role they play in inspiring others to strive for success.

Over the past three years, Redrobe has revitalised Twycross Zoo both operationally and culturally.

Her energy and determination have driven the zoo’s ambitious £55 million master plan to reinvent itself as a world-class conservation organisation and visitor attraction.

“Having been recognised by one of the most important business bodies in our region is a great honour,” she said.

This award is the latest in a number of honours already bestowed on Redrobe in recent times. She won the Institute of Directors West Midlands Director of the Year 2016 award in the Not for Profit category. Most recently, she was appointed an Officer of the Order of the British Empire (OBE) in the Queen’s New Year Honours List 2017.

Redrobe has been passionate about wildlife all her life and is clear about the role zoos play in conservation. This informs her approach to the many challenges she faces including taking the difficult decision to re-home the zoo’s all-female herd of Asian elephants.

“I am flattered to think that my journey can inspire more women and wildlife enthusiasts to take on a challenge and do their best to fulfil their dreams.

“I am lucky to have a very supportive family and friends and also my wonderful colleagues who are all part of the reason I have been chosen to receive this award,” added Redrobe.

Twycross Zoo first opened its doors in 1963 and became famous for its success in breeding primates. The zoo’s Conservation Welfare Fund has contributed over £350,000 since its creation in 2006. The fund has supported more than 55 conservation and welfare projects in 27 countries around the world.