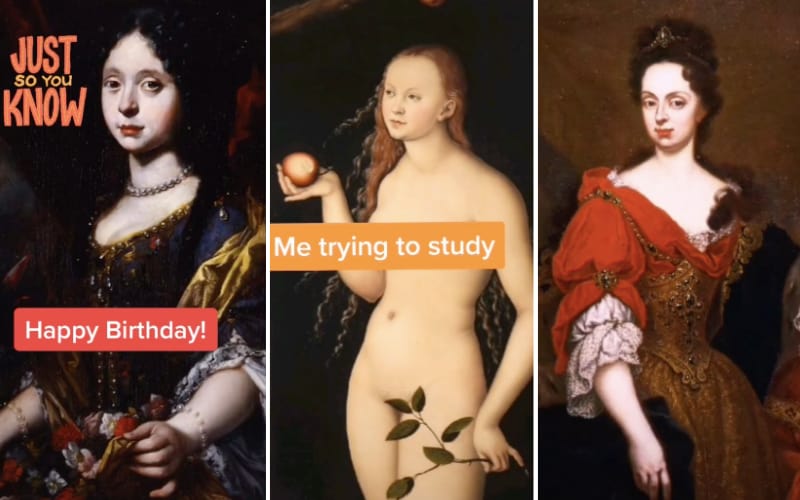 The Uffizi Gallery in Florence, which recently launched its own TikTok account, has revealed that the social media platform has doubled its number of young visitors.

TikTok is a video-sharing social networking service known for its dance and comedy videos. It is owned by ByteDance, an internet technology company based in Beijing.

The Art Newspaper reports that data from the Uffizi Gallery suggests that TikTok is a powerful tool for attracting younger guests.

Eike Schmidt, the director of the Uffizi, told the publication that young visitors have nearly doubled since the museum reopened in the summer.

The Uffizi has been sharing videos of classic artworks dancing to modern music in order to engage with a younger audience, and has gained 55,000 followers so far.

In more recent posts, Maria de Medici (in Jacopo di Chimenti’s painting of her marriage) is depicted misreading her vows. Another shows Lucas Cranach the Elder’s Eve as a student listening to 50 Cent’s ‘Candy Shop’.

Schmidt said that comments from young people indicated that they visited the Uffizi after engaging with it on social media, suggesting a relationship between the two trends.

TikTok star Martina Socrate, who has 987,000 followers on the platform, shared a virtual tour of the museum, which resulted in a 50 percent growth of the Uffizi’s TikTok following in June.

Meanwhile, Madame Tussauds Sydney has joined forces with some of Sydney’s influencers to launch a series of interactive TikTok challenges for visitors to replicate with the stars.

Elsewhere, the Aquarium of the Pacific is using TikTok to educate its fanbase of 340,000 followers after one of its videos went viral during the coronavirus crisis.