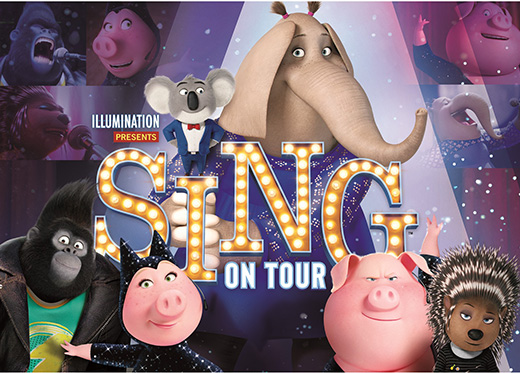 Universal Studios Japan has announced a new project in partnership with Illumination for a musical attraction with songs and characters from the movie Sing.

Sing On Tour will be located in “Minions Park”, the largest Minion Park in the world, beginning spring 2019. The stars of the film break through the two dimensional world to sing the hit songs from the movie in a dramatic live show.

The show attraction will be performed in the world’s first Illumination Theater, equipped with leading edge production quality.

Sing was released in 2016 and follows a group of anthropomorphic animals that enter a singing competition, hosted by a koala who is trying to save his theater. A sequel is scheduled for 2020.

Located in Osaka, Universal Studios Japan reported record attendance last financial year. 14.6 million people visited the park, an increase of 700,000 in the previous year. By contrast, admissions to Tokyo’s two Disney parks fell by 0.6 percent to a just over 30 million.

This year, the results took a hit as a result of a number of extreme weather events.

Hasbro to open the first Nerf Experience in Singapore