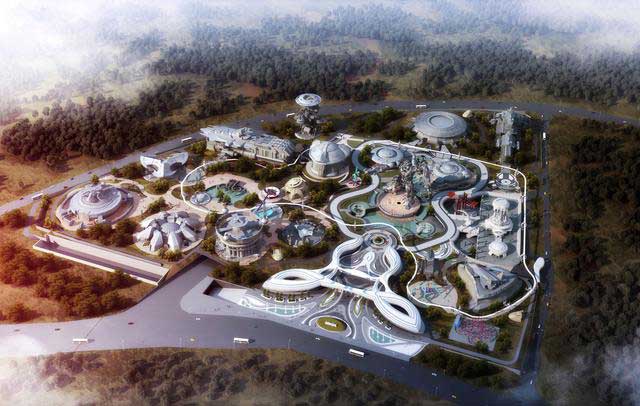 A ground-breaking VR theme park is due for completion in south-west China, with exciting themes of battling dragons and walking with aliens.

An enormous Transformer statue towering at 53 metres (174 feet) takes pride of place. The structure was built out of 750 tonnes of steel, at a cost of £11 million and will provide an awesome sight for visitors.

The theme park, called East Valley of Science and Fantasy in Guizhou province, is slated for completion in December 2017, starting with the first phase, called Alien Base.

The £1 billion project is the brainchild of the Oriental Times Media Corp’s animation unit. It will be part of a vast 1.3 square kilometre (320 acres) development.

Amazing pictures of the theme park under construction can be found here.

VR helmets and other tech gadgets will be handed out to visitors so they can interact with the environment. “The VR park will give players a more-realistic feeling than video games,” said Shi Xiangdong, chairman of Shuimu Animation Co Ltd, Oriental Times’ animation unit that will oversee the project.

The park will also have China’s first VR roller coaster and 13 sections with various kinds of UFOs, offering children an absorbing way to learn more about space and astronomy.

Other proposals include a virtual reality move, a development centre and a state-of-the-art media research facility.

The global VR market is set to reach $30 billion by 2020, with the Asian market a key driver, Tim Merel, founder and chief executive of industry research firm Digi-Capital, said in a China Daily report.

“There are significant concentrations of development in Asia, with the Chinese market in particular giving rise to many homegrown competitors,” said Merel. “China is one of the most interesting markets, with many great innovators and entrepreneurs.”

Shanghai-based Shanda, is ploughing a $350 million investment in the VR sector, according to a company executive.

Robert Chiu, president of Shanda, said the company is introducing The Void theme park to an undisclosed location in China. The Void is a United States-based entertainment company that specialises in VR technologies.

“We will build it (in China) as soon as we have a local partner,” Chiu told China Daily. He added that the VR park gives players more realistic feeling than video games and the construction time will be significantly less than traditional theme parks such as the Disneyland.