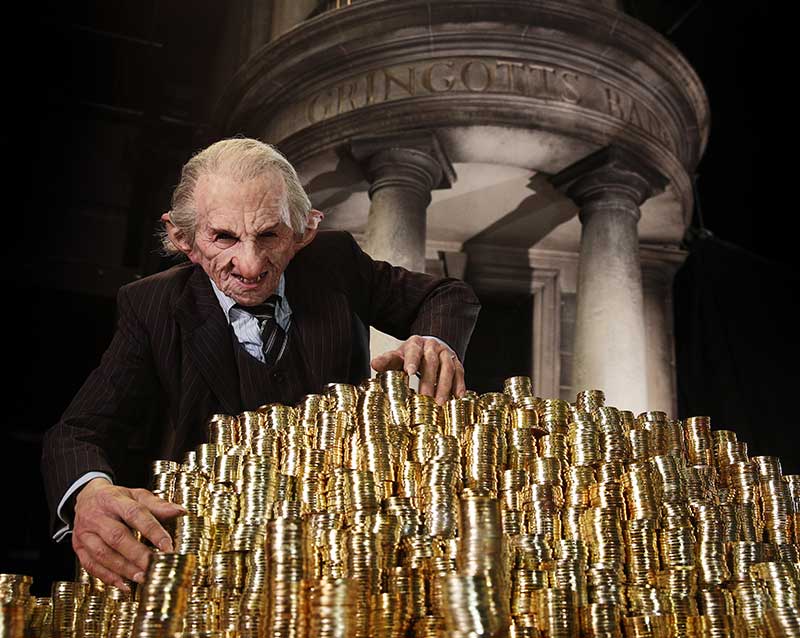 Warner Bros. Studio Tour London – The Making of Harry Potter will unveil its biggest expansion to date with the Gringotts Wizarding Bank.

Warner Bros. Studio Tour London will introduce the permanent addition on 6th April, allowing visitors to walk through the wizarding bank of Gringotts, the Lestrange vault, a gallery of goblins and more.

The grand banking hall will be decorated with three crystal chandeliers and finished with real brass leaf.

The goblin desks will be furnished just as they are in the films – with inkwells, quills, ledgers and piles of Galleons, Sickles and Knuts. Over 210,000 coins were created for the final two Harry Potter films alone.

On display will be the costumes and prosthetics belonging to Bogrod, Griphook and other goblin bankers. The prosthetic masks each took weeks to create, with every hair individually inserted and veins painted by hand.

Visitors will enter the Lestrange vault used to store the treasures of Bellatrix Lestrange including the Sword of Gryffindor and Helga Hufflepuff’s Cup, one of Voldemort’s many Horcruxes. There will be a photo opportunity where visitors can step inside the Lestrange vault and surround themselves with treasure.

In 2017, Warner Bros. Studio Tour unveiled the Forbidden Forest expansion. Visitors can walk beneath the roots of 19 enormous trees each with a diameter of over 12 feet.  A special feature of the tour is allowing visitors to control the weather using genuine filmmakers’ techniques.