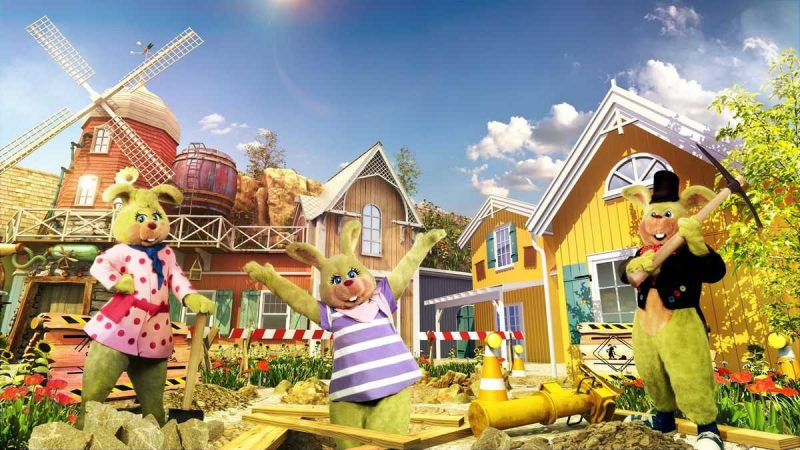 Disney Cruise Line is said to have completed the purchase of a 700-acre piece of property from the Bahamas government. It is located on the island of Eleuthera, and is known as “The Lighthouse Point”. The deal will allow Disney Cruise Line to use the property as a second private stop for their guests; rather similar to what they currently do at their Castaway Cay island. The purchase price is estimated to be somewhere between $250 – 400 million. In addition, this deal will see Disney donate back the 190-acre southernmost tip of the island back to the government to use as a national park.

This has already been expected, and it has been done in California. Now with the announcement of the opening dates for Star Wars: Galaxy’s Edge out of the way, Walt Disney World has also raised their ticket prices.

On the low end of things, the lowest price for a “Value” day ticket will remain the same at $109. However, under the current pricing system where the exact prices can fluctuate day-by-day, the average price of a “Regular” day is about $125, while Peak days can vary quite a bit. This ranging between $139 to $159 per person, per day. The price of annual passes has not yet been changed, but you can almost count on that to be revised before Galaxy’s Edge opens at the end of August.

With Dolly Parton herself present at a 2019 Season Preview event this week, the park announced that their new Wildwood Grove expansion area would open to guests on May 10, 2019. Dolly also confirmed that her new Pirates Voyage dinner theatre show coming to Pigeon Forge will open to guests on June 6, 2019. In other news, it was also revealed that Dollywood’s popular Mountain Slidewinder attraction has now been officially retired after 32 years of service. 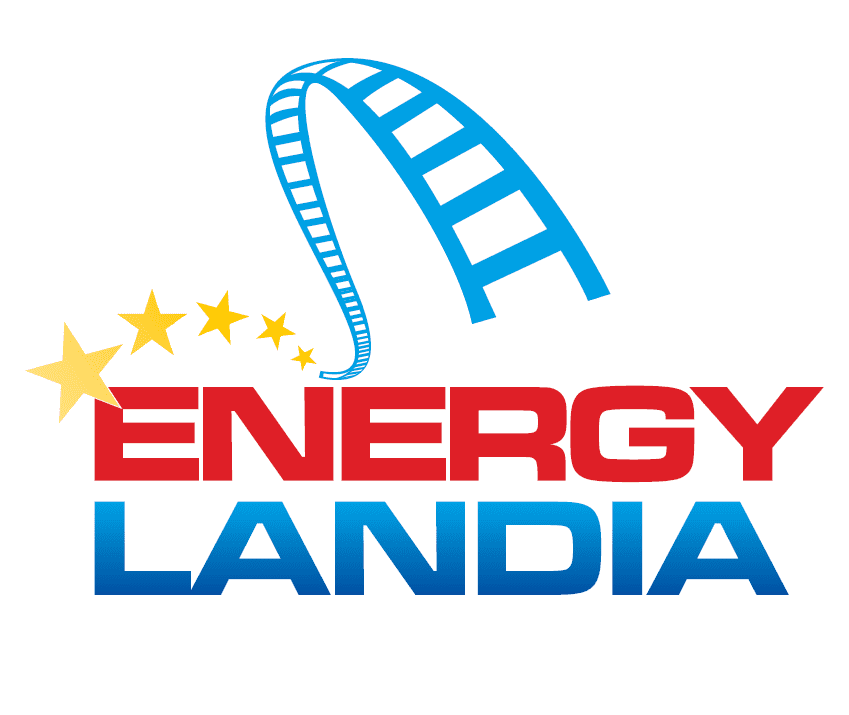 According to photos posted online, a bad storm struck the area around Energylandia in Poland and caused some large sections of the wooden structure for the park’s new Zadra coaster under construction from Rocky Mountain Construction to collapse.

While Zadra wasn’t officially expected to open until 2020, the project has been moving forward at a rapid pace until now, with the belief that it could have possibly been ready to open by the end of 2019… a goal that is now likely unobtainable due to the damage.

Even though early reports had pegged the opening of the new Nickelodeon Universe indoor theme park at the American Dream mall in New Jersey for Spring 2019, latest local news reports indicate that the opening has been delayed and will now open sometime this summer at the earliest.

Sweden’s Liseberg has announced two back-to-back projects over the last week. The first will see the park’s famous Lisebergbanan terrain coaster from Anton Schwarzkopf given a makeover. This will be completed with a new station area, new themed façade and brand new coaster trains.

Meanwhile, the park is also building a new attraction called Underland for 2020. This will be added to the park’s Kaninlandet (Rabbit Land). The new family dark ride will take guests underground to experience the secret world of the park’s green rabbit characters.

The new ride concept comes from Liseberg and Quarry Fold Studio, with the ride system coming from Gosetto SRL, theming from P&P Projects and animatronics from LifeFormations. It will feature a total of 18 4-passenger vehicles, with an estimated ride length of 3 minutes and 20 seconds, and an overall capacity of 850 persons/hr.

It has been confirmed that Wiener Prater in Austria will be putting up the Teststrecke mobile Schwarzkopf looping coaster for much of the 2019 season. The coaster might look familiar to many American coaster fans, and for good reason. It previously ran from 1986 through 2008 at Dorney Park where it was known as “Laser”.

Clementon Park will add four new rides for the 2019 season. Welcoming a sense of nostalgia to the park, three of the new attractions will actually be classic era rides that no park should be without: a Pirate Ship, a Scrambler and a Tilt-A-Whirl. They are all great rides and crowd pleasers that families can enjoy together as well as keep the lines moving. The forth attraction will be a new “Dragon Coaster”. 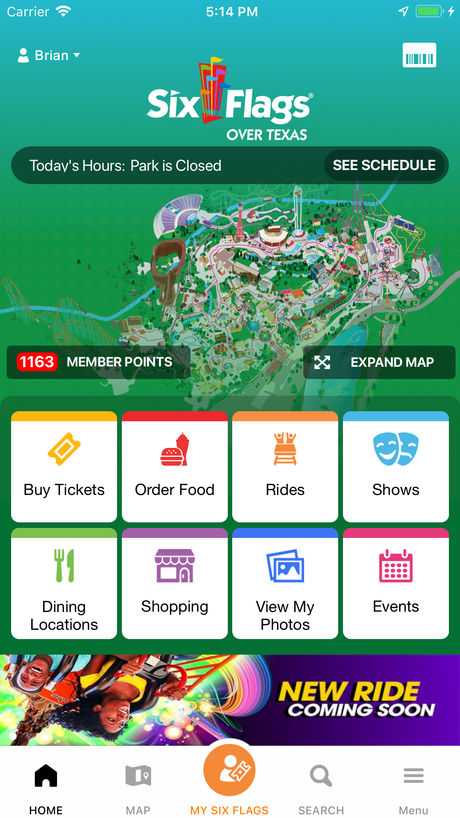 Six Flags will add a major new feature to their app for mobile devices this season, bringing the ability to pre-order food from select restaurants in each park. Guests can make their custom orders on the app. And much like modern fast food apps, they can notify the restaurant when they arrive so that the order can be prepared fresh and delivered without having to wait in a long line to place the order.

Alton Towers has confirmed that they have removed the VR hardware from their Galactica coaster for the 2019 season. The coaster, formerly known as Air, will keep the Galactica name and theme for this season. 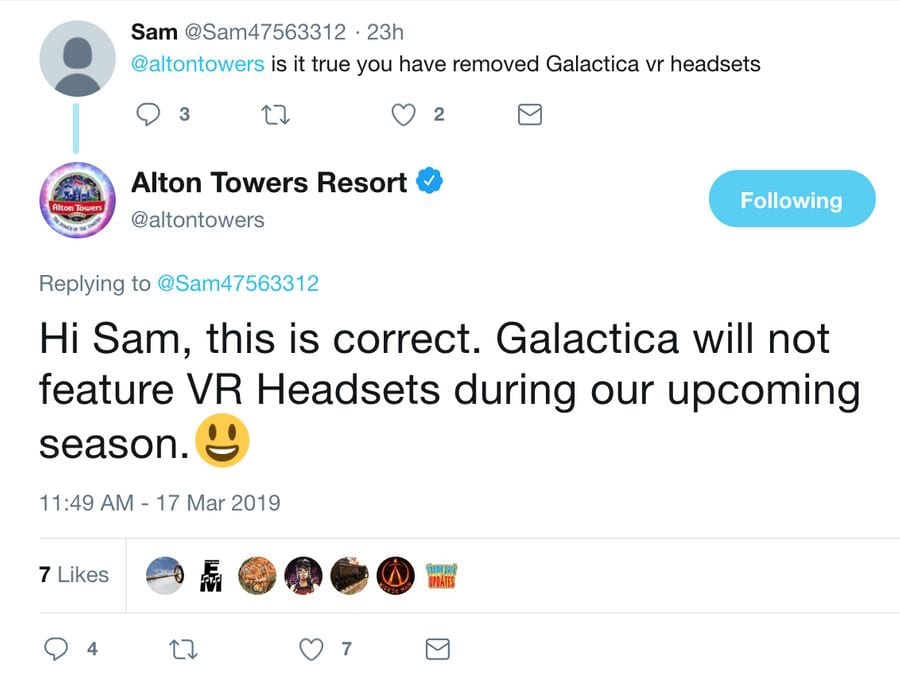 Admittedly, this does not come as a surprise as I believe the same VR system was also added to Kraken at SeaWorld Orlando. This occurred the year after Alton added it to Galactica, only to have SeaWorld remove it entirely a little over a year later.

In other news, Alton Towers has confirmed that their new horror attraction, “The Alton Towers Dungeon” will open on March 23, 2019. There will be an additional charge to experience this attraction.