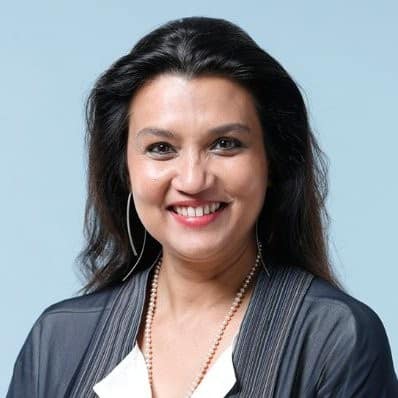 Suhanya Raffel joined the new M+ museum in Hong Kong in 2016 as executive director, and later became museum director in 2019

From 2013 to 2016, Raffel was the deputy director of the Art Gallery of New South Wales in Sydney, where she worked on the museum’s expansion project. Prior to this, she held a range of senior curatorial positions at Queensland Art Gallery & Gallery of Modern Art, Brisbane. During this time, Raffel led several Asia Pacific Triennials of Contemporary Art, as well as working on many major exhibitions.

The long-awaited M+ museum opened to the public in November 2021, when visitors were able to discover its collection of around 1,500 works, set over 17,000 square metres of exhibition space and 33 galleries. The attraction, which is located in Hong Kong’s West Kowloon Cultural District, is also home to three cinemas, as well as restaurants, shops, a ‘mediatheque’, a Learning Hub, a Research Centre and a roof garden with views of Victoria Harbour.

“I firmly believe that the future history of the art museum will be written to a significant degree in Asia,” says Raffel. “Few institutions will be more pivotal to that story than M+, a brand-new centre for visual culture and a world-class landmark for a great international city. M+ delivers the stories from our part of the world, told by voices participating in and influencing the global conversation.”

Raffel was a member of the Asian Art Council at the Solomon R. Guggenheim Museum in New York from 2009 to 2014 and is also a board member of the International Committee for Museums and Collections of Modern Art.

Blooloop named M+, which was originally scheduled to open in 2017 but plagued by delays, in its list of the top new museums to watch for 2021.