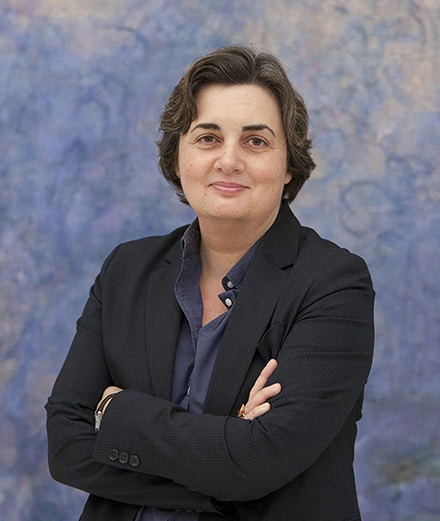 Laurence des Cars stepped into this role in September 2021, making her the first female president of the Louvre in the Paris museum’s 228-year history.

In her role at the world’s most popular museum, Des Cars says her goal is to foster a “dialogue between ancient art and the contemporary world” as well as to widen the appeal of the museum, particularly for younger generations. Des Cars will also review the Louvre’s opening hours to offer a more accessible museum:

“I think the Louvre has a lot to say to young people, too, who will be at the centre of my concerns as president of the Louvre,” she said. “We have to be open a little later in the day if we want young working people to come.”

Speaking about her appointment at the museum, she said: “I am deeply honoured by the trust placed in me by the President of the French Republic and the Minister of Culture in appointing me as head of this tremendous museum. My ambition is to place the Louvre at the core of topical debates, and for it to foster reflection on all issues within society. Through its ‘longue durée approach’, the Louvre gives relevance to the present, it is wholeheartedly contemporary and can therefore speak volumes to today’s youth.

“The recent crisis has had a particularly destabilising impact and has forced us to consider economic balances and to rethink – despite the constraints – the museum visit in terms of an exceptional experience.”

Des Cars studied art history at Paris-Sorbonne University and took her first position as curator at the Musée d’Orsay in 1994.