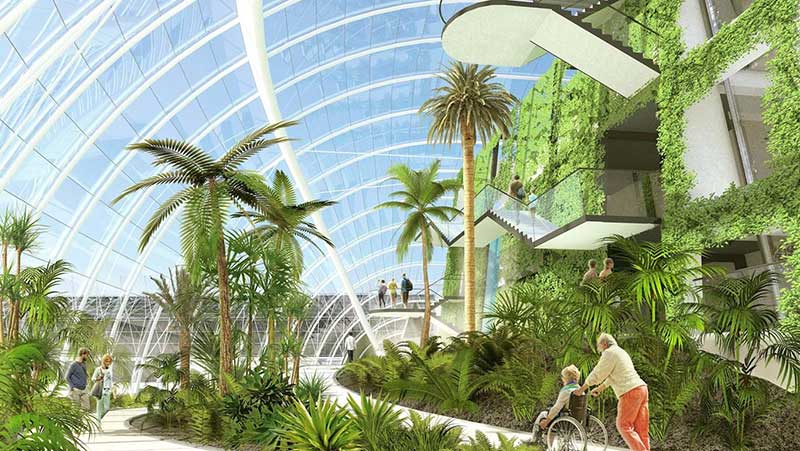 Edinburgh’s Royal Botanic Garden has unveiled its £70 million initiative, which aims to protect the future of its living plant collection and create unrivalled public outreach opportunities.

The project is the most ambitious in the RBGE’s 349 years. It aims to protect its large plant collection of 166,000, many of which are endangered or extinct in their native habitats.

“At a time when the work of botanic gardens has never been more important, Edinburgh Biomes has the vision and potential to attract, excite and engage people of all nationalities and walks of life,” said Simon Milne MBE, Regius Keeper of the Royal Botanic Garden Edinburgh.

“It is potentially the most significant project in the Garden’s history and can firmly consolidate our ranking as one of the top four Botanical Gardens in the world. At its centre, this magnificent new glasshouse has the stature to become our iconic building of the 21st century.”

A new glasshouse, costing around £7.5m, will be the entrance point to a new Glasshouse Experience, taking visitors through the refurbished Front Range and Victorian Temperate and Tropical Palm Houses.

Designed to initially act as a temporary home for the plants during the seven-year project, the new Glasshouse will link with behind-the-scenes facilities such as the Herbarium, Library and Archives.

Edinburgh Biomes will improve RBGE’s research, horticulture, education and infrastructure facilities, providing state-of-the-art facilities for scientists, horticulturists and educators who work in more than 35 countries around the world.

The proposed first phase of the initiative involves the creation of a new, efficient and sustainable energy centre and state-of-the-art plant health suite, which will provide a safe bio-secure propagation environment.

In later phases, members of the public will help with decanting and relocating seasonally sensitive plants.

Previously, the director of Royal Botanic Gardens Kew, Richard Deverell, spoke to Blooloop about the institution’s vital scientific work and its evolution as a world class attraction.