Cairns Aquarium finally opened its doors September 19th.  It’s the first aquarium to be built in Australia in eighteen years and was designed by aquarium specialists Peddle Thorp Architects in association with Ellick & Partners.

The aquarium is set over three storeys and has a 10,000sq m footprint.  It is home to more than 15,000 animals indigenous to the Great Barrier Reef and Queensland’s far north.

Cullen has lived on the Sunshine Coast, a beautiful marine area, for most of her life. She was initially attracted by marine biology and so took an applied sciences biology degree. 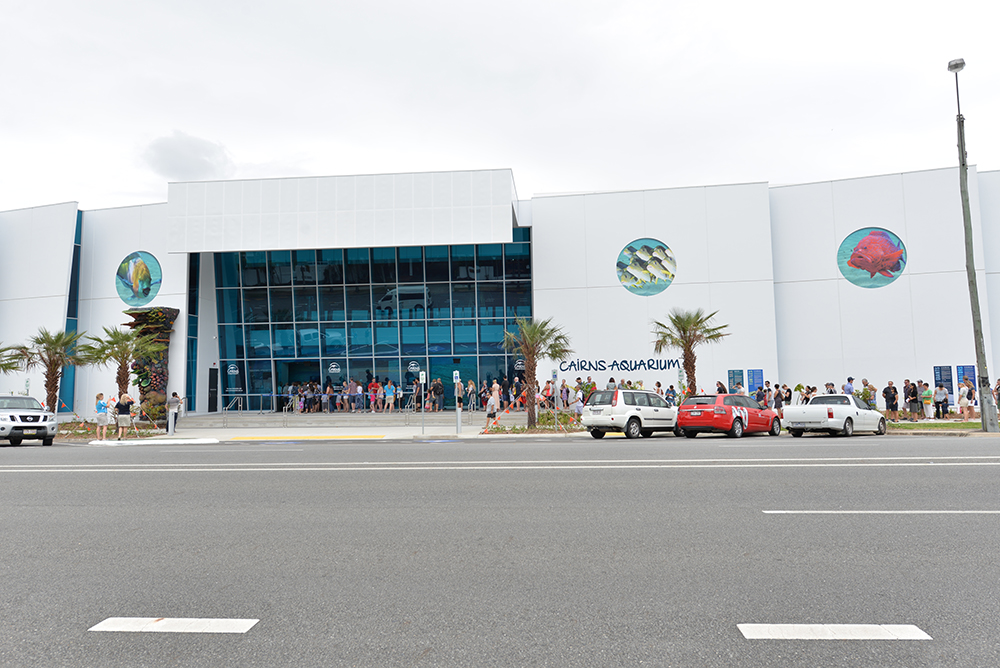 Curiously enough, the first use of Cullen’s degree was in the brewing industry, followed by a stint in the electricity industry. However her roles were in sales and marketing, not biology: “Regardless of the fact that I have a biology background, I’ve always worked in sales and marketing, or general management,” she says.  “I moved through a number of different senior management positions, moving back to the Sunshine Coast when I realised that the SEA LIFE Aquarium at Mooloolaba was looking for a sales and marketing manager. I then moved very quickly into a general management position, and I spent five years in Mooloolaba, as General Manager of that particular aquarium.”

After four years, she then took on a position with Sunshine Coast directly.  Her first role was as Tourism Development Manager, followed by a shift to Events Marketing Manager.

Six years ago, she reached out to the owners of the Cairns Aquarium, Andrew Preston and Daniel Leipnik.

“I had heard that they were going to be building an aquarium,” says Cullen. “So I contacted them, and they were able to use me as a consultant during the commercialisation process.  Then, when we got closer to the day when they were ready to open, they asked me to come on board as the General Manager.”

Understanding the tourism background to the region was key.  Knowing how to attract visitors to the region in general was instrumental in attracting them to the aquarium in particular.  “It’s a combination of sales and marketing, tourism and biology that brings me here to Cairns Aquarium,” says Cullen. 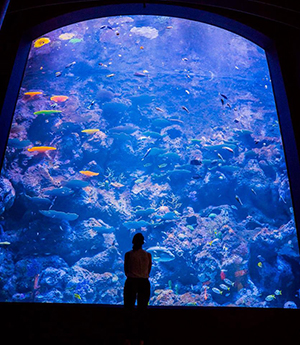 The genesis of Cairns Aquarium

Cairns Aquarium is a privately funded aquarium.  It has been built by nature enthusiasts Andrew Preston and Daniel Leipnik.

Initially they came to the region to visit the Barrier Reef.

“When they went out on the Great Barrier Reef, they noticed that there were a lot of people who didn’t get in the water,” explains Cullen. “Either they couldn’t swim, or they might have been afraid of stingers.  Or maybe the weather might have been a bit rough for them. They went all that way, but didn’t actually see the animals.”

This prompted Preston and Leipnik to come up with the idea of building an aquarium in Cairns.

“Over the course of three or four years, they worked diligently to get the development plans together,” says Cullen.  “They contacted Peddle Thorp Architects who, working in association with Ellick & Partners, came up with the unique external design, which is a real architectural statement.”

The building’s exterior resembles a series of tectonic plates.  It symbolises the geological creation of the Great Barrier Reef and Northern Queensland’s rainforest-covered mountains. 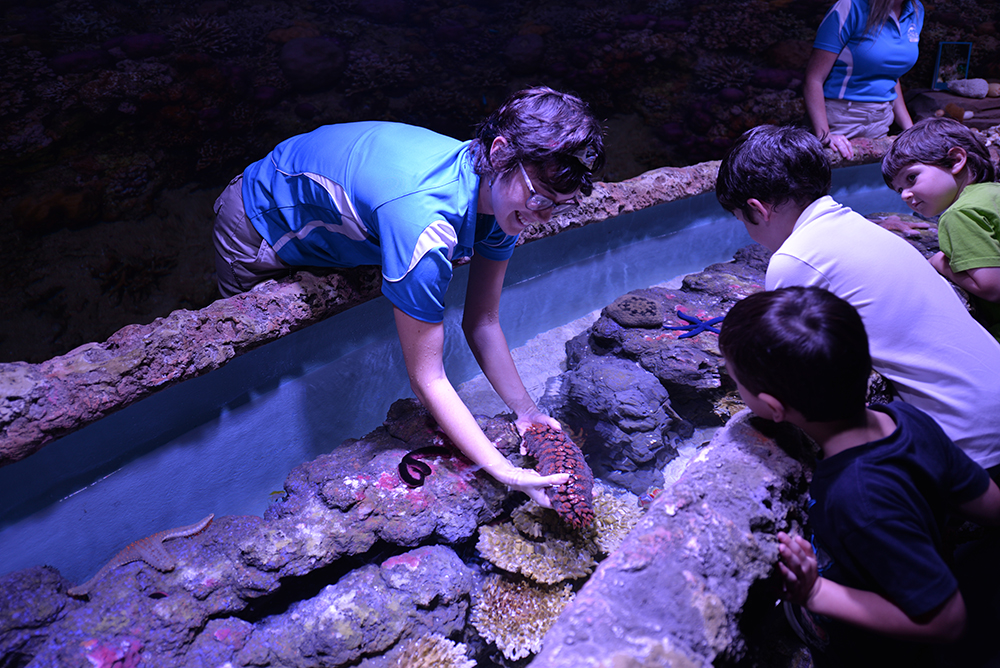 Inside, the aquarium uses technology and innovative theming. “The owners have engaged with the best people in their field,” says Cullen. “So they brought in AAT to create the incredible immersive visitor journey.”

There are 71 displays with 40 aquarium exhibit tanks. “We have replicated ten ecosystems from those particular regions,” says Cullen.

Queensland’s Advanced Aquarium Technologies (AAT) is the world leader in aquarium infrastructure.  As Blooloop reported, the company was recently in the news for producing a huge, perfectly clear, 120mm thick, 8.4 x 3.15 meter acrylic panel. The large format, PLEXIGLAS acrylic weighed over 4 US tons.

These will house around 15,000 animals.  “They will be on display, plus interpretive signage,” says Cullen. “There will be an immersive visitor journey that follows a drop of water that falls onto the range.  It filters into the system of creeks and streams.  Then it runs through the rainforest, through the mangroves, out through the barrier reef, through the Coral Sea, and ultimately to the drop-off.

Bruce Eernisse of Banggai Consulting also provided aquarium design and construction consultancy services as well as project management support to the main contractor on the project.

The visitor journey is completed with an underwater viewing tunnel. The showpiece 1.7-million litre Oceanarium allows visitors to be surrounded by sharks, rays and other fish.  It therefore brings the Barrier Reef right into the heart of the city.

“We are the only aquarium in the world to showcase exclusively the species of tropical North Queensland,” says Cullen. “Specifically that includes the Great Barrier Reef and the Wet Tropics rainforest (both World Heritage listed areas), the animals of Cape York, the Gulf Savannah, and the Coral Sea.”

The only deep reef tank in Australia

“We have the only deep reef tank in Australia,” says Cullen. “It’s one of only three in the world, the others being in Bangkok and Korea.”

The tank measures 10 m by 7 ½ m and replicates the drop off on the continental shelf. “That is a big feature,” says Cullen. “Then in addition we have the 1.5 million litre Oceanarium that will contain a school of scalloped hammerhead sharks, reef sharks, leopard sharks, stingrays, coral trout, and trevally.  So, the beautiful fish and predators you see all through the Coral Sea. Plus we are also going to dedicate a significant part of the aquarium to the rainforest species as well.

“We will also have endangered and rare animals on display that can’t be seen anywhere else.  These will include emerald tree monitors, freshwater sawfish, Jardine River painted turtles, and ribboned pipefish.”

It’s not just aquatic species either.  “When visitors are in that rainforest area, they will be looking at snakes, lizards, turtles, monitors,” says Cullen.  “We have quite a number of different terrestrial species as well as aquatic species, both fresh and marine.” 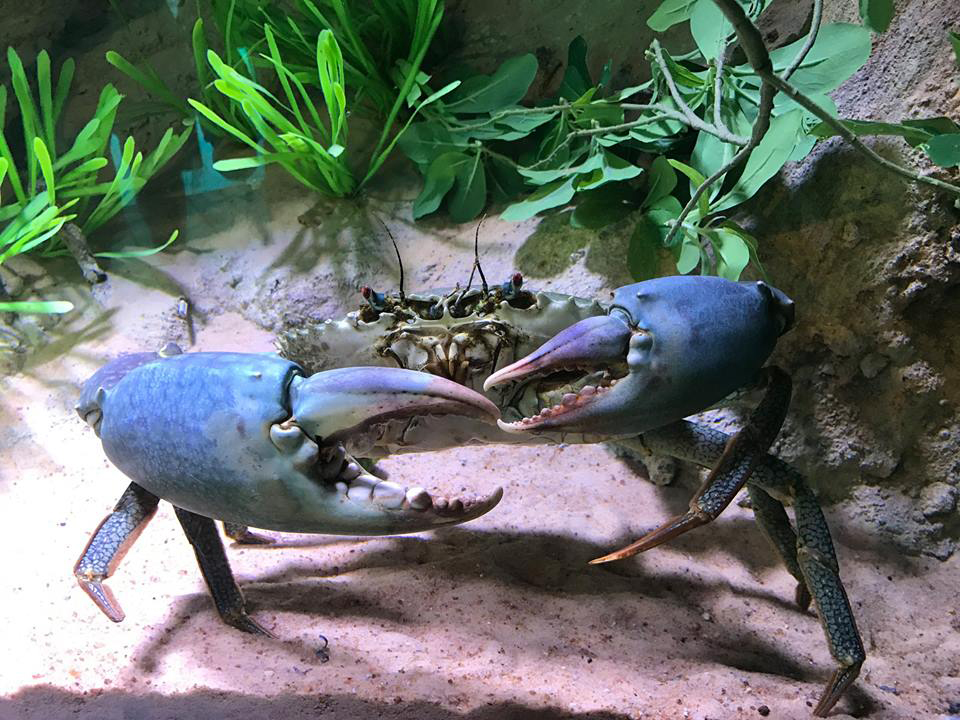 Even before the official opening, people have been awestruck at the offering. “People are amazed at how much there is to see, how much is being put in place, and how big the viewing areas are,” says Cullen.

Touch tanks form an essential part of the hands-on experience.  There are two touch tanks – one terrestrial and one marine.

Sharks are always a key attraction and the aquarium has a host of shark experiences on offer.  “Around this side of Christmas we will launch our shark sleepovers,” says Cullen. “People will have the opportunity to stay for the night in the aquarium.

“In the New Year, once our sharks have settled down, we will be introducing shark snorkelling, shark diving, and then, at a later date, stingray feeding.

“The fact that people will get to see hammerhead sharks up close will be very exciting.”

There are even sharks in the restaurant.  The indoor air-conditioned Reef Room has its own 70,000 Under the Pier shark habitat taking centre stage.

Animal welfare is at the forefront

While the aquarium has been conceived as a unique and engaging visitor experience, animal welfare is at the forefront of everything it does.

“There has been a conscious decision not to have animals in the aquarium that don’t thrive in captivity,” says Cullen.  “We have no marine mammals, or birds.  We look at the species in terms of the size and nature of the tank.  Even if there is an animal that we would like to have, if it doesn’t have the ability to move around freely we won’t bring it in, or we will go for something slightly smaller.

“At the end of the day, our overall objective is to have people engage with these animals.  We want to generate a level of respect and awareness for them.  Then, hopefully, they will engage like we do in wanting to preserve them.”

Conservation is the motivating force

Another visitor experience is the behind-the-scenes tours of Cairns Aquarium. These allow visitors to understand more about the conservation work being carried out.  “We have a sea turtle rehabilitation centre here, so it will be possible to learn about any animals in rehabilitation”, says Cullen.

“There is a dedicated research and development facility here. It will undertake reproductive biology programs. These will focus on critically endangered animals, like the freshwater sawfish. The first objective would be to get the reproductive technology to the point where we would be able to breed animals for our own use, to rule out wild collection.  Then the next step would be to produce enough animals to service other aquariums and zoos without having to go back to wild collection.  The ultimate stage would be to have enough animals that we can actually start to repopulate.

“There are a number of critically endangered species in this particular area, and we will be looking at attempting to reverse the decline of the species numbers.”

Not for profit facility to be established

A further step for the research and development arm will be the establishment of a not-for-profit facility.  “We already have an agreement with the Bendigo Bank, which has launched a Cairns Aquarium Barrier Reef credit card.

“A proportion of the sum that we receive from the credit card will go into our not-for-profit arm.  This will buy back the cane fields and replant them with the native rainforest vegetation.  The aim is to reduce the run-off into the Great Barrier Reef.” 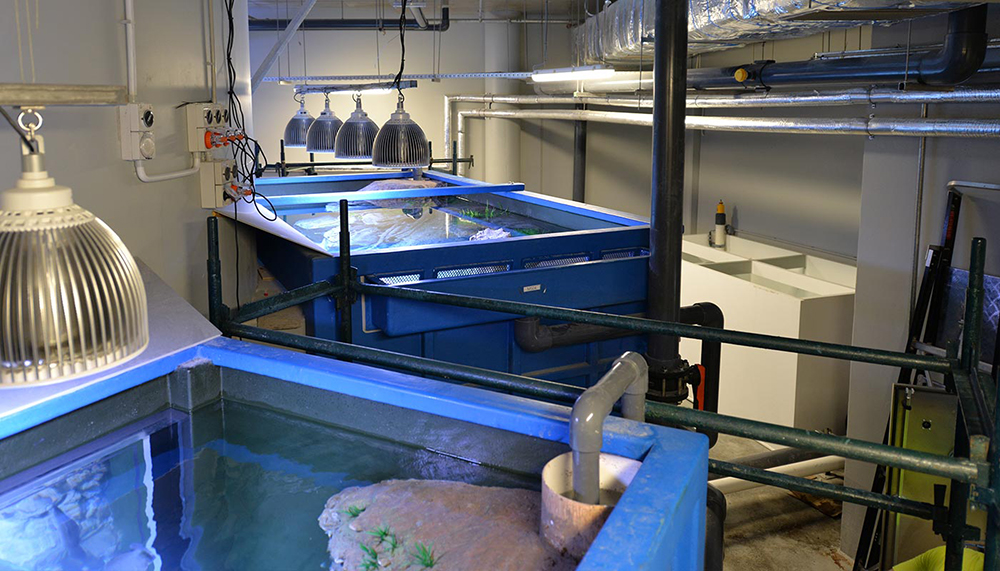 The aquarium is an ambitious project.  Its opening date has been postponed a number of times, because of the challenges inherent in a complex build.

“We only took possession of the aquarium three weeks ago and since then been working around the clock to be open to the public this week.”

However, one of the major challenges, she explains, is that the Cairns Aquarium is a closed water system.  “That also brings some challenges with it as far as the maturation time is concerned – you really are at the mercy of the water chemistry.

“When we took possession we had to make all of the saltwater. We had 60 tonnes of salt brought in.  We blended that with the local water and pumped it through the aquarium.  Then we bring in top ups of salt water by container from the Trinity Inlet, which is at the front here in Cairns. We are only one block from the water, but we don’t have direct access to it.”

“We’re right in the middle of the city, within walking distance of most of the accommodation and the major attractions here,” says Cullen. “It’s a perfect location.”

She is confident the aquarium will prove a hugely popular attraction.  However the aim isn’t just to bring in large visitor numbers but to change people’s hearts and minds.

“Cairns Aquarium will allow people to see animals that they wouldn’t normally see in the wild, engaging with them with a level of respect so that they will want to preserve them,” she says.  “That’s also how we see the role of the aquarium – to introduce, educate, and generate respect, and potentially change behaviours.  At the very least we want people to understand that humans are having an impact.  That human impact can be reduced or managed to preserve these animals for the future.”

Cairns Aquarium opened on the 19th of September.