zoOceanarium Group, a specialist in the new generation of aquarium and zoological facilities,  is dedicated to creating fun and educational experiences through a combination of components that revolve around interactivity and hands-on experiential learning. Its overarching interest is in creating a crossroads between science centres and animal attractions.

In order to do that successfully, team members need to be 100% bought into the vision. Training is, of course, vital and in 2017, zoOceanarium Group’s Green Planet property was awarded the Brass Ring Human Resources Excellence Award from IAAPA in the category of Best Innovation in a Training Program (Amusement Parks and Attractions, Including Water Parks, With Annual Attendance of Less Than 1 Million).

Beyond training, however, the key is really building a dynamic team culture. One that sees team members supporting each other in the day-to-day effort to engage with each and every guest. One solution is to create a Culture Committee. Traditionally, a culture committee consists of members of each department that discuss, plan and proactively drive matters pertaining to company culture.

The St. Louis Aquarium at Union Station opened on December 25, 2019. Opening an Aquarium any time is a challenge, but opening one just prior to a pandemic created several new challenges.

Of course, we experienced the same issues many similar organizations did. But, in addition, when we reopened we had the challenges of creating team spirit and a culture of collaboration with a team that hadn’t ever worked together under normal conditions. We decided one way to jump-start creating the culture we desired was to establish a Culture Committee.

Each manager identified a team member within their department to serve on the committee and the operations manager and the executive director committed to serving as contacts for the Committee. At the first Committee meeting, the team members identified and elected a chairperson. The Committee then decided on its structure, opting to meet twice a month over lunch.

The Committee further requested that the operations manager and executive director commit to attending one meeting per month, while the second meeting would allow the Committee to have a discussion without management presence. This structure works well and continues to this day.

However, as with many new initiatives, some aspects of the original plan worked and some did not. Here are some tips on creating a successful Culture Committee, based on our experiences.

When we first launched the Culture Committee, we established a broad mission for the group. Its functions ranged from managing responses to our team suggestion board to funnelling team concerns to management and creating opportunities for the team to get to know one another. As the Culture Committee met twice a month, we quickly determined that this mission was too broad. It was not achievable within the framework of available time.

So, the Committee discussed the mission and opted to focus on opportunities for the team to get to know one another. By focusing on the positive aspects of building a team and allowing managers to focus on addressing any challenges, the Committee became more excited and creative in their work.

It is important to represent diverse departments. However, we discovered it is even more important to choose team members who really want to serve the mission of the Committee.

Once everyone in the room was 100% invested in the initiatives, the energy at the meetings transformed into one of spontaneity, openness and creativity.

Be prepared for this question at an early meeting of the Committee. However, we discovered we did not have to set a specific budget ahead of time. Instead, managers were honest with the committee that we didn’t know how much was appropriate. We challenged the Committee not to limit themselves based on budget but to try to be realistic.

So far, we have been able to make every initiative work within our current budget framework.

As leaders, we all have an outlook as to what is beneficial and right for the organization. But sometimes, the Committee has come up with an idea that was not part of that original outlook.

If there is no immediate and obvious downside, do it anyway. It might mean losing a bit of control, but the committee will be stronger and more cohesive for it. In doing this, we have discovered some jewels we would not have done, had we shut down the ideas.

Managers attend, but we don’t lead

The executive director and operations manager attend each meeting, but we are there to answer logistical questions only. We do not lead or steer the meeting in any way. Our role is to facilitate implementation.

This has empowered the committee to be creative and work as a team to create an amazing culture for the Aquarium.

What has come out of the Culture Committee’s work so far?

Thank you “cods” which are given peer to peer for help at work or for a broad acknowledgement of great attitude. We have received 464 thank you cods since we launched the program in October 2021. Each recipient of a cod gets to enter a raffle drawing for one of three prizes each month.

Prizes range from the opportunity to view a shark feed back of house to tickets for a riverboat cruise (which were obtained through a ticket trade).

For the holidays, we challenged each department to decorate a door in our back of house area. The entries were wildly creative and brought each department together. Our marketing team decided they were so good that we would post them on social media to determine a winner.

The winning department received a pizza party. The competition was spirited and friendly and provided a huge boost during a very busy time of the year.

We host a “friends and family night” during our KenTortoise Derby filming each year. This year, our Culture Committee decided to run some games during the filming. For instance, we had tortoise races (team members had to reach the finish line wearing a green laundry basket on their backs like a tortoise shell) and a lettuce eating contest.

The games added a great spirit to an already fun evening and brought the whole event to a new level.

The Culture Committee has added a spirit of collaboration and a bit of zaniness to what we do every day. As a result, it has benefited our guest experience and our brand in ways we never imagined. We are lucky to have the Committee as part of the fabric of our overall efforts to make the Aquarium a great place to work and engage our guests. 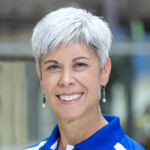 Tamera (Tami) Lash Brown has proven expertise in strategic planning and implementation, management of board and staff, project management and the development and execution of effective integrated marketing and fundraising communications. She particularly enjoys building collaborations for effective mutual benefit and mentoring new leaders. As executive director of the St. Louis Aquarium at Union Station, Brown spends most of her time setting the vision, overall direction and operational standards for the Aquarium.