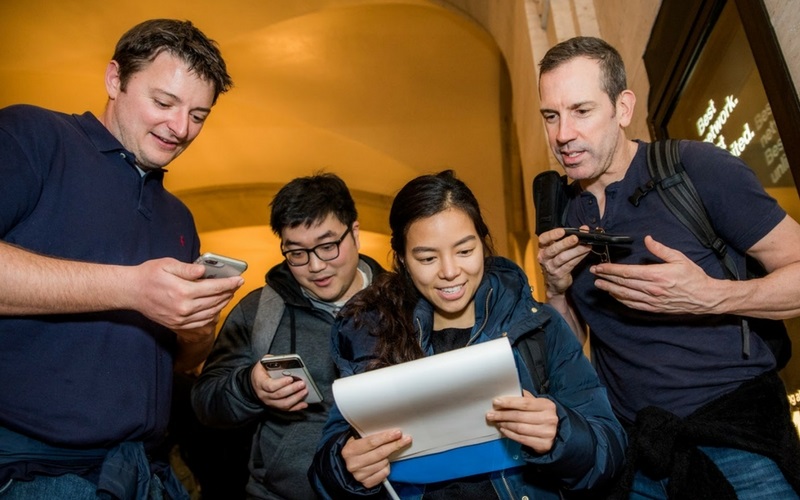 The creators of Museum Hack are continuing to subvert the traditional museum experience with ScavBoss, a cultured yet millennial take on the scavenger hunt. 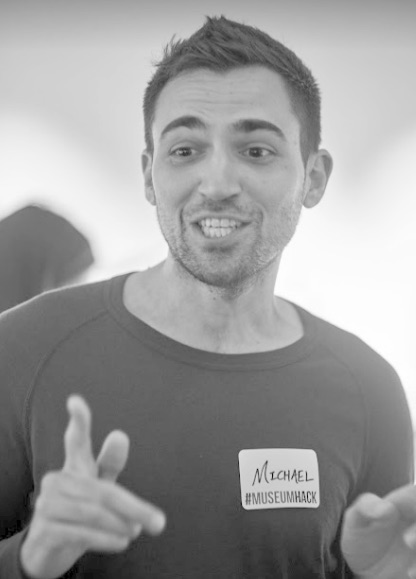 Started almost by accident, Museum Hack is a business that has grown from strength to strength. The brainchild of entrepreneur Nick Gray, who then brought in marketing expert Michael Alexis, Museum Hack subverts the traditional museum tour and provides a fast-paced, fun-packed experience.

Blooloop documented the rise of Museum Hack in 2016 but its intrepid founders now have a new venture. Building on what they were already doing, Gray and Alexis have added new locations, competition and cryptic clues to create ScavBoss, New York City’s most unusual scavenger hunt.

Before diving into the new business, Alexis (above right) caught us up on how Museum Hack is doing.

“Museum Hack is doing really well. At the time we last spoke, we were just operating in New York City, Washington DC and San Francisco. Since then we have expanded to include regular public tours in Los Angeles and Chicago as well,” he said.

The company has had a lot of success with themed tours. They have one based on Game of Thrones and another dubbed the Boy Wizard Tour.

“We had a lot of success with a tour that started in New York about feminist empowerment,” Alexis said. “We call it Badass Bitches. It has been very good for bringing in new audiences to the museum. To show them this great art and the artists who might not have been appreciated in their own time.”

Museum Hack also has a museum consulting wing that worked with around 30 museums last year. They provide interactive workshops for museums to show them how they could improve their own tours. 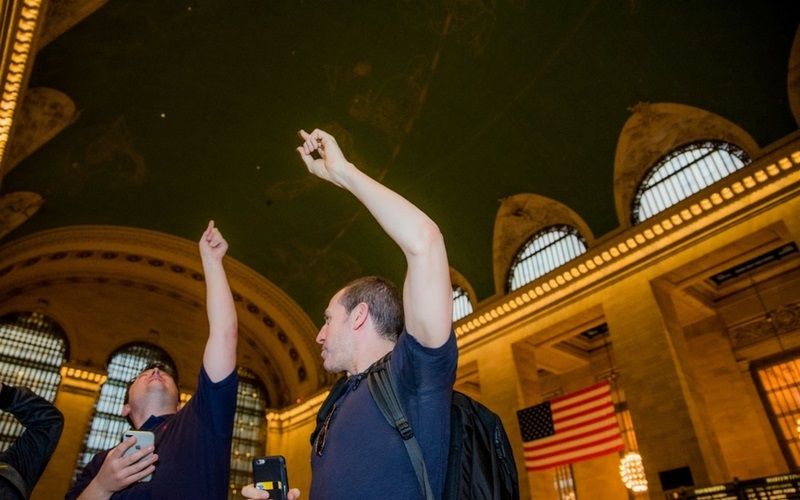 “Then, alternatively, there is our full-on training option,” Alexis added. “This is where we work with the docents and guides at the museum, showing them how we put it together. How we tell the stories that we do and how they can do it for themselves in their own space.

“We tell them that it doesn’t have to be exactly like us. But if they follow these principles, they can create a great experience.”

So how did ScavBoss grow out of Museum Hack? According to Alexis, it was due to the limitations of the latter. Due to being a third party operator, they were limited by museum’s opening hours and availability.

Alexis said: “We had a lot of clients, either private guests or corporate groups, that wanted to come with us. But they can only come in evenings during the week when the museum is closed. Or, even if it’s on the weekend, the hours may not work.”

To deal with this problem, Alexis and Gray started hunting around New York to find alternative locations with more flexible hours. They have experimented with private museums that have longer hours and even tried an outdoor scavenger hunt. 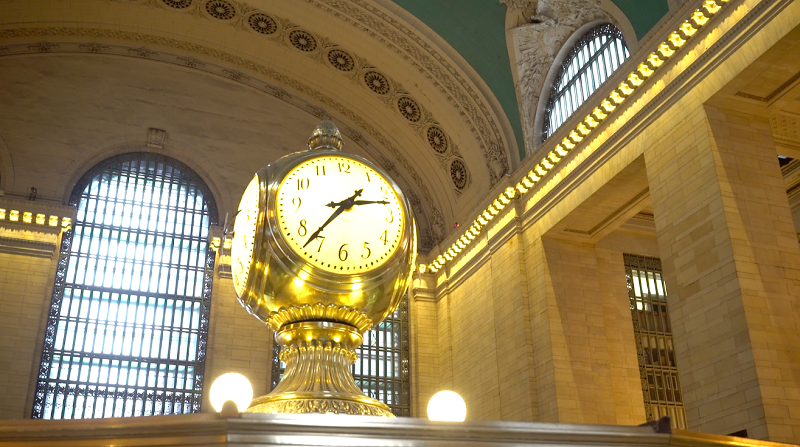 However, Grand Central Terminal has been by far the most successful experiment. The iconic Beaux Arts building has an enormous marble staircase, 22m windows and a constellation-studded ceiling.

“We approached it not through the frame of, how do we make this exactly like Museum Hack,” Alexis said. “But how do we apply the Museum Hack principles of engagement and experience to this whole new thing?”

The Museum Hack tours showcase methods commonly used to engage children. They re-imagine the conventional tour format and enable guests to forge a connection with the museum and its artefacts.

ScavBoss does the same, using a Grand Central scavenger hunt as the basis for engagement. It taps into the need for fast-paced activities in an adjustable form, for high expectations and shorter attention spans.

“You meet your guide who will give a short presentation including a little video about saving Grand Central,” Alexis said. “It looks at times in its history where it has been under threat of either heavy renovations or being torn down. Then the guide will give you the materials for the scavenger hunt and launch you on your way.”

The ScavBoss experience, which takes around 90 minutes, uses Fuji film products to enhance it. 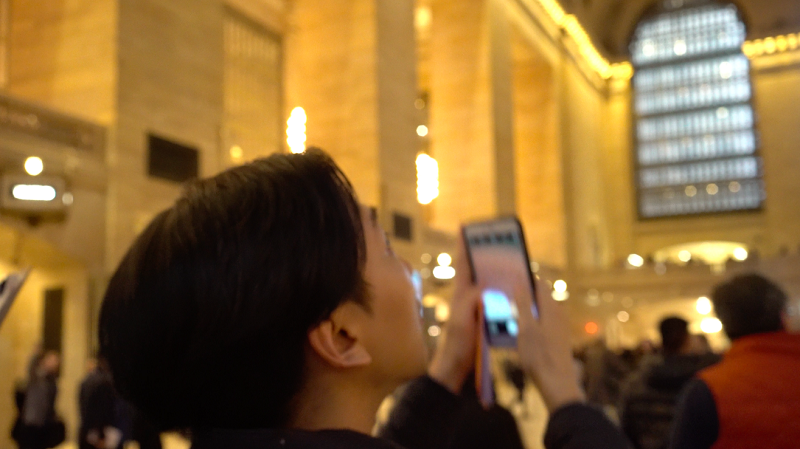 “We have found this adds a really interesting element,” Alexis said. “Fuji film has these cool Instax printers that we give people and they use as they go around collecting clues. They can print out the pictures and put them on what is almost a Bingo card. So it’s a little bit like a tech-enabled scavenger hunt. It’s cool.”

The Grand Central hunt is intended to be a collaborative group activity with sizes ranging from three to five people. When he did a demo of it, Alexis was surprised to find how much was hidden in plain site.

“I had been in there before and I didn’t know that there was a big seafood restaurant under the place,” he said. “Or that there are little VIP lounges, or that there is a tennis court.”

Some of the clues are more subtle. For example, on the iconic constellation ceiling is one square tile that has not been cleaned since the mid-1990s.

“It’s something about restoration,” Alexis said. “They have preserved the original space, so it’s just a little thing. Something that you never look for and that you would never know unless somebody prompted you to look for it.”

A millennial frame of mind

For the most part, ScavBoss targets the same demographic as Museum Hack. Focusing on millennials with a smattering of Boomers and Gen-Xers that have a millennial frame of mind.

While Alexis hopes the concept will grow, expanding to new venues and countries, Grand Central is the focus for now.

“Having made this big expansion to include San Francisco, Los Angeles and Chicago, we want to make sure that we service them the best that we can,” he said. “This year we are really exploring how we reach more people for our public, private and corporate tours.”

Assuming the year goes well then the company will look at further growth.

“We are looking at how we operate at more museums in the US and even internationally. But we don’t have a strict timeline on it. We want to concentrate on ensuring we are serving our existing cities the best we can first.”