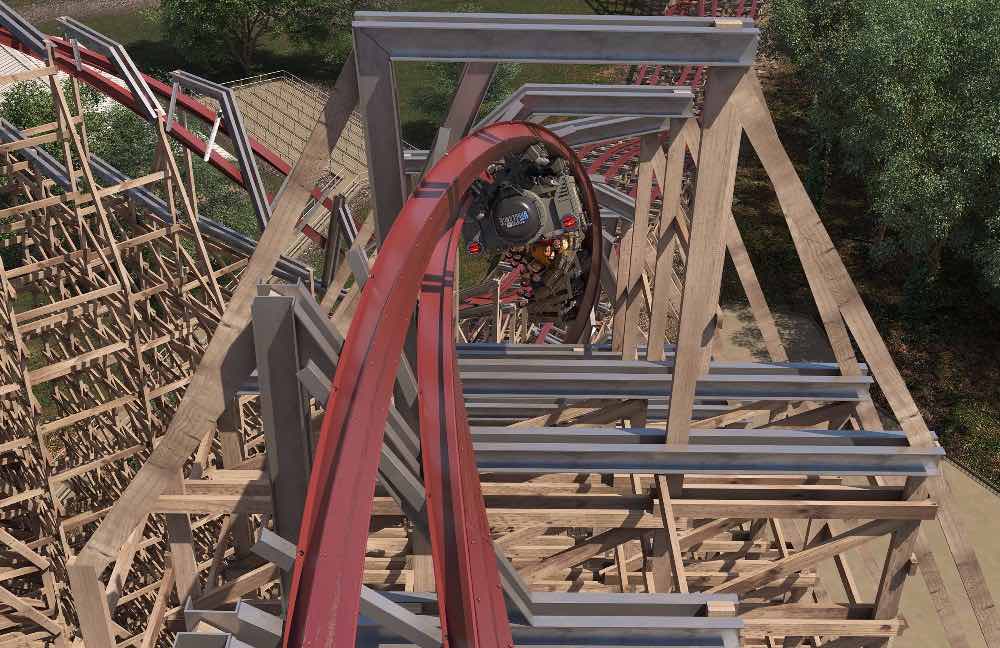 The Ohio theme park is building Steel Vengeance over the foundations of its previous Mean Streak roller coaster.

The new coaster is being constructed using smooth, steel track built over a massive wooden structure.  The hybrid coaster is set to break a whole series of records.

Steel Vengeance will stand at 205 feet tall, 44 feet higher than the original Mean Streak.  This makes it the highest hybrid coaster in the world.  It will also become the fastest hybrid coaster, reaching maximum speeds of 74 mph.

At 5,470 feet, it is set to be the longest hybrid coaster.  It will have the steepest drop (90 degrees), and also the most inversions (four).

It’s been clear for months that Mean Streak was being rebuilt.  Crews from Rocky Mountain Construction, a company renowned for its wood-coaster conversions, gave the game away when they arrived shortly after the ride closed last year.

Fred Grubb, president of Rocky Mountain Construction, says that the redesign and rebuild was one of the most challenging projects his company has undertaken. “It’s enormous,” says Grubb. “All the elements we put in are very complicated and hard to do.”

The new coaster has numerous air-time hills. It also contains a twisted snake dive with a half-barrel roll and a brief moment of hanging upside down.

“It will probably be the wildest coaster at Cedar Point,” says Jason McClure, general manager of Cedar Point.

The old coaster, Mean Streak, which was launched in 1991, was also a record-breaker. However it had recently begun to lose its lustre. “Our guests told us that Mean Streak was not compelling anymore,” says McClure. “That led us to say, ‘What are we going to do with it?’ ”

He says the obvious answer was to “do something that’s never been done.”

Construction should finish within three months, says Grubb.  Then detail work, including the building of a new queue area, will start.  There will be around a month of testing in the spring.

The two minute, 30-second ride is planned to launch the first weekend in May.

RMC will also be building new trains for the ride.  There will be 24-passenger cars, with lap restraints instead of over-the-shoulder harnesses.

McClure is confident that guests will love the new ride.  “From the top of the lift hill to the end of the ride, it’s going to be a blast,” he says.

The Holocaust Museum of Montana planned for Bozeman