As BNP Paribas employees and shareholders celebrated another profitable year during the event at the Altice Arena in Lisbon last January (2018), Christie’s Pandoras Box media servers, a Christie Widget Designer and six Boxer 4K30 projectors delivered content based on the dragons Viserion, Drogon and Rhaegal from the hit TV fantasy franchise.

An impressive 64 x 12 metre (210ft x 39.5ft) screen on a truss covered with white Lycra was used to imitate the shape of a dragon’s body. The annual meeting also featured actors, fire-throwers and acrobats.

Europalco, one of Portugal’s leading event and show companies was appointed by the bank to organise the entertainment. The company in turn partnered with Grandpa’s Lab, a studio specialising in stage design and content for mapping projections. The two firms have worked together on some of Portugal’s most memorable audiovisual events.

“BNP Paribas were looking for something really impressive, a setting that would cause a big impact and a highly dynamic emotional curve,” says Grandpa’s Lab project manager Pedro de Castro. “As the event was inspired by Game of Thrones, we created a story to lead spectators through this unique visual universe.”

The Pandoras Box system managed the content powered by the projectors. One of the biggest challenges faced, was coordinating the images precisely on the irregular screen surface, including the scales on the dragon’s central ‘torso’ section.

“Adjusting the images to the scales was a real nightmare,” says Europalco CEO, Pedro Magalhães. “We were able to resolve the problem thanks to the Pandoras Box warp plug-in. The images were projected to perfection, at all times filling the different parts of the screen and maintaining the lighting strictly inside its edges. Pandoras Box never lets you down.”

De Castro was also impressed with the Widget Designer. “Its mapping tools are excellent. I also like the fact that it allows you to create complex timelines without the need for third-party software.” 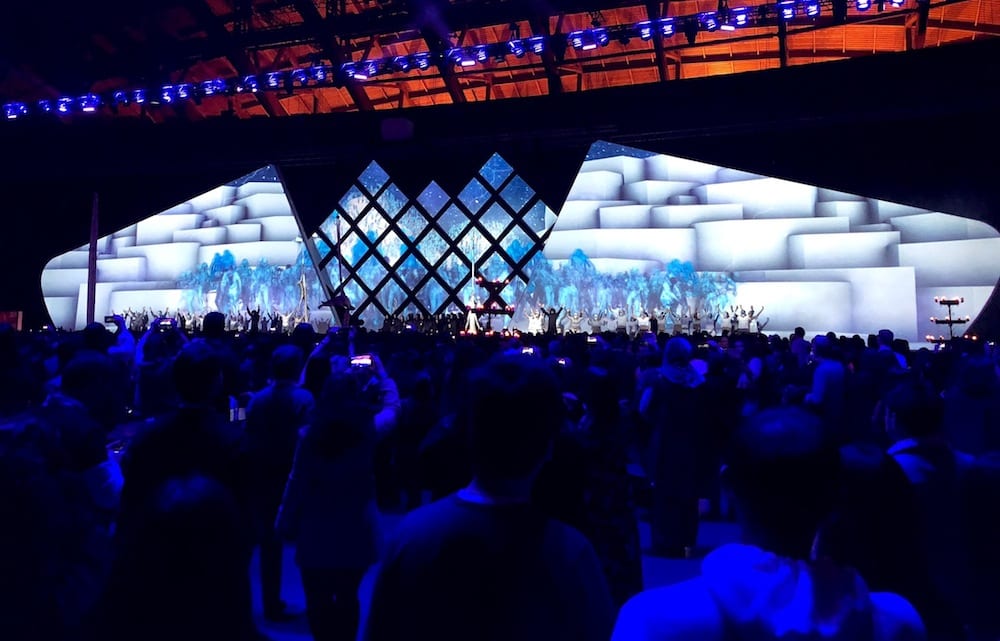 It wasn’t just the AV professionals that were impressed the show. Some BNP Paribas employees even noted the clarity and brightness. “I never believed that I would be so impressed by projection,” said one member of staff. “The screen was so big and spectacular that it almost overwhelmed you. The 3D effect of the dragons convinced you that they came out of the screen and flew over our heads.”

Meanwhile Christie Widget Designer is an intuitive software tool used to create customised control applications for shows. It allows all sources and screens to be easily connected with a single powerful interface. Widget Designer translates the various different protocols so that they are able to interact with each other, either automatically or on demand, with single or multiple controls, like the follow-up system, industrial sensors, PCs, tablets and even game controllers.

Christie’s display solutions and projectors contribute to capture the attention of audiences around the world – in projects of all sizes. Here’s a recent installation at the Museu de Arte Popular in Lisbon.