Lagotronics Projects, the media-based attractions specialist, is celebrating its 40th birthday this month. After four decades in the business, Mark Beumers (CEO) and Carlo Görtjes (founder and President) look back at the company’s development and successes.

Lagotronics Projects is excited to be celebrating the milestone of 40 years in the industry. The company was founded on July 1st, 1979. Now, Carlo Görtjes (founder and President) and Mark Beumers (CEO) look back at 40 years of Lagotronics.

“It’s a very special year for us,” says Beumers, “which has been celebrated by visiting Europa-Park with our whole team; the Dutch and international Lago-crew. Also, we have launched some 40-years activities, like the ‘Flag-On-Tour’ pictures, PR moments in magazines and online platforms, nice historical facts and images on social media, and so on.”

“The company as it is now can’t be compared with 40-years ago,” Görtjes adds. “Did you know the founding in 1979 was a must at the time? At the age of 22, I already was a DJ in bars, clubs, campings and other parties… While I was still in school! More and more bookings were made, and it turned out to be better starting an official company. Soon after that, I needed storage for all the equipment. From here it really began to get moving.” 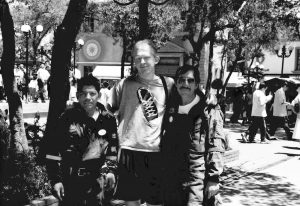 One of the company’s very first theme park projects was ‘Mansion de la Llorona’ – a dark ride at Six Flags in Mexico City. Lagotronics installed the complete show control for this attraction in 1999. Beumers reflects on the project,  “I was only 21 years old and briefly employed at Lagotronics Projects when I was asked to make the big trip to Mexico City! That time, there were no mobile phones, I didn’t have a PC at home and I didn’t even have an email address. This makes five weeks in Mexico a long time!

“Just before I left, I bought my first digital camera with minimum pixels. I used my colleague’s laptop to email a picture to my uncle since he was the only one I knew with an email address. He printed the picture and brought it to my mother, who responded indignantly: ‘this picture is even sooner here than my son himself!’ One thing I also won’t forget is the way the equipment was brought to the park: in an old Mexican open truck, fully stacked from bottom to the top with about 2 million of Euros with electronics: PCs, amplifiers, speakers, etcetera. One hard brake and it would have gone pretty wrong!”

Görtjes recollects a memorable experience of his own, travelling to China to conclude two major contracts in just three days, “No one believed that I would succeed. The negotiations were tough, but in the end…. I did it!”

During Beumers’ first years at Lagotronics, he often worked as a project manager for the technical show control of national and international tv-shows. Görtjes also did a lot of tv-shows himself. Some of the technical advances we are accustomed to today presented a series of new challenges a the time. The pair often had to improvise and problem solve on the go.

“There are so many moments, small and big ones, we can’t describe,” Beumers says. “Each project is unique and custom made. This means we have to deal with the greatest challenges. However, we always manage to solve things before the deadline.”

Görtjes adds, “From show to show, during the first week, new show-games were invented for the next one. So we had two weeks to build them. Believe me, it always was a huge technical challenge. Sometimes things went wrong during the rehearsals: sensors didn’t work, or a cable broke… But we always did it: during the show it always worked!”

“A company isn’t worth anything without its people,” says Görtjes. “I’m proud of the fact that we have very little staff turnover. I’m also very proud that we’ve always belonged to the top high-tech companies with the most innovative products and techniques. Even though the company sometimes changed its strategic focus, within a few years we belonged to the top. When we believe in something, we go for it. From voting systems to LED lighting, from complete experience centres to attractions and rides in theme parks; we never give up. We have had many moments of euphoria, with many to follow.”

“Even though there were big custom projects with major challenges and deadlines, it is at all times: ‘The show must go on’. You can only do this together with a team,” agrees Beumers. “You won’t manage alone.”

A big thank you

“I would like to say ‘thank you’ to all colleagues and former employees for their commitment and their faith,” says Görtjes. “We also want to thank our customers, partners and suppliers for their trust.” Beumers adds, “I fully agree. Besides this, I’d like to thank Carlo very, very much for having faith in me and the other two directors, giving us the opportunity to continue this great company.”

Together, the pair are looking forward to the next ’40-Years-Of-Fun’ because, as they say, the show must go on.