Disney has shared some major details of new attractions at Star Wars: Galaxy’s Edge and Epcot, Mickey Mouse’s 90th birthday celebrations and more coming to its resorts in Florida and California.

Disney Parks, Experiences and Consumer Products chairman Bob Chapek spoke recently at the Destination D: Celebrating Mickey Mouse event organised by official Disney fan club D23. “We are currently in the midst of one of the most extraordinary periods of expansion in our history,” he said.

During the get-together at Walt Disney World near Orlando on November 17, Chapek made announcements about the new Star Wars: Galaxy’s Edge lands opening here and at Disneyland Resort in Anaheim, California, in fall (autumn) 2019. He also discussed the ways in which Disney will be celebrating Mickey Mouse’s 90th birthday, as well as more about its plans for Epcot.

E-ticket experiences and a symphonic soundtrack at Galaxy’s Edge Each Star Wars: Galaxy’s Edge will feature attractions called Millennium Falcon: Smugglers Run and Star Wars: Rise of the Resistance. Disney guests can take the controls in one of three unique and critical roles aboard the Millennium Falcon. Meanwhile on Star Wars: Rise of the Resistance, they can join an epic battle between the First Order and the Resistance, including a face-off with Kylo Ren. These two ‘e-ticket’ experiences, paired with the land’s interactive components and integration with the Play Disney Parks app, will allow guests to become galactic travellers as they live their own Star Wars stories in a galaxy far, far away.

In addition, Chapek provided a sneak peek at the Star Wars hotel coming to Walt Disney World (WDW). Themed around a luxury starship, the property will feature many authentic Star Wars details.

Mickey Mouse’s 90th birthday was on November 18. Disney will be celebrating the character that started it all for the next 12 months.

This will include the opening next fall of the first ever official Mickey Mouse theme park ride. Mickey & Minnie’s Runaway Railway will be located at Disney’s Hollywood Studios – the same WDW park that will debut Star Wars: Galaxy’s Edge. The rollercoaster ride will transform a two-dimensional cartoon into an entertaining real-world experience.

The celebrations have already begun at Disneyland Resort. The World’s Biggest Mouse Party continues with Get Your Ears On – A Mickey and Minnie Celebration, which will bring new entertainment, food and merchandise to the California resort. On January 18, Mickey’s Mix Magic will light up Disneyland Park after dark with music, projections and lasers.

The Disney Cruise Line will host a Mickey & Minnie Surprise Party at Sea on its Disney Fantasy ship next summer. Disney fans will also enjoy the recently opened Mickey: The True Original Exhibition in New York City. This runs until February 2019.

The Epcot of tomorrow

The Ratatouille experience coming to the France pavilion at Epcot’s World Showcase will be called Remy’s Ratatouille, Chapek revealed. Visitors can already enjoy a Ratatouille dark ride at Walt Disney Studios park at Disneyland Paris resort. At Epcot, guests can also look forward a Beauty and the Beast sing-along, as well as an update to the O Canada! 360-degree show.

As from 2020, there will be a new version of Epcot’s night-time IllumiNations spectacular. It will celebrate Disney music with massive floating set pieces, custom-built LED panels, choreographed fountains, lights, pyrotechnics and lasers. But before IllumiNations returns, there be a limited-time experience called Epcot Forever. Described as “a true celebration of this timeless park”, it will play from next fall. 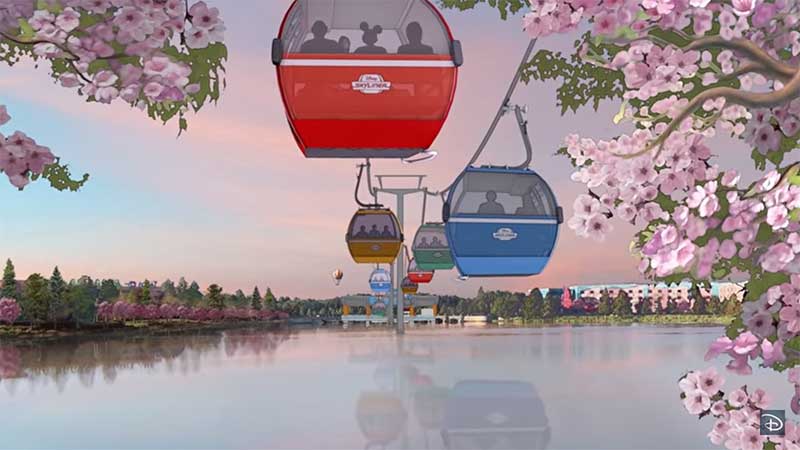 As from 2019, transfers between the various theme parks, hotels and other guest facilities at Walt Disney World will be a little easier thanks to the new Disney Skyliner cable car system. During Destination D, attendees got their first in-person look at gondolas that will transport visitors to their favourite WDW destinations when it debuts next fall.