Universal has filed a patent for AR sensors that detects the rider and generates an augmented reality animation within a ride.

The rider controls the AR animation

The controller generates the augmented reality animation once the presence sensor indicates there is a guest present. Then the facial and skeletal recognition sensors provide information to the controller that modifies the animation based on the guest’s face and body.

Whilst the patent allows for four different AR sensors, not all of these sensors may be in use on the ride.

Using the skeletal and facial recognition sensor together would provide a realistic AR animated figure based on the guest’s movements. The guest would simply have to move their head or arm to “interact with and/or control the augmented reality animation.” 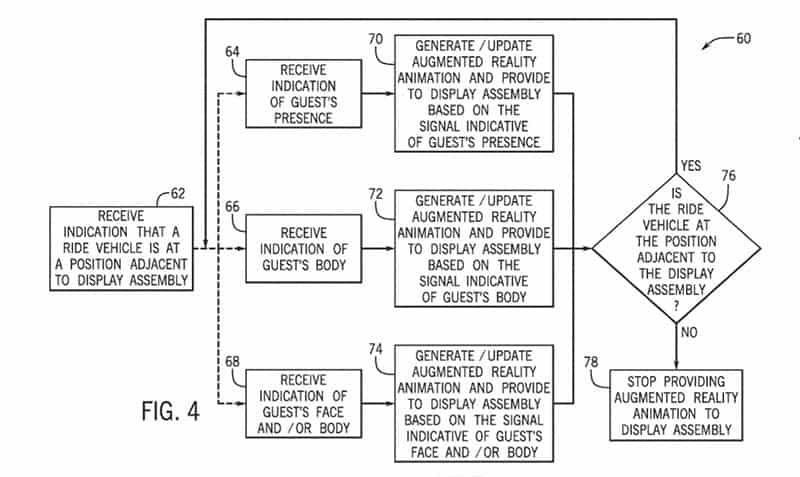 The patent allows for many different configurations of the ride system. For example, guests could be restrained by a lap bar or overhead restraint. The ride vehicle can be changed to accommodate different numbers of guests. These guests may face sideways, forwards, or move throughout the ride.

An AR system like this could negate the need for controllers or shooters within a ride. Guests could instead use their own body control an animated figure playing a shooting-style game, as in the Men in Black ride. Furthermore, it could reduce the need for AR goggles which can be costly.

In a post-COVID-19 world, reducing the need to touch controllers or items is more hygienic and is likely to be more appealing to visitors.

Universal recently filed a patent for an in-ride sanitisation method that would clean glasses, goggles and handles within the ride.

The immersive nature of this AR technology could be used in the new rides at Super Nintendo World in either Japan, California or at Universal’s new Epic Universe park.