Thanks to an agreement between China’s government, Toronto and Calgary, Er Shun and Da Mao have already spent five years in Toronto. They will spend the next five years at Calgary Zoo in the custom-built Panda Passage. The cubs will return to China in 2019, but the zoo hopes that Er Shun will conceive again (by artificial insemination) – and that there will be Calgary-born cubs before too long.

Blooloop caught up with Dr. Clement Lanthier (below), CEO of Calgary Zoo, who spoke about conservation, the zoo’s transformation following the devastating flood of 2013 and preparing for the pandas.

Lanthier spent around twenty years as a vet and a curator before moving to Calgary to lead the animal care department. He has been CEO for almost fifteen years.

Calgary Zoo is operated by the independent not-for-profit Calgary Zoological Society. Founded in 1929, it is the oldest registered charity in Alberta. According to Lanthier, the zoo began life as a small menagerie on an island close to downtown Calgary.

Although the menagerie evolved over the decades, it was a 1980s campaign to ‘ban the bars’ that heralded a major transformation. Zoos began to think differently in terms of display and how animals were kept. There was suddenly a greater focus – which continues to this day – on animal welfare, larger habitats, more sophisticated and complex enrichment.

Today Calgary Zoo is Canada’s most visited zoo. It is home to a diverse collection, mostly from Africa, Eurasia and North America and has established itself as a leader in wildlife conservation. In 2017, the zoo invested $3.6 million in conservation programmes.

“In the 1980s there was another important change. The zoo acquired a property south of the city, where it started to breed endangered species for release programmes,” explains Lanthier.

“That became a major part of our activities. Now we have an extensive research department that is focusing on the science of reintroduction and translocation of endangered species.”

Lanthier sees the presence of the pandas as a way to open a discussion, not just about the issues facing pandas, but about other endangered species that may have a lower profile.

“This is a tremendous opportunity for the Calgary Zoo to talk not only about pandas, but also the less charismatic endangered species; species that are equally or even more at risk, but that don’t get the same kind of rock-star recognition that the giant panda gets normally.”

“Pandas are cute, they’re beautiful, but they are not the only species at risk. It is our responsibility to take the resources from one species to support another.”

The zoo knows a lot about coming back from the brink. In 2013, right in the middle of its preparations for the arrival of the pandas, disaster struck.

“A little over one third of the zoo is on an island. That island was completely covered by mud and water, in some areas up to two metres deep.”

Despite the scale of the devastation, the zoo was determined to looked forward: “In the fall of 2013, we started rebuilding the zoo.”

This took time and resources. The flood had caused around 40 million dollars’ worth of damage to the property. This included everything from boilers, ventilation systems and kitchens to animal habitats. Parallel to this, the zoo was under pressure to finish the panda accommodation in time.

“The zoo had to be ready to provide the best experience possible for the pandas, but also for the visitors,” comments Lanthier.

“We needed to expand the parking lot, to expand capacity on the island. And, we needed to extend some of the trails, a new ticketing system, new washrooms. We also needed to have, obviously, the best habitat possible for the giant panda.”

The zoo wasn’t short of space and landscape, but there were changes that needed to be made in order to accommodate the pandas. These included a new suspension bridge between the island and the north shore of the zoo. The zoo also added a flood protection system. All in all, it turned out to be a huge transformation project. In total, the improvements came to just shy of $100 million.

Ready to welcome the pandas

“We are very pleased to report that everything has been completed. We are ready to welcome the pandas here in Calgary,” confirms Lanthier.

“No one will be able to recognise the elephant space, which has been completely transformed and entirely redesigned with a lot of trees, rocks, streams and logs. It’s quite complex. We have two quite large indoor habitats for the pandas, [comprising] a landscape with a stream and a lot of vegetation.”

The roof of the former elephant building has been opened up to allow for a large number of skylights. This has improved the quantity and quality of the sunlight for the plants that enrich the indoor habitats.

“We also have two large outdoor habitats, one of which will be off display. This means that if we need to isolate an animal it will not be confined inside. It will also have access to quality space and a complex habitat outside, without being overlooked by visitors.

“This is what we committed to the programme when we signed up to these animals coming to Calgary. We will provide the best care possible, and a complex enrichment programme, to those animals.”

The zoo predicts that the presence of the pandas will significantly boost visitor numbers. Lanthier’s projection errs on the side of caution.

“We have had pandas previously, in 1988,” he says. “Back then, increased visitation due to the pandas was 69%. 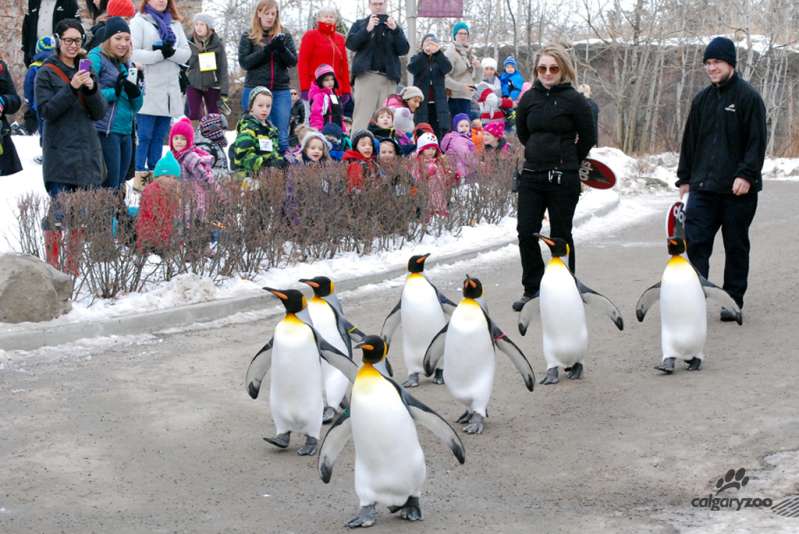 “The average attendance of the zoo for the last few years has been 1.2 to 1.3 million visitors. That’s significant for a community the size of Calgary. In 2012, when we opened the new Penguin Plunge habitat, we experienced just over 1.4 million visitors. So, our projection for this year is 1.5 million visitors.”

He adds: “We have to manage the operation of the zoo responsibly, to make sure that we are not compromising any of our conservation and research projects by inflating our revenue and not delivering on our business. It’s a prudent projection, but we need to keep in mind that we are vulnerable to the weather. We’ll see.”

The design of the panda habitat allows for the fact that the pandas will only be inhabiting it for the next five years.

“In our 2012 masterplan, we already planned for shifting from panda to orangutan. We intend to transform or adapt the panda space to accommodate them.

“There are a lot of orangutan that are available within the conservation breeding programme, the SSP (Species Survival Plan) or the EEP (European Endangered Species Programme). I think we are going to be able to provide a very nice space for those animals in five years’ time. We will have to transform part of it, but we have already built the back of the space to meet the strength and intelligence of orangutan.”

The zoo’s evolution continues as Lanthier plans to move an increasing amount of ticketing online.

“The previous system’s capacity was not sufficiently robust to make that move,” he explains. “Now, we are confident that we will be able to shift a large portion of our business to online.”

Lanthier is also keen to provide ‘a significant discount online’ at various times of the year.

“We need to make sure there is a financial incentive for people to come during the weekdays, or outside July and August when we are already operating close to capacity.”

‘Conservation without money is just a conversation’

“The zoo has been successful for many years here in Calgary. This is why we have been able to grow our conservation breeding and conservation reintroduction sides,” he says.

“A decade ago, we had 1.5 FTE in our research department; now we have 20 FTE. The department is solely doing research, they are not working here at the zoo. They are doing research in the field on a variety of species, mostly on the reintroduction or translocation of endangered species. This is possible only because of the financial success of the zoo.”

“I want to make this very clear,” says Lanthier. “Conservation without money is just a conversation.”

Panda Passage is scheduled to open at Calgary Zoo on May 7, 2018.