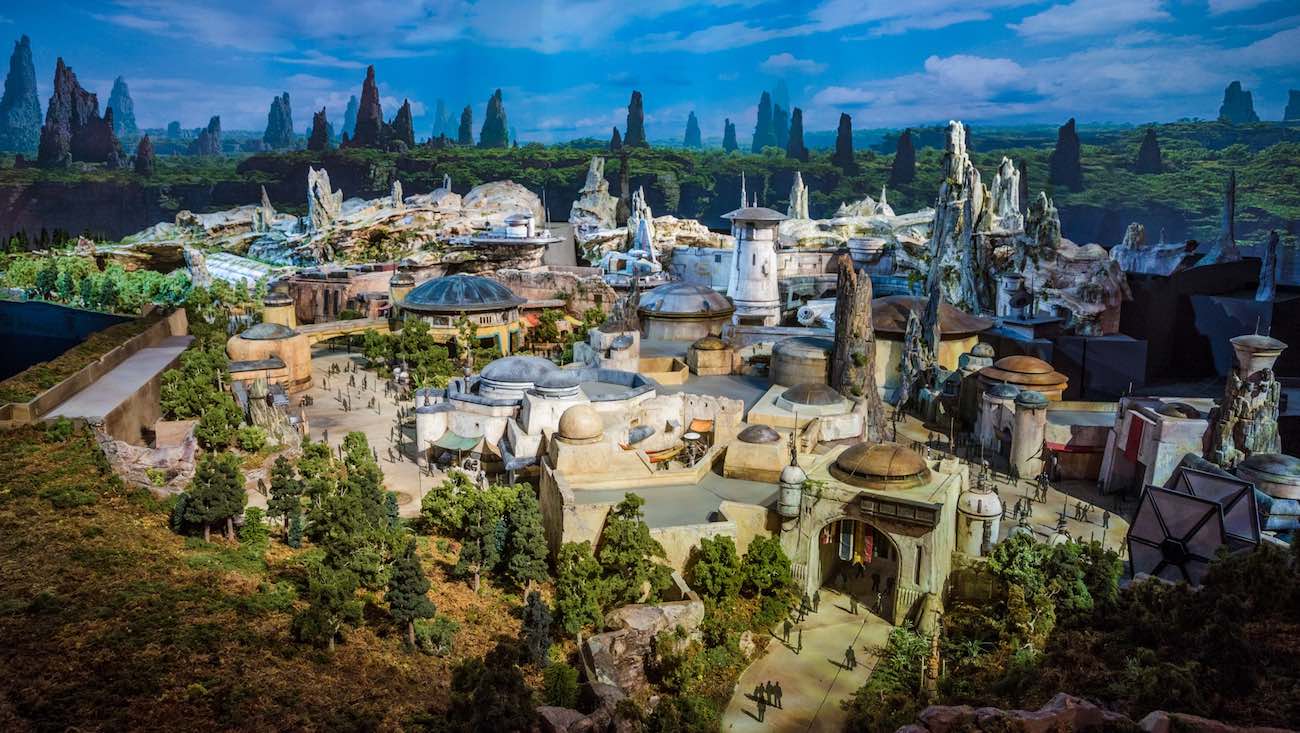 The opening day of Star Wars: Galaxy’s Edge will attract huge crowds (and create huge queues) at Disneyland next summer. So how will the park cope?

Up to 200,000 people could descend on Disneyland for opening day of Star Wars: Galaxy’s Edge in Summer 2019. This could overwhelm the Anaheim theme park with 10-hour lines, swamping parking and traffic in the area.

That’s the astonishing prediction from theme park experts. They expect Star Wars: Galaxy’s Edge to be one of the biggest grand openings in industry history.

Bill Zanetti is an Orlando, Florida university teacher who studies theme park design, operations and management. He expects 200,000 people to line up to be the first inside the new themed land.

“The number is based on what I believe is the actual interest,” said Zanetti, who teaches theme park courses at the University of Central Florida. “That’s just how many people I expect to descend on the resort on the first opening day.” 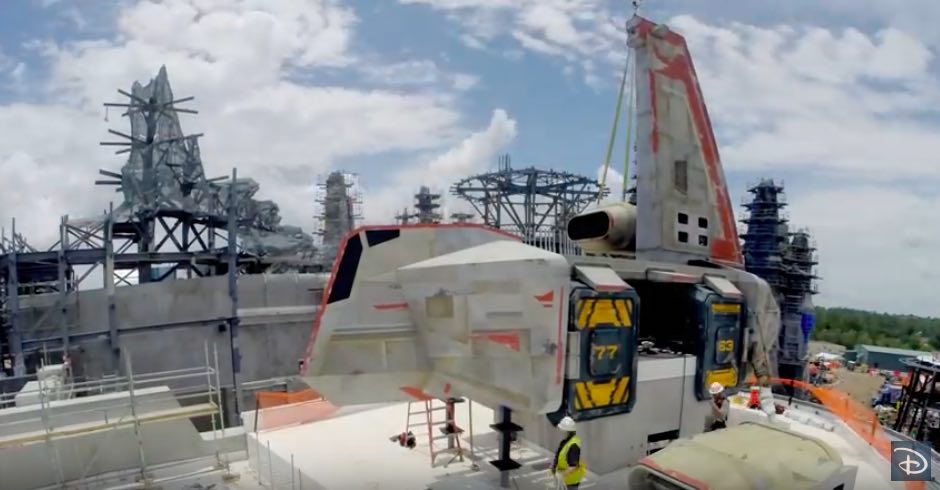 Disneyland could never handle 200,000 people at once. Zanetti expects Disney to use its upcharge MaxPass and free Fastpass systems to set up return times for the highly-anticipated new Star Wars land. This will allow visitors to ride and shop in Disneyland and Disney California Adventure while they wait to get into Galaxy’s Edge. Visitors who don’t get their hands on the limited supply of MaxPasses and FastPasses would likely wait in long overflow queues in Disneyland, Disney California Adventure or Downtown Disney, Zanetti said.

One for the (Star Wars) fans?

“I highly suspect that the first day of operations for Galaxy’s Edge will be a pay-for-play kind of deal,” said Zanetti, who worked for Disney parks in Florida for 10 years in attractions, merchandise, hotels and the D23 fan club. “I’d say you’re going to have to pay to visit Galaxy’s Edge if you want to be able to get in without waiting for hours and hours.”

“If you’re not a huge Star Wars or Disney fan, you’d be crazy to visit Disneyland if crowds are anything close to 150,000 people, let alone 200,000,” said Len Testa, president of Touring Plans. This is an online subscription service that lets users create custom theme park itineraries.

8  to 10 hour lines just to get in to Disneyland

Touring Plans anticipates 8 – to 10-hour lines just to get into Disneyland. It expects a MaxPass/FastPass system to be implemented for accessing the 14-acre Galaxy’s Edge. Once inside the immersive land, which Testa estimates can hold up to 13,000 people, visitors could encounter 6-hour waits for each of the E-Ticket attractions, Touring Plans forecasts. Avatar: Flight of Passage generated similar wait times when the attraction first opened at Disney’s Animal Kingdom in Florida. 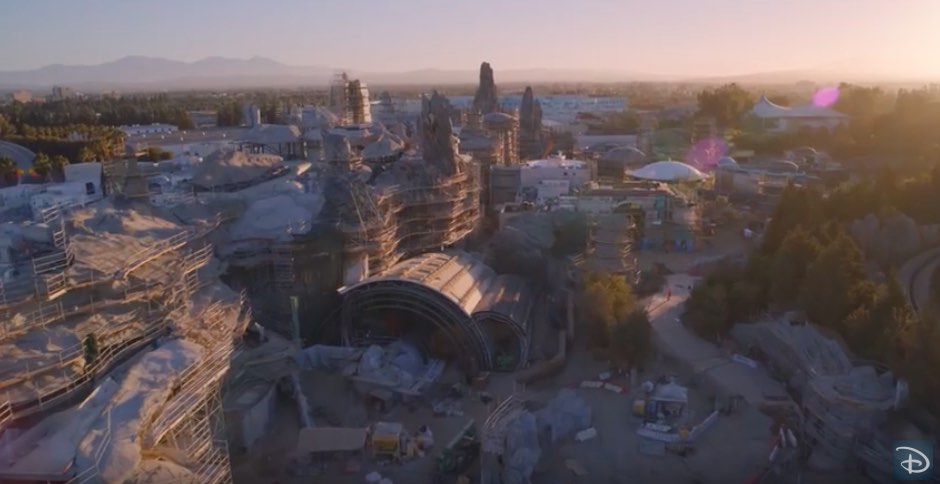 Disney CEO Bob Iger called the challenges of managing the intense interest in Star Wars: Galaxy’s Edge a “good problem to have” during a recent quarterly earnings report.

“We think it’s going to drive huge increase in demand. We also think we’re going to have some interesting challenges on our hands to manage that demand. But that’s a good problem to have,” Iger said.

Disneyland rarely discusses attendance numbers.  It declined to comment on the size of the crowds or wait times anticipated for opening day of Star Wars: Galaxy’s Edge.

Disneyland is world renowned for its crowd-control expertise. It has over 60 years of designing ride queues, corralling crowds for nighttime spectaculars and managing large attraction openings. Every crowd control detail is reviewed in advance by multiple divisions within the park.

The Anaheim park’s attention to detail is legendary. Disneyland crowd control management teams worked with Salt & Straw on the design of its queue prior to the Downtown Disney opening in October of the ice cream parlor. If Salt & Straw gets that kind of attention, you can rest assured park officials are developing a comprehensive crowd control plan for the grand opening of Galaxy’s Edge.

Disney parks around the world have dealt with massive grand openings in the past. Recent examples have been the 2017 debut of Pandora: The World of Avatar at Disney’s Animal Kingdom in Florida and the 2016 launch of Shanghai Disneyland in China. 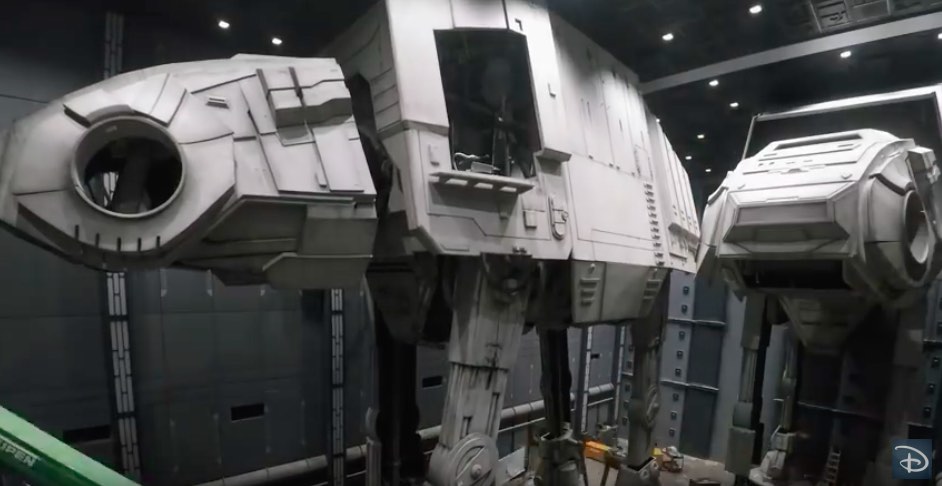 Disney’s rival Universal Studios had one of the largest grand openings in theme park history. This was the 2010 debut of the Wizarding World of Harry Potter at Islands of Adventure in Florida. This generated 10-hour lines just to get into the themed land on opening day.

Disneyland has periodically closed its gates to visitors on busy days. This has been the case particularly during the winter holidays between Christmas and New Year’s Day. Overflow crowds turned away from Disneyland are typically routed into Disney California Adventure. New Year’s Eve is often one of the most crowded days of the year at Disneyland. UCF’s Zanetti expects the attendance for the grand opening of Galaxy’s Edge at Disneyland to be double the size of the park’s largest New Year’s Eve crowds.

“Just knowing how popular it will be, I can not imagine that they won’t reach capacity on opening day. That would be really surprising to me.”

Zanetti also works as a theme park operational design consultant. He believes crowd management inside Disneyland may not be the biggest challenge on opening day of Galaxy’s Edge. 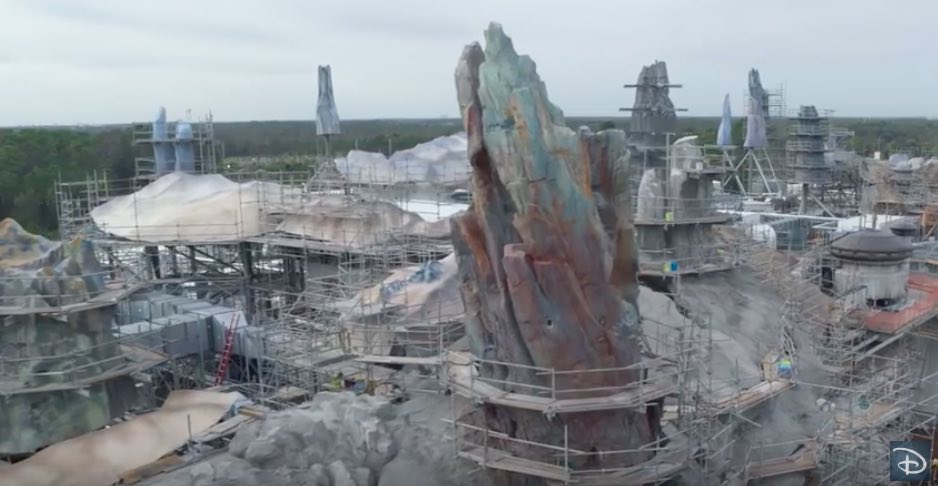 But parking is more of a problem

“I think parking is going to be more of the problem,” Zanetti said in a phone interview. “There might be gridlock in the resort district for I don’t know how long. Hopefully that new parking garage will be open in time.”

A new 6,500-space parking garage is under construction next to the 10,000-space Mickey and Friends parking structure. It may not be completed in time for the grand opening of Galaxy’s Edge.

During major Disneyland events, traffic has snaked through the Anaheim resort district. It has then   backed up onto the Santa Ana I-5 Freeway that runs beside the park. A traffic jam during a 24-hour event at Disneyland in 2015 forced the parking lots to close for over four hours.

Of course, merely attending opening day won’t be enough for some hard-core Star Wars fans. Exclusive previews for annual passholders and D23 fan club members could let diehards with money to burn into Galaxy’s Edge before its official debut. 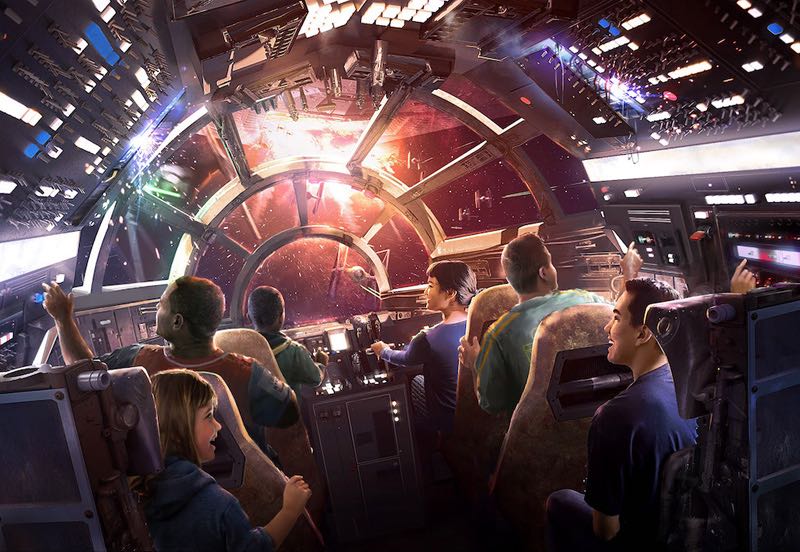 And for the hard-core Star Wars fans

Disney charged $299 per person for the Pixar Pier premiere in June at Disney California Adventure. This was for a reimagined land with a few rethemed rides. Galaxy’s Edge premiere tickets could reach $500 to $1,000, Testa predicts.

“Galaxy’s Edge is a whole other ballgame,” said Testa, in an email interview. He is a computer scientist who turned his master thesis into an online theme park planning tool.  He is also co-author of the Unofficial Guide to Disneyland.

That high anticipation for Star Wars: Galaxy’s Edge drives a feverish fear of missing out that feeds upon itself.

It’s going to be huge nonetheless, a 10 hour wait, just into the park, and that the line to the park is expected to be outside, leaving 200,000 guests burnt to a crisp and passing out from heatstroke.
Plus, the wait time just to get into Harry Potter land was 8 hours, which was still historically long for a theme park queue, yet it was almost 1 mile long.
This queue could be 3 pr even 5 miles long or more, and those 10 hours will do a number on everyone.
Aside from the likely sunburn, dehydration and heat exhaustion, we expect fussy people as they wait to enter the land.

Contrary to belief, lets hope Disney does their best to take care of the guests.
Guests can do their thing, but it takes responsibility to plan a good trip, and have fun.
Star Wars: Galaxy’s Edge is gonna be a record for Disney for sure, and more likely than not it’ll be worth the long and excruciating wait for everyone as Star Wars: Galaxy’s Edge blows their minds away.

P.S. I was also thinking based on it being extremely crowded, FP+ won’t do well for the guests, as it’ll be so crowded that guests likely will still have to wait many hours in line for it and the attractions even with them as the demand will be huge.

No worry………We went to Michael Jackson’s Captain EO Grand Opening and 24 hour round the clock Celebration….took turns waiting in line for hours ….TWICE ! Still have the free t-shirts too…………..

NO PAIN NO GAIN MAY THE FORCE BE WITH US !

Park capacity dictates the quality of the guest experience. There’s no getting around that. This wouldn’t make the shareholders or the fanatics happy but if Disney really cared about the quality of the guest experience they would use some kind of reservation system. No admittance to Galaxy’s Edge without an advance reservation… period for the first 6-12 months of opening. Also limit that to one per household/family. All the design and planning that goes into creating a great immersive experience doesn’t work if it’s “Let’s packem in like sardines”, business as usual.

@Brian Bugarin, Why do you think June 21st?

I seriously hope you are correct. We have a family vacation (with 6 children aged 2-15) that has been planned for more than a year for June 18-22nd. I DO NOT want to be there the first day/week that it’s open. We can change our dates around by a day or two, but not much more than that. Don’t get me wrong, we love Star Wars, & want to see Galaxy’s Edge sometime in the next 2 years, when most of the extreme hype has calmed a bit, but not right after/during its opening.

I hope you are right. We have a trip planned for June 18th -26th for my daughter High school graduation trip. We have been to Disney World multiple times and she wants to see Disneyland. I hope we beat the crowd.

I did the SMART thing and visited Disneyland Park this past Saturday (Feb. 2, 2019)
when the weather was AWFUL (it was a rather cold and windy day and it also rained
most of the time I was there) and BEFORE “Star Wars land” opens to the public!!! It
was so DEAD inside the park that I would be TOTALLY SHOCKED to find out that there
were more than 5,000 people there the ENTIRE day!!! I could have gone on EVERY ride
(except for a few that were either shut down for refurbishment or closed due to the bad
weather) if I had really wanted to, but I actually CHOSE to skip a few of them to “focus”
on the “major rides”!!! I literally WALKED ON almost every ride; the only rides that I had
to wait in any sort of line were for the “Indiana Jones ride” (10 minute wait), the “Buzz
Lightyear ride” (5 minute wait), the “Matterhorn ride” (5 minute wait for “Tomorrowland
side”; 3 minute wait for “Fantasyland side”), and the “Big Thunder ride” (5 minute wait)!!!
I doubt that ANYONE will ever have this kind of AWESOME day at Disneyland Park EVER
AGAIN (except for the weather, that is) once “Star Wars land” debuts!!!

Integrating media in art at the Museum of Fine Arts, Boston

Impressions from the IAAPA Attractions Expo 2018: the latest and greatest in the industry