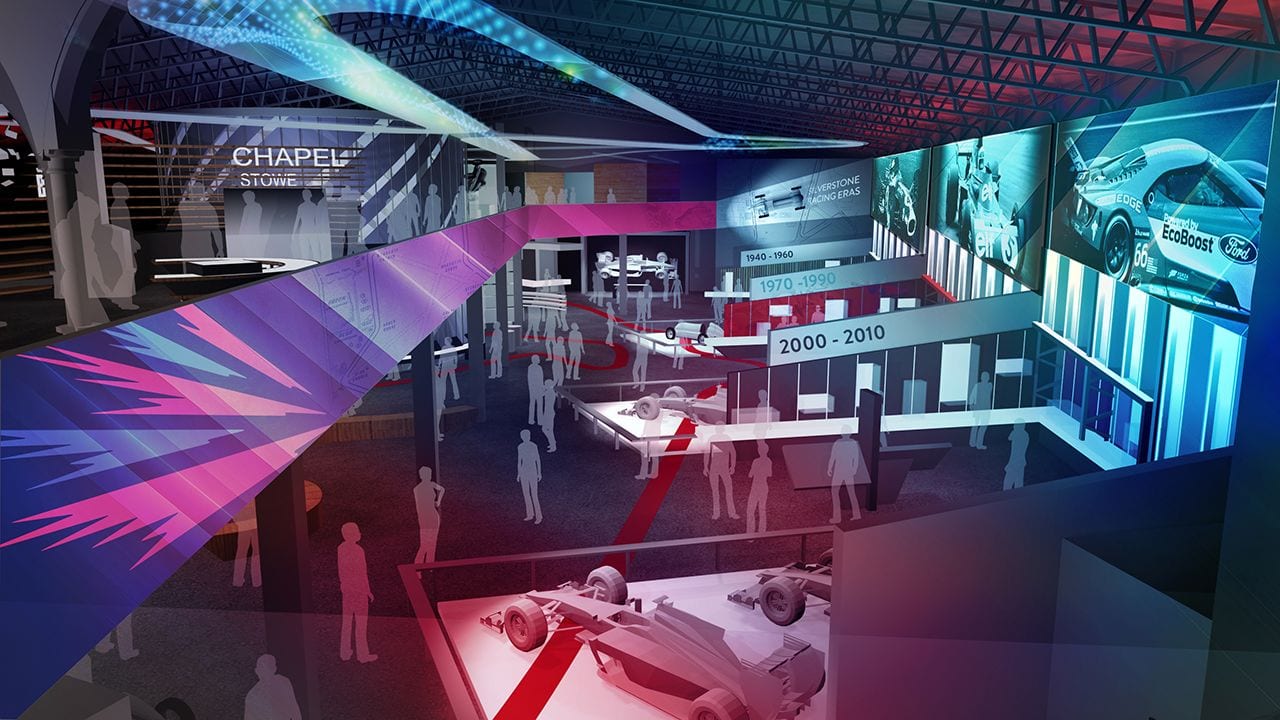 Silverstone, the ‘Home of British Motor Racing’, has hosted 52 Grands Prix. The first roared into life in 1948. It has been the exclusive home of the British Grand Prix every year since 1987.

Blooloop caught up with Sally Reynolds, CEO of Silverstone Heritage Ltd., to talk about Silverstone’s £9.1 million Heritage Lottery Fund bid, and the ambitious project it will fund.

The project vision is to bring the extensive heritage of Silverstone and British motor racing to life through the creation of a dynamic, interactive and educational visitor experience.

Reynolds, who took a degree in tourism studies, and a further diploma in marketing, describes herself as one of the few people who actually use their degree in their job.

The Silverstone heritage Experience, a Project Four Decades in the Making 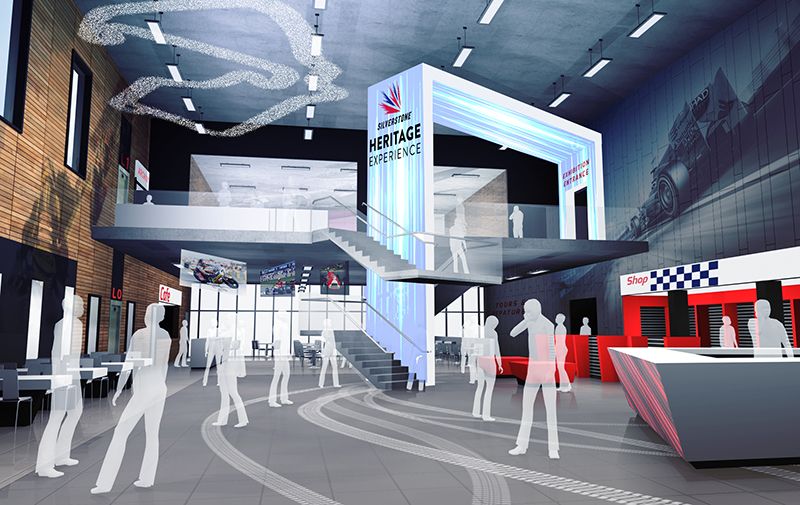 “I was taken on by Silverstone as a consultant, to look at how they could expand their offer, from being a seasonally focused race circuit, ” she says. “The British Racing Drivers’ Club (BRDC) have been considering opening a museum at Silverstone for over four decades.”

Silverstone is the only licensed Formula One Grand Prix circuit in the UK. Its archive contains records which date from 1928 when the BRDC was set up, to the present day. This includes all the race programs and the signing on sheets.

“For example, the 1991 signing on sheet would have names like Hill, Senna, Coulthard, ” says Reynolds. “We have put them on display at events, and the public was fascinated. But no one can see this stuff at the moment.” At present the archive building is housed in the dining room of the original farmhouse, out of reach of the general public.

“So the inspiration for the project comes from the need to bring history to life. We want to tell the story of all the legends who have raced at Silverstone and of all the people who have helped develop the circuit.”

Reynolds considered a number of possibilities when she approached the challenge of expanding Silverstone’s offer. “We could have added almost anything, ” she says. “You could put a rollercoaster into Silverstone, but one would never be enough, and more than that would not be viable financially. It became apparent, in the light of the fan base, the love of motorsport, the size of the following, that the perfect solution was to build a motorsport-based attraction that also protected the heritage of this site.” 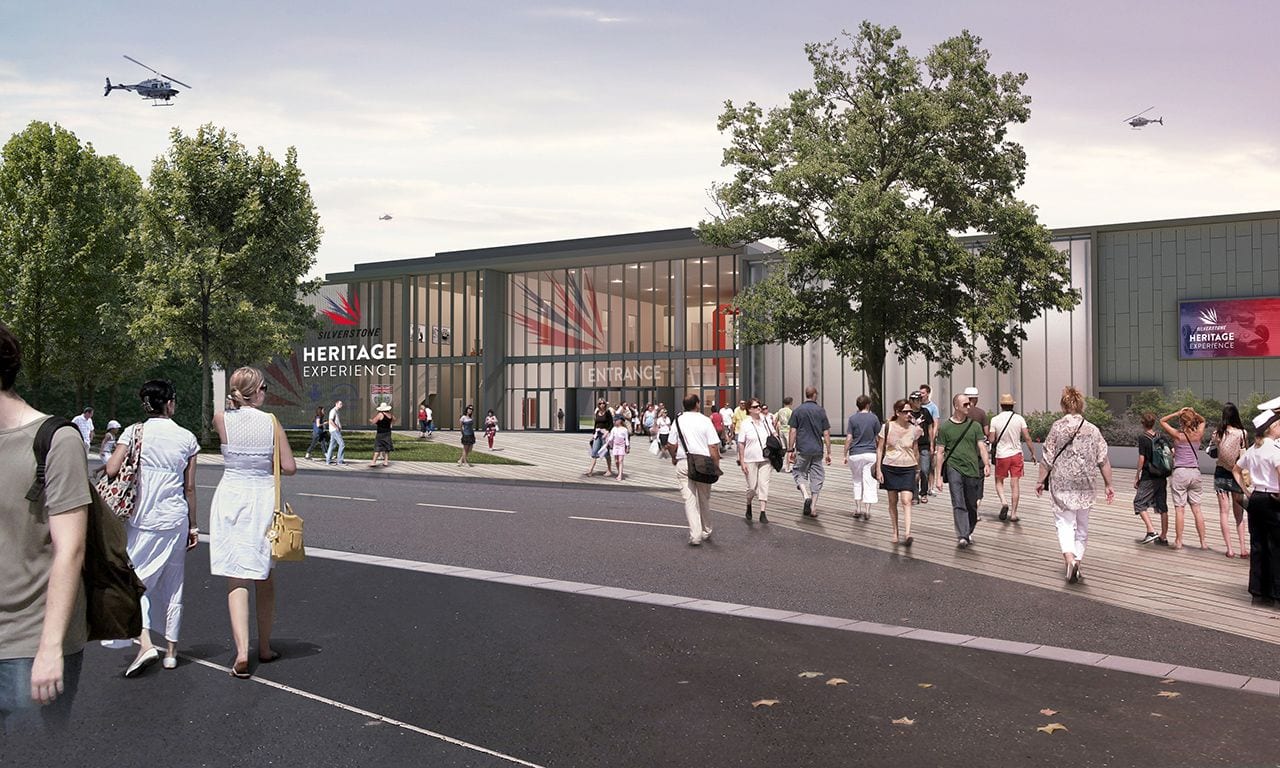 The team soon realised they could justify an application for Heritage Lottery funding. The application went in during the latter part of 2012 and the second round bid was made in August 2016. The HLF then scrutinised the project.

Heritage lottery fund applications are known for being gruelling. Nevertheless, Reynolds has only positive things to say. “It’s a brilliant process, because it tests your business case. It was a huge task but I think this is the great thing about the HLF. Projects that receive funding are viable, and you have a blueprint to follow to make the project happen.”

“Far More than a Museum”

The Silverstone Heritage Experience is far more than a museum. “There is not a good word in the English language that describes this project accurately, ” says Reynolds. “It is, of course, fulfilling the role of protecting and interpreting the heritage in the same way that a museum would. But it has to be dynamic and exciting to reflect the sport and the story it is telling. We’ve got to use the latest technology, because that’s what makes the sport so interesting.”

There will be a permanent exhibition at the entrance to the circuit. Designed by Mather & Co, it will take visitors on a thrilling two hour journey through the history of motor racing at Silverstone. It will highlight the roles played by the circuit, the British Racing Drivers’ Club, its owners, and the UK-based motor sport industry in its global development. The project architect heading up the building services team, is Jane Lock-Smith of Cube Design who was awarded Architect of the year at the Women in Construction Awards 2016.

Educating the Engineers of the Future 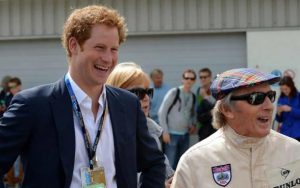 A forward-looking, dynamic education program is an intrinsic part of the project. This is one of the key reasons it won support from the HLF. “Prince Harry is our patron, ” says Reynolds. “He supports the project because he wants it to inspire future engineers. There will be a shortage of engineers in this country – there already is.”

Silverstone is a natural choice for investment in engineering education. It already has a reputation as a hub for high-performance engineering. There are around 4, 000 related businesses in the area, providing tens of thousands of jobs.

“High-performance engineering originally centred on Silverstone is a really successful part of the UK economy. However, we need to be able to carry on supplying great people to work in the industry.”

Reynolds points out that there are numerous programs that support engineering in tertiary education, at a graduate or postgraduate level. But we need to inspire potential students when they are a lot younger.

“We are trying to make the connection with children that if they work hard at maths, science, technology, then there are really exciting jobs that they can do. Not just the obvious ones, but ones that you wouldn’t know even existed.”

Students at Silverstone’s University Technical College (UTC) are involved with some of the interpretation within the technology area. Silverstone UTC, a centre of excellence for young people wanting to break into the specialist fields of High Performance Engineering and Business & Technical Events Management, opened in September 2013.

The Reach and Appeal of Motorsport Engineering

Silverstone will run summer schools for children: week-long STEM (Science, Technology, Engineering, Maths) packages, focused on motorsport. “They will use both the UTC and the Silverstone Heritage Experience to give them a rewarding week of project work and exciting case studies.”

Reynolds is keen to attract girls into the field. “There is research that identifies that unless you catch girls when they are relatively young, they won’t focus on the right subjects. There is still that lingering assumption that girls don’t do engineering. We want to make sure the role models are there to demonstrate that absolutely they can, and they do.” 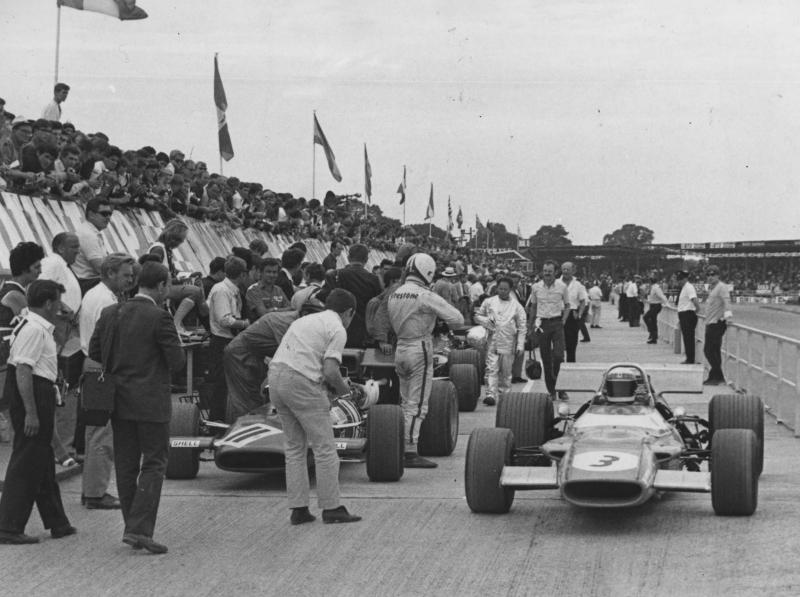 “Silverstone was a bomber training base in World War II, ” explains Reynolds. “There were 4, 000 aircrew. It was a training site so they had bombing simulators. Historically, there’s an interesting juxtaposition with today’s motor racing simulators.”

The very first races were held on the runways. The names Wellington Straight and Hangar Straight come from that heritage. The original air traffic control tower was used as race control for the first race in 1948.

All the corners and stretches of the circuit are named after location or historical markers. Stowe is named after the famous Stowe School. “The longest ride was the avenue of trees from Stowe House (now the school) towards Northampton, which originally went through the circuit. We’ve got the original oak trees on either side of the hangar building, where we are building the project.”

Some of the names reference historical markers that predate WWII by a long way. Luffield Abbey refers to the ruins of a Benedictine monastery, the remains of which were found adjacent to the corner in question. Becket’s Curve and Chapel Curve refer to the ruins of the Chapel of St Thomas a Becket, through which the cars now race.

“Until this project, there was nowhere on site that explained the reason for those names to visitors, ’ says Reynolds. 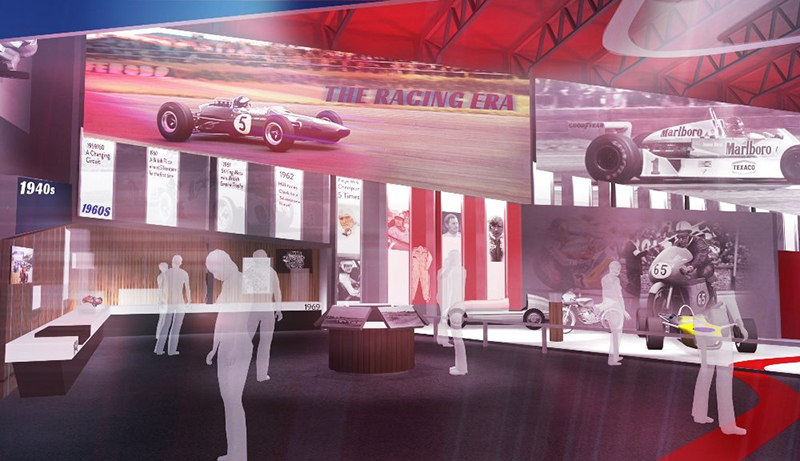 “We hope to create a broad appeal attraction, ” says Reynolds. “The HLF is keen for us to introduce a non-heritage audience to heritage through the appeal of motorsport.”

For the experience, Mather & Co will fully refurbish and re-clad the hangar, with a second new building to house the archives of the British Racing Drivers’ Club (BRDC), a specialist library and a learning space for school groups.

Visitors will be able to explore the historic site as part of a tour. “Obviously, people will want to stand on the hallowed circuit, and they can do that, thanks to a piece of retired circuit, ” says Reynolds. Visitors to The Silverstone Heritage Experience can either show themselves around informally or take a guided tour. “They will be able to go into the original pit, stand on the podium, and have a much more in-depth insight.” 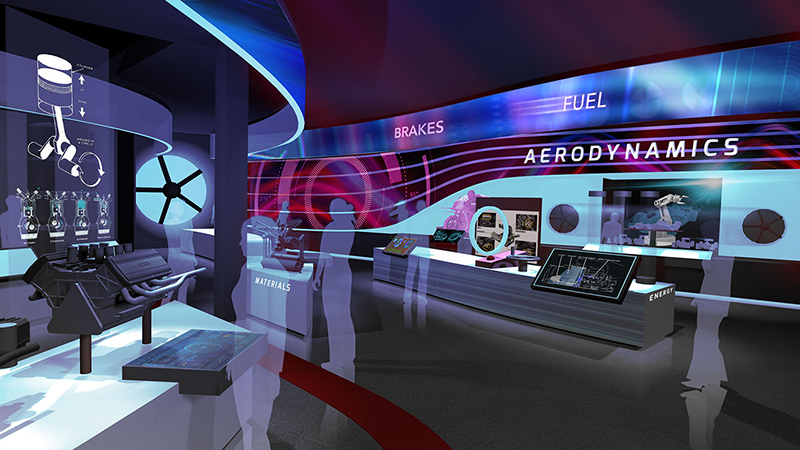 The Effective Use of Technology

VR will allow Silverstone Heritage visitors to experience the famous Silverstone circuit through the ages. “There will be three ‘garages’ set up. People take a seat, put on a headset, and start off in a Wellington bomber, flying above the circuit.”

After landing, they will take part in a race through the ages of the sport at Silverstone.

“They might start racing next to Stirling Moss, and then find themselves alongside Jackie Stewart, and then James Hunt. Then some of the modern day heroes as well, perhaps even going over the finish line with Lewis Hamilton.”

The experience will show a 360° view of the circuit. Participants will see some of the changes along with the famous corners. “It will be history, but with all the thrill and excitement. There will also be a film version, so some younger visitors or people with sensory issues, or who are affected by or dislike headsets, can nevertheless enjoy the experience.”

A High Visitor Footfall is Anticipated 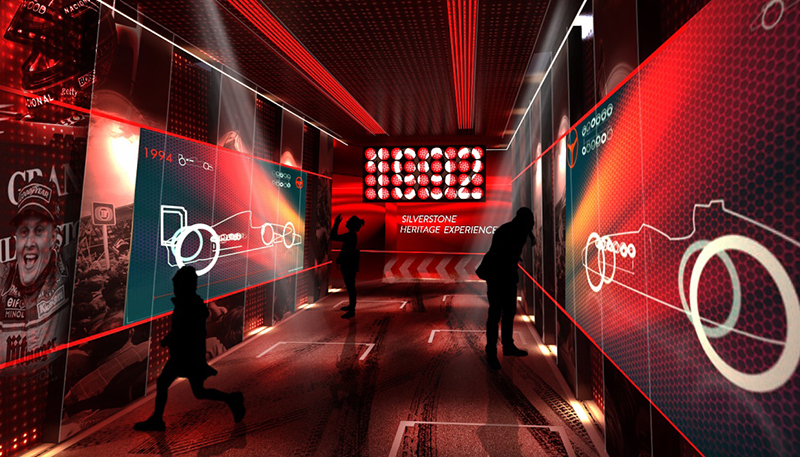 “We just have to get it all built and open now, ” says Reynolds. “Lots of challenges lie ahead. But Silverstone are experienced event operators. We have an experienced team of consultants working with us. With the additional support of the HLF, we are feeling very confident.”

The first full year of operation is scheduled for 2019. Projections predict a visitor footfall of 436, 500 in that year, rising to nearly 550, 000 visitors by the fifth year.

Of these it is anticipated that 73.6 percent will visit specifically to attend the Silverstone Heritage Experience. The rest will come primarily to attend a motor sport event, to take part in a driving experience or one of the many other activities. Silverstone already attracts over 900, 000 visitors each year.

“That is underwriting funding, so we are still looking for sponsorship, “ explains Reynolds. Her hopes are high. “It is a hugely charismatic and compelling project, which helps with the marketing, ” she says. Last year Formula 1 world champion Nico Rosberg said in a television interview that he hopes to visit the museum when it opens. Reynolds was delighted by the coverage. “I have never had a project make the main 6 o’clock News before – not in 20 years of working in marketing in the attractions industry! That just shows the compelling nature of the project.” 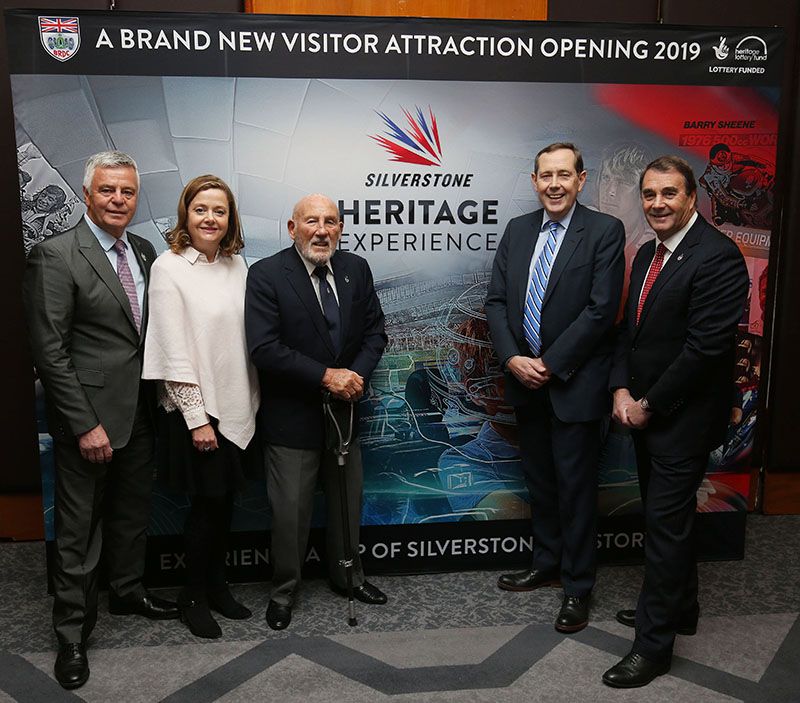 COVID-19 is still wreaking havoc on the attractions industry. However, the news this week has been dominated by the reopening of theme parks, museums, and zoos. This includes...