Consultant Gordon Linden AIA, AICP is a tireless champion for the transfer of knowledge from one mega-event to another...

Consultant Gordon Linden AIA, AICP (below left) is a tireless champion for the transfer of knowledge from one World’s Fair, Expo or other mega-event to another. When it comes to the Olympic Games, a great deal of progress has been made with the International Olympic Committee (IOC) requiring the compilation and distribution of certain reports and statistics. The practice was put in place around 1984, according to Linden, who consulted on Olympic events in Athens, Salt Lake City, Atlanta and Barcelona.

Linden, who is now a member of the Expert Panel for the city of Edmonton (Alberta, Canada) bid to host Expo 2017, pointed out that transfer of knowledge is especially difficult when it comes to world’s fairs. The entity that regulates international expos, the Paris-based International Bureau of Expositions (BIE) is a very small organization compared to the IOC. Moreover, expos are much more individually unique in the way they are conceived, planned and implemented than are the Olympic Games.

Transfer of knowledge is all-important to these gigantic, expensive undertakings because they are one-off events. A city or region gets one chance to do it right and the potential long-range benefits are huge.  Accurate documentation of an event provides material for future organizers to draw upon and the opportunity to bestow (and receive) credit where it is due.

Linden’s own recent contribution to the cause is The Expo Book (see: THE EXPO BOOK Reveals How to Plan, Organize, Promote, Host, Design and Operate a World’s Fair) an e-work in progress currently numbering six chapters, drawn from reports and articles he and fellow consultant Paul Creighton generated over years of advising expo organizers for bid studies and events in such cities as Toronto, Atlanta, San Francisco, San Antonio, Hong Kong, Budapest and Seville. Meeting for the first time recently with his new clients at Edmonton, Linden was gratified to observe that several people in the room had print-outs from The Expo Book “and were thumbing furiously through them.”

Being finite events that run only three to six months, world expos offer a limited window during which the full organization is in place to collect and compile information. “Transfer of knowledge matters most to the expos coming up, ” notes Linden. “The BIE doesn’t have resources to oversee it, and as the event draws to a close, the organizers have a diminishing motive to do a thorough job.” And because they don’t realize their full benefits and legacy until years after closing day, expos are vulnerable political targets for budget critics. This can lead to a certain amount of defensiveness when it comes to publishing numbers, at the same time pointing up how important it is for planners to have access to good information.

Because of the variation between events due to such factors as location, short-term and long-term goals, political climate and the economy, putting expo information into a general context and applying it from one situation to another is more of an art than a science. “It is difficult to put data points togeth

er, ” says Linden. “What you need is more a combination of anecdotes and statistics, in addition to some people on your team with real experience and intuition.”

Edmonton isn’t the only city in Canada aiming for the Expo 2017 slot. Calgary has similar ambitions and has made a past bid. To qualify for an expo bid on the international level, the city must first gain the backing of its province, and then make its case to the Canadian government. The one that receives the official nod on the Federal level will then be authorized to submit its bid to the BIE, which will consider it against other cities’ bids for the same slot.

The Edmonton bid is spearheaded by Edmonton mayor Stephen Mandel (right and since January there have been five fulltime staff dedicated to the project. The Edmondton city council has twice voted its support for the undertaking, both times unanimously. Vendors who have recently joined the team include Calder Bateman Communications, PriceWaterhouseCoopers LLC and Wakeham & Associates Marketing Inc.

See also:
World Expos: US Congress Favors USA Pavilion at Shanghai
Good prognosis for US pavilion at Shanghai 2010
Spain’s Expo Zaragoza 2008: A Guide to the Best Pavilions and Shows
Update on Zaragoza Expo 08
The Eye, the Dome, and the Expo: International Events and Attractions Abroad
As Nations around the Globe Pursue the Expo Dream, US Should Get Back in the Game 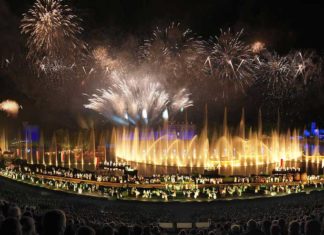