Leading AV specialist, Christie, has teamed up with Projection Artworks to create a spectacular projection mapping display that tells the story of iconic supersonic jet, Concorde.

Housed in a specially built hangar at Bristol Aerospace, the show uses the last Concorde ever built – Alpha Foxtrot – as a canvas. Four Christie D13WU-HS 1DLP laser projectors power the 12-minute journey into the history of the legendary jet that flew at twice the speed of sound.

The show explores everything from initial design and the technical intricacies of the engine, to the celebrities who flew in her. The audio track features commentary from engineers, pilots and stewards who worked aboard the iconic jet. 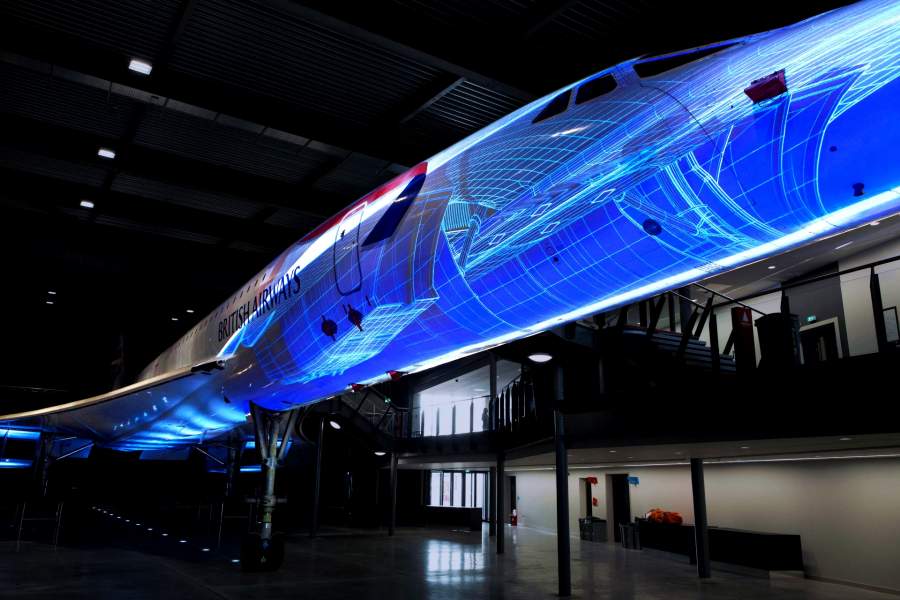 “Our aim was to capture the history and challenge of the project and the massive engineering undertaking involved,” comments Gavin MacArthur, Creative Director, Projection Artworks.

“From the pilots, engineers, and the people that built them, everyone (involved) has an emotional connection to this project. In this hangar, Concorde is the one standalone plane – it is the hero and our creative is the focus of that.”

In order to create an accurate model for the projection mapping, Projection Artworks used a laser scanner to take measurements at three million points on the aircraft. The team completed 50 scans and created a 3D model before combining all the points to form one three-dimensional point cloud, resulting in an accurate model.

“It wasn’t just technical, it was very moving,” continues MacArthur. “One thing that was apparent was a lot of people put a considerable amount of time into the Concorde project. It was a beautiful plane, you’ve got to do it justice and make sure the information is technically correct.”

Projection Artworks selected Christie projectors, having worked with them on previous projects.

“We knew they would provide the right balance in terms of chassis size with all the control capabilities we needed,” says Jackson Taylor, Head of Technology, Projection Artworks. The attraction has proved a hit with visitors, attracting 150,000 within the first ten months of opening and continues to earn five-star reviews.

“I was really proud of this project,” adds MacArthur. “When you work on it, you almost have these blinkers on; it’s hard to stand up and appreciate it. When we watched it through for the first time, we knew it was a job well done.”