Plans for a new underwater museum to preserve the shipwreck of The Amsterdam have been revealed by ZJA architects.

The Amsterdam, wrecked off the coast of Hastings, UK, is a time capsule of 18th century maritime history. It will be floated to Amsterdam where a museum constructed around it will allow visitors to watch the archaeological exploration in progress in the Docking the Amsterdam project.

The Amsterdam was wrecked in January 1749. As the ship became unsteerable, the captain beached the ship on the British shoreline, allowing everyone on board to reach shore safely. The ship was swallowed up by sand before any salvage operation could be undertaken and has remained there ever since. The large tidal range of the shoreline and its currents is eroding the wreck so a plan has been devised to bring the ship back to its home port of Amsterdam where it will be protected and investigated under water.

The 40-metre wreck will be gently lifted from the shifting seabed using a steel salvage dock. The water and some of the surrounding sand will stay with the ship in its protective basin as it is transported to Amsterdam. Once docked, an underwater museum and living research centre will be constructed around the wreck. 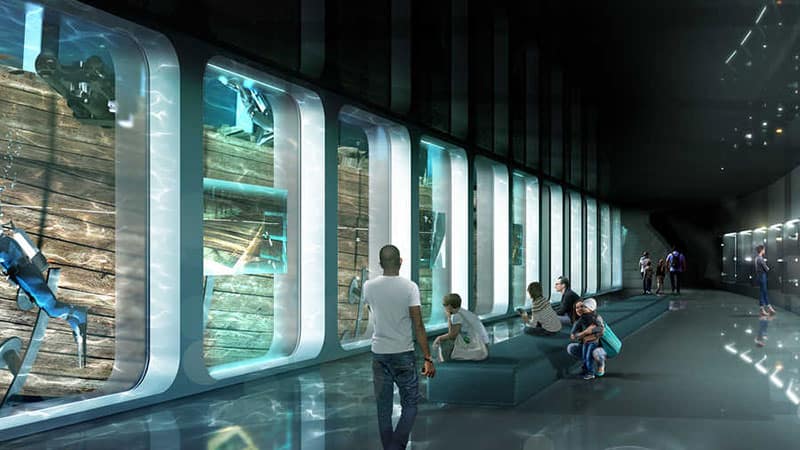 The walls will be lined with glass so visitors can see the wreck from various angles and watch diving archaeologists as they excavate the wreck. Exhibition spaces around the central core will display finds from the excavation. Research facilities and laboratories will also be created. Above water the museum will be encased in a curved canopy – what ZJA call a “protective blanket”, made from tensile fabrics. It will also include a walkway providing visitors aerial views of the ship.

“Visiting this venue is like entering a theatre that stages the investigation in progress and engages the public with the discoveries the divers and researchers do inside the wreck,” say ZJA. “Events will be organized that show the finds and results and put them into context.” The Amsterdam was built by the Dutch East India Company (VOC). It’s the best-preserved ship of the company and its excavation is likely to provide invaluable insights into Dutch maritime history. “The Amsterdam is a treasure chamber that shows us how financial resources, information and technology, cultures, politics and violence, trade and globalization, innovation and exploitation merge,” says ZJA. “All those themes concern us today, so you could say this is the most instructive and important heritage we have.”

Technology and cultural heritage will join to present a fresh history of Amsterdam and Dutch colonial past in general.

The project is a joint collaboration between ZJA, Amsterdam city archaeologist Jerzy Gawronski, consultants Deloitte, engineering firm Mammoet, and VEKA Shipyards. The project is likely to take several years with the museum slated to open in 2025. Indiana University has collaborated with the Dominican Republic’s government to create a ‘Living Museum in the Sea’ at La Caleta Underwater National Park.

Meanwhile Jordan has unveiled an underwater military museum off the coast of Aqaba. Military machines have been stationed along coral reefs for divers to explore.

Other undersea projects in the pipeline include Proteus, an underwater pressurised research station, set to become ‘the ocean’s equivalent to the International Space Station’ according to Swiss designer Yves Behar.  And Japanese engineering firm Shimizu Corporation claims its environmentally friendly Ocean Spiral underwater city could be a reality by 2030.