Squint/Opera, the creative digital studio and consultancy, has reissued its Flooded London series of speculative visualisations, showing the much of the city London underwater in 2090 due to climate change. Squint/Opera is pleased to announce that its Flooded London series, created in 2008 and reissued in 2019, is now on display at the Roca London Gallery as part of the Sea Change exhibition.

The exhibition, Sea Change: Flood Resilient Architecture for the 21st Century, has now been extended until 23 December 2020. It looks at how architecture is adapting to urban flooding as a result of climate change.

A recent report by the Royal Institute of Britsh Architects (RIBA) report shows that 1 in 6 UK homes are currently vulnerable to flooding. And that number is set to double by 2015. As flooding causes around £1.4 billion of damage to UK businesses and households each year, architects are looking at how design can help us to ‘live with water’.

Exhibition curator Eva Woode says “most architects are now aware of the fact that the construction industry is a huge contributor to CO2 emissions.

“However, we are still learning about how to adapt to this new reality – architects, developers, local authorities and communities will need to work together to make sure existing and new buildings and developments are resilient, as flooding will become the ‘new normal’.” Sea Change showcases projects – proposed and realised – by leading architects around the world in the field of flood resilient architecture. One solution on show is Marlies Rohmer Architects’ Floating Houses IJburg, completed in 2015. Located on a lake near Amsterdam, these houses have been highly successful and the original scheme has been expanded, with a total of 18,000 units now planned. 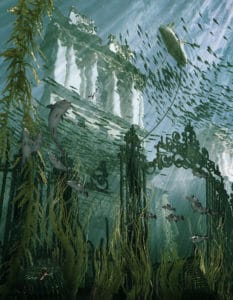 “From two smartly dressed women partaking in a spot of fishing on their lunch break at Canary Wharf, to a gentleman poised on a ledge inside the dome of St Paul’s Cathedral, about to dive into a lagoon below, these dreamlike images trigger the imagination, and bring a sense of optimism and possibility to the exhibition.”

“The general scenario is set 80 or so years into the future, long after the sea levels have risen,” Squint/Opera said when the images were originally created.

“The catastrophic side of the sea coming in has long since passed and the five images are snapshots of people going about their lives, having adapted to the world’s new circumstance. The scenes present London as a tranquil utopia with the architecture of the distant rat race suspended below the water. The people in each scene appear to be relaxed and happy in their environment.”

Earlier this year, the company also created immersive digital media for the new Power of Science exhibition at the Phillip and Patricia Frost Museum of Science in Miami.