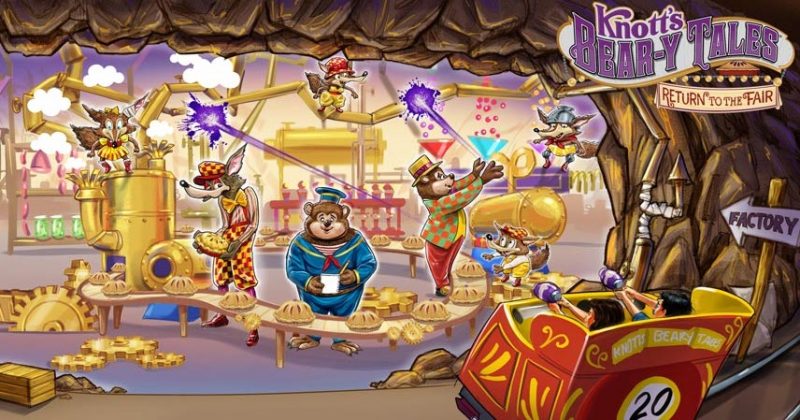 Opening in summer 2020, the ride is called ‘Knott’s Bear-y Tales: Return to the Fair’. It will take visitors on a journey through reimagined show scenes from the original dark ride.

These will include the Boysenberry Pie Factory, Frog Forest, Fortune Teller Camp, Thunder Cave, and Weird Woods. The ride will culminate in a celebration at the County Fair.

The story takes place 34 years after the first tale. It follows Boysen Bear and Girlsen Bear as they make their way to the County Fair to earn a prize for their famous boysenberry pies.

Sadly, Crafty Coyote has also returned with his mischievous pups – and they want to steal all the pies for themselves. (Don’t we all?)

“The return of Knott’s Bear-y Tales is perfect for the 100th anniversary because it brings back one of the park’s most nostalgic and beloved attractions in an innovative 4D dark ride format that will delight an entirely new generation of fans,” said Knott’s VP and general manager Jon Storbeck.

Visitors will board ride vehicles equipped with jelly blasters in a bid to recover the stolen pies, as they travel through whimsical environments and compete for the highest score.

For the anniversary, there will also be a summer-long celebration and tribute to the Knott family’s history, with festive park décor, themed F&B, unique entertainment, exclusive merchandise, and surprises.

The move would have united two of the largest theme park operators in the US, but Cedar Fair rebuffed the offer as ‘inadequate’.