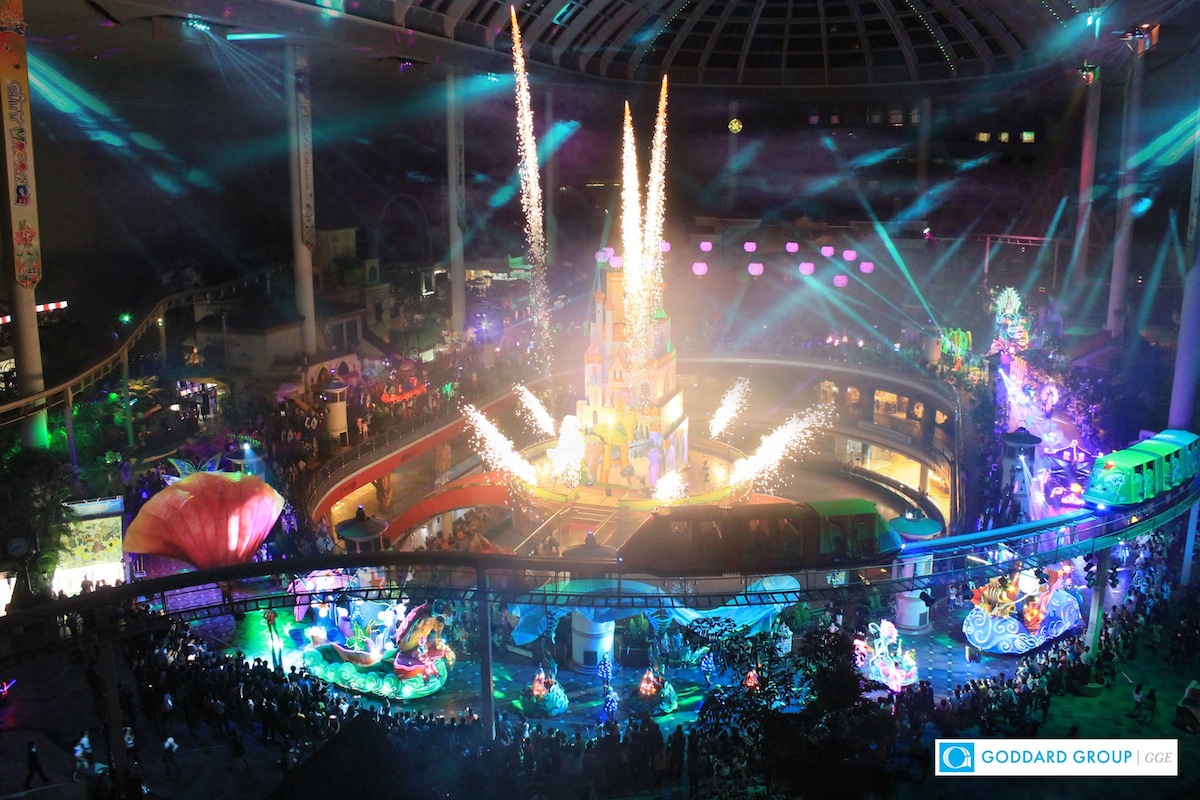 On June 3rd, the Themed Entertainment Association and AECOM released their annual report tracking the attendance of the world’s top-performing theme parks.

Notable among 2014’s significant gains was South Korea’s Lotte World, the 14th best-attended theme park in the world, having hosted over 7.6 million visitors, up 2.8% from the previous 12-month period.

According to park officials, the gains are a direct result of the popular new “Let’s Dream!” nighttime spectacular, which debuted midway through last year (July 1, 2014.)  The popular, end-of-day light parade, designed and produced by North Hollywood entertainment design firm The Goddard Group, is credited not only for triggering the bump in attendance, but more impressively for a 35% boost in visitor length-of-stay.

The Goddard Group will be exhibiting during the IAAPA Asian Attractions Expo in Hong Kong, June 16-19. Find them on booth #431!

“Both from a creative and business standpoint, we have been extremely happy with the results achieved by ‘Let’s Dream!’” says Gary Goddard, Founder and Chairman of the Goddard Group. “As soon as the show debuted last summer, the park saw massive increases in their ‘Voice of Guest’ satisfaction surveys, so the more recent news of the attendance spike is just icing on the cake.”

“Let’s Dream!”, the largest and most ambitious production in the park’s history, has been widely recognized throughout the industry as one of the best theme park parades ever created, and is particularly notable for its use of advanced technologies, including a holographic effect and the world’s largest fleet of choreographed flying objects. To create the unique production, the Goddard Group enlisted the help of several A-list collaborators, including world-renowned puppet designer Michael Curry, and former Cirque du Soleil chief composer Benoit Jutras.

“There is no other show in the world quite like this, ” said Taylor Jeffs, the project’s creator and Director of Design for the Goddard Group. “Lotte World’s unique configuration and indoor setting gave us the opportunity to combine the multimedia show and nighttime parade components into a single event. The end result is much more than a traditional parade – It’s a 21st Century transformative theatrical experience, ” he notes.

“Let’s Dream!, ” designed to serve as the centerpiece of the park’s 25 year anniversary celebration, replaced ECA2’s Galactic Odyssey production which debuted at the park in 2007. The parade is just one of eight Goddard Group attractions to debut at Lotte World during the last three years as part of a modernization effort first begun in October 2012.

This month’s attendance announcement comes atop a wave of positive momentum for the Seoul-based theme park. This is the second year in a row in which Lotte World has enjoyed healthy attendance gains, recently beating-out Everland for South Korea’s top theme park spot.

According to Mr. Goddard, “When people hear that the Goddard Group is involved in a project, it immediately conjures expectations of something groundbreaking and innovative. It takes a lot of trust from a partner like Lotte to back a bold vision like the one we had with ‘Let’s Dream!’ So we are, of course, thrilled to see their faith in us rewarded in cold hard numbers.”