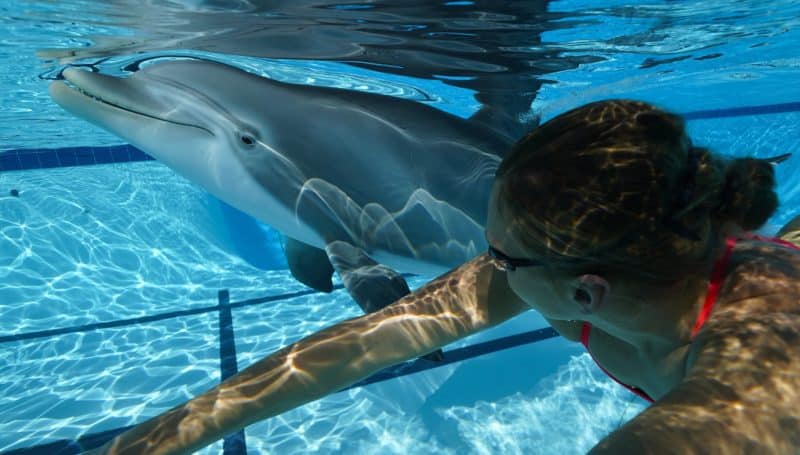 In response to the coronavirus crisis, China has implemented strict limitations on the import and export of wild animals.

Edge Innovations’ animatronic dolphin could replace the living creatures in tanks following the country’s extensive bans on the wildlife trade.

The realistic swimming dolphin was designed and built by special effects technicians from Edge Innovations, as well as Walt Conti and Roger Holzberg, former creative director and vice president at Walt Disney Imagineering.

The dolphin weighs 595 pounds, has a battery life of approximately 10 hours, and can survive in a saltwater environment for about 10 years.

It was designed to simulate the movements and appearance of an adolescent bottlenose dolphin. It features a realistic skeletal and muscle structure and accurate weight distribution.

However, the dolphin does not have cameras, sensors or intelligence to make it autonomous. Instead, it’s controlled by a nearby operator to respond in real-time to commands and interactions.

According to Gizmodo, the dolphin is being developed and tested for attractions at a new aquarium in China. Edge hopes to sell up to 150 robotic dolphins over the next three years (via Metro). “In terms of a 10-year business operating period and a two million annual visitor capacity, the overall investment and maintenance costs for a decent animatronics entertainment portfolio only accounts for about one quarter or no more than one-third of what a traditional aquarium spends,” Edge Innovation’s Li Wang told the South China Morning Post.

The idea was first tested more than 20 years ago at The Seas with Nemo & Friends (formerly The Living Seas) at Walt Disney World’s Epcot.

The robotic dolphin, known as the Dolphin Robotic Unit (DRU), could swim around the tank and interact with real divers. It was then used as part of an interactive experience at Castaway Cay.

Robotic dolphins and other creatures may be a solution for aquariums and theme parks that feature captive whales and dolphins, as they face growing pressure from companies including Qantas, British Airways Holidays and Virgin Holidays.