Severn Lamb, a leader in the manufacture and supply of leisure, resort and amusement transport, has revealed the final look and design of Southend Pier’s new trains.

Severn Lamb is pleased that the final design of the new trains has been announced by Southend Borough Council after considering public feedback on the initial rendering, revealed earlier this year. In January, the council showed the potential designs on social media and through a display at the entrance to the pier itself. Following this, the council had 3466 comments come in through its Facebook and Twitter accounts and a further 505 people gave their feedback on the display at the pier. The majority of responders (46%) preferred the modern nose cone, with 25% liking the heritage nose cone. This was followed by 17% of people choosing the ultra-modern nose cone and 12% preferring the tendered version.

When it came to the colour scheme, 49% of people preferred the green and cream livery, 31% chose the blue and silver livery, and 20% liked the dark contrast.

As a result, the new pier trains will be designed with a modern nose and a heritage green and cream livery. The new environmentally-friendly trains will arrive in summer 2021, replacing the current trains that have been running since 1986.

The new trains will also feature a cutting-edge audio-visual experience. Other key features include:

Cllr Kevin Robinson, the cabinet member for business, culture and tourism, says: “There was an incredible response to our call-out for views earlier this year, with nearly 3,500 comments made. A heritage green and cream livery and the modern nose cone proved the favourite and were therefore selected.

“I am delighted that we are now taking this forward this design into production and cannot wait to see these new trains gracing the Pier in 2021. I hope they will instil a sense of pride and joy in local people and visitors too.

“Southend-on-Sea is the longest pleasure pier in the world and one of the last to still include a railway, so it is great that the heritage and history of our beloved pier will be reflected in the new designs.”

The company enjoyed a successful year of sales in Europe and North America for 2019 and announced three new UK commissions to finish off the year, with projects at Colchester Zoo, Marwell Zoo and the National Railway Museum. 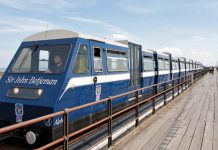