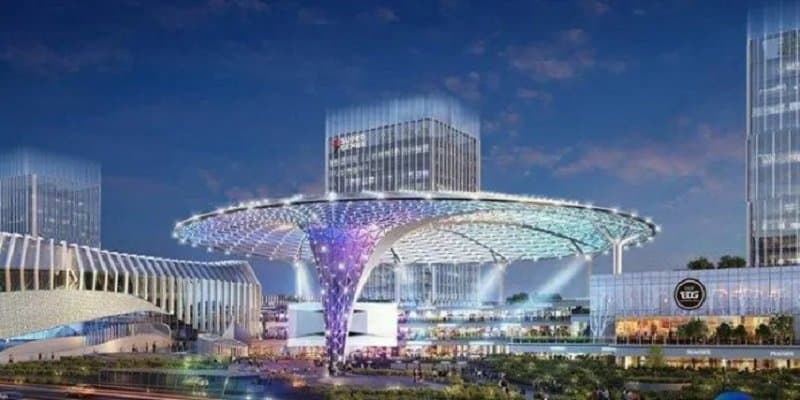 The centre of the new hub will feature a 6,000 seat arena which will host around 300 competitive matches per year. It hopes to attract around 10,000 visitors per day.

In line with the growing trend to offer a 365 degree offering around esports, plans also include a five star esports-themed hotel, an indoor skydiving venue and a breakdancing facility. Other amenities and attractions are yet to be announced.

The project, located on a 50 hectare site in the Minhang District, will also feature the corporate HQ for Edward Gaming (EDG), a subsidiary of SuperGen.

The first phase of the project, set to cost $770 million, is expected to be completed by 2023.

The ever-increasing interest in esports is primarily driven by its online accessibility, particularly during the last year when frequent lockdowns caused an explosion in gaming. However, just as with traditional sports, there is desire to attend a physical venue. “People want to be together,” says Brian Mirakian of Populous, speaking to Blooloop. “It’s in their DNA. People want to experience a sporting event together with their friends, with their families. There is no substitute for being at a physical venue, watching a game on Sunday afternoon with 70,000 people. With esports, we feel these live events are a cultural moment.”

The SuperGen announcement builds on Shanghai’s growing reputation as an esports hub.

The 2020 League of Legends World Championship was held in Shanghai last year although changes were made to the initial plans because of COVID restrictions. Riot Games had intended to hold the finals across China but all games were played in Shanghai. The venue was changed too, from Shanghai Stadium to the freshly-constructed Pudong Soccer Stadium. The Championship will return to China for 2021.

While the US and China lead the global market in esports, interest is increasing in other countries. Japan is another noteworthy market, forecast to grow at 16.9 percent. e-ZONe Denno Kukan, an esports-themed hotel in Nipponbashi, Osaka, opened last year.

Denno kukan literally translates as “electric mind space”, the Japanese term for cyberspace. The first three floors of the nine-storey hotel are dedicated to gaming, with the rest of the hotel given over to sleeping cabins.

Esports as a spectator event is still in its infancy. It remains to be seen what the right mix of entertainment and venue design will work best.

Brian Mirakian sites T-Mobile in Las Vegas and the Sun Trust ballpark in Atlanta which incorporate esports as part of a broad scale entertainment complex. “We think this approach is going to be central to the next generation of esports venues,” he says. “A 365 degree critical mass can be created around esports.

People can experience everything. From access to food and beverage experiences, to all sorts of peripheral entertainment. This may include drone racing, a condo or a hotel and elite training facilities. There will also be small gaming labs and places for developers to prototype next-generation games. In addition, there will be Plaza experiences for outdoor types of event and everything related to esports and gaming. Wider entertainment programming will happen where that critical mass around esports drives a much broader monetisation strategy. Ultimately it is just great for fans.”

Glytch recently announced plans to build esports LBE venues across North America. Founder Michael Williams says a fundamental lesson is that the esports lounges are not profitable on their own. The focus is going to be on creating a multi-purpose entertainment hub which incorporates other attractions and good quality F&B.