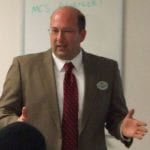 Six Flags Senior Vice President of US Park Operations Tom Iven said: “John’s vision and leadership coupled with his in-depth knowledge of the property and its veteran management team make him perfectly suited to take Six Flags Great Adventure to the next level.”

He said: “I am thrilled to rejoin this world-class park, the largest in our portfolio, and the second largest in the world. Being at Great Adventure is a homecoming and I am eager to work toward a bright future with this experienced and passionate team.”

A graduate of the University of Houston, Winkler has been with Six Flags for more than 30 years starting out as a front-line team member at Six Flags Astroworld in 1983. In 1998, he joined Six Flags Great America in Chicago as Games Manager before starting his first stint at the New Jersey park in 2001.