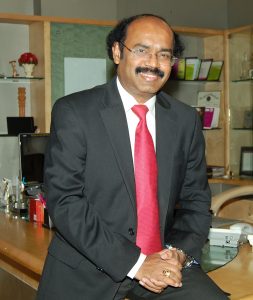 Ravidas explains why he chose to branch out into the aquarium business. He says: “We have a theme park which includes a water park, and about four years ago we went into snow parks. The customers kept asking what attraction would come next.

See also: Dr Jenny Gray on her time as President of the World Association of Zoos and Aquariums (WAZA) / Pacific Visions at California’s Aquarium of the Pacific

“When I was travelling to various countries, I was awestruck by the aquariums. I thought: Why not bring this experience to Indian visitors? So that’s how the idea first came about.”

VGP has been an innovator from the beginning. The company introduced the hire purchase system to India in the 60s. It also introduced an easy payment scheme for house sites in the 70s. In addition to this, it brought Indian movies and video to the world market in video format.

VGP then went on to bring the first beach resort to Chennai.

The tunnel aquarium continues this groundbreaking tradition.  It adds to the VGP portfolio of amusement, water and snow parks. 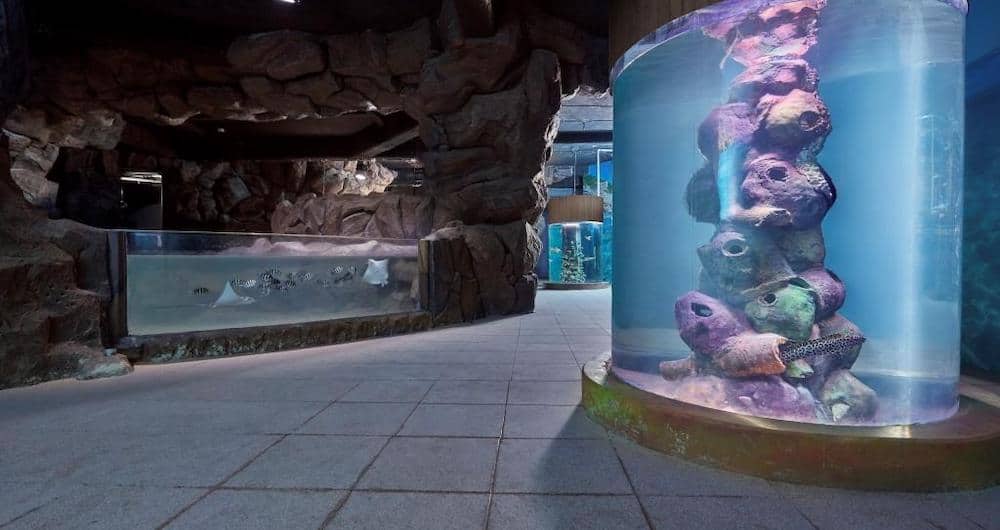 This is India’s first major aquarium. Because of this, there is, Ravidas says, significant interest from a new audience. These visitors would previously have travelled to other countries to visit a major aquarium. For example, Singapore, Malaysia and Thailand.

“There has been a positive response, and a tremendous level of interest from a sizeable market,” says Ravidas.

It was the size of the potential market that made Ravidas decide on a large format aquarium. Most people are familiar with attractions with standalone tanks. Ravidas says that VGP Marine Kingdom is a different experience.

“This is a tunnel aquarium,” says Ravidas. “It has a 70-metre acrylic tunnel. This immerses visitors in the underwater world and is the facility’s main attraction. It is also home to an additional 35 acrylic display tanks, some of which are cylindrical.

“It is an immersive experience for visitors, and, judging by the aquariums we have seen, is a popular format. For India, it’s unique.”

A statement tunnel and concept zones

“The length of the tunnel plays a vital role for a good aquarium experience, says Ravidas. “It should neither be too short or long and, in the end, we installed a 70-metre tunnel.

“The execution was done by Polin Aquariums, from Turkey. They have good expertise as they have erected many Aquariums in the world. The IAAPA expos opened the way for VGP to connect with Polin Aquariums. The company was also keen to move into India. So, it worked out well. The Polin team did excellent work in establishing specialist equipment and panels.”

Polin Aquariums is a subsidiary of the well-known Turkish Polin Waterparks. VGP Marine Kingdom engaged it to provide life support systems and water management. It also worked on the insulation and acrylic panels for the tunnel aquarium.

The aquarium features five concept zones with a mix of fresh and saltwater. The zones include rainforest, gorge, mangrove, coastal and deep ocean sections. These reflect the creatures’ natural habitats. 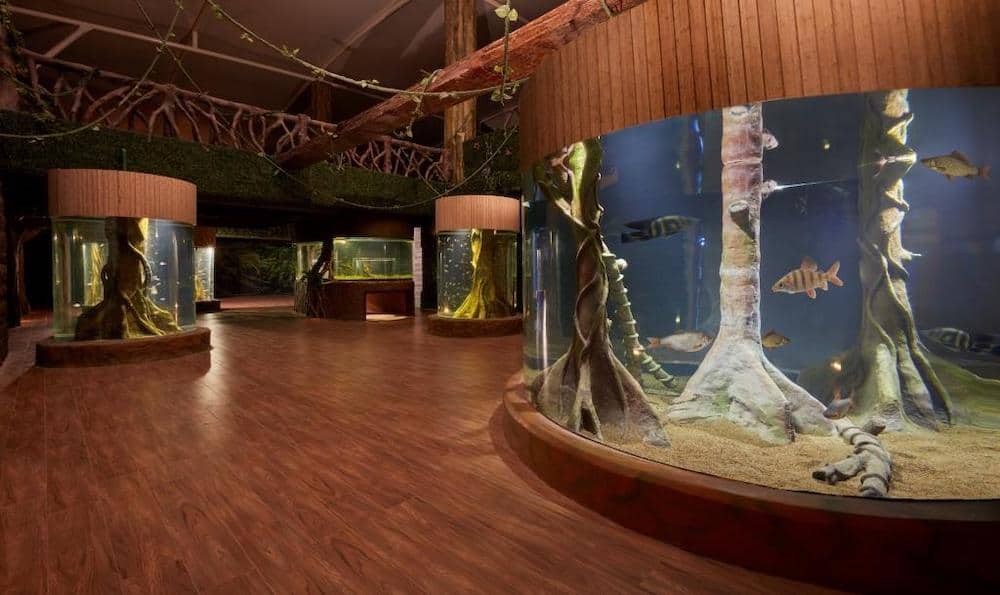 A wide range of species

The freshwater fish are from mainland India. The marine fish – which include sharks, rays and a whole multitude of species – are from the Indian Ocean.

“We have many species there in the marine zones, says Ravidas. They are all from the neighbouring regions. For example, the oceans of Indonesia and Malaysia, in the Indian Ocean.

The aquarium has recruited experienced professional curators and aquarists. They are responsible for maintaining the exhibits and take care of the fish. 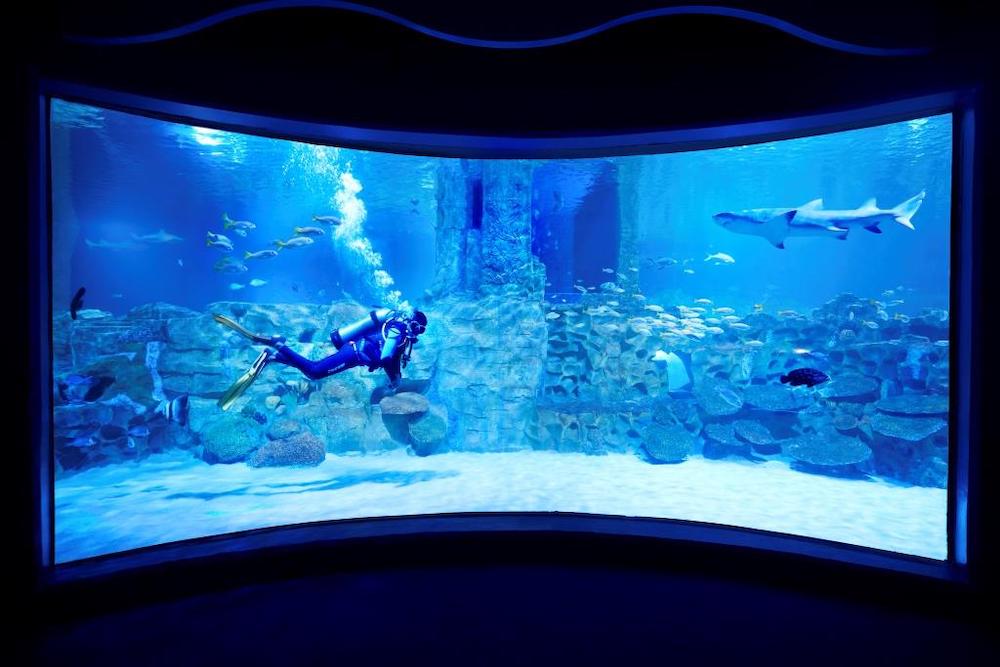 Ravidas plans to look into participating in conservation initiatives. He intends to make conservation a priority in the future. He says, “We only started a few months back, so are still testing and fine-tuning certain aspects here and there. For the moment, our focus is on education.”

The aquarium will feature teaching labs. It will also have a classroom, set up for groups of visiting schoolchildren.

“We have put in a great deal of hard work,” says Ravidas. “We travelled widely to around 25 aquariums around the world to see how they function and we looked at how they are put together before the project began. This meant that the planning team could work from a range of interesting ideas.” 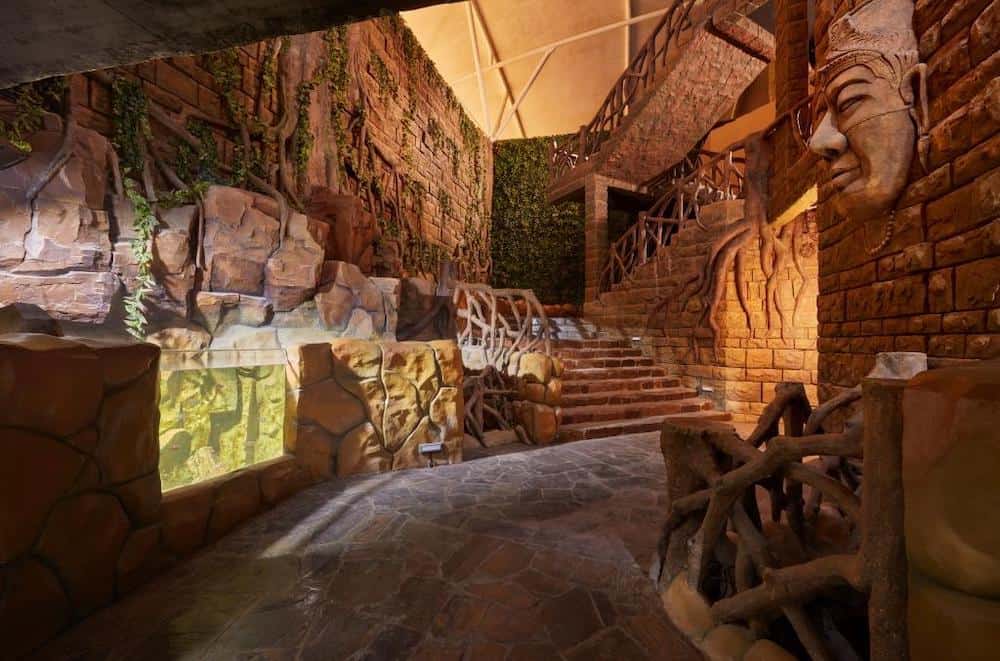 “India is a big country,” he continues. “We have a large domestic population that has never seen a good aquarium. We are aiming for people to come from the Northern part of India, as well as the East and West. They would otherwise have to travel to other countries, which would be more expensive. So, the aquarium is going to be targeted towards domestic tourists.

“Then the next thing, of course, is the school children. We have sent out mail to most of the five thousand schools in the region; they all responded well. They do excursions every year, so I’m sure this year they will be coming to the aquarium.

“These are the two segments we are targeting as of now.” 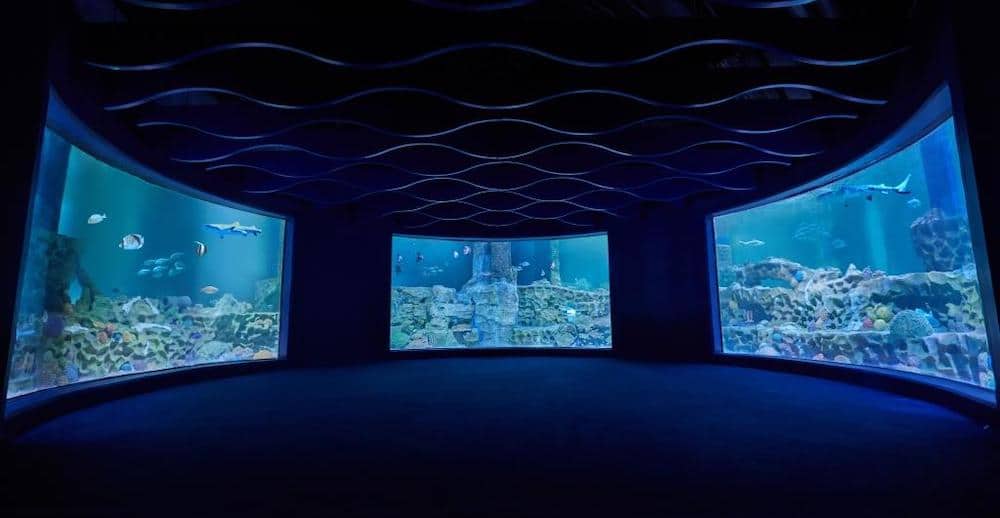 Off to a strong start

The first months since the aquarium opened have been very promising. Locally, the school holidays start in the second week of April and go on until June. The aquarium enjoyed a large number of holiday-makers during this period.

Contextualising the Indian tourist attractions market, Ravidas says, “We have more than 350 IAAPI attraction industry members in the attraction industry. Most of them are theme parks and water parks, spread all over the country between the North, East, and South. It is a growing market. But it is relatively recent and un-matured when compared with, for instance, the US and Europe. 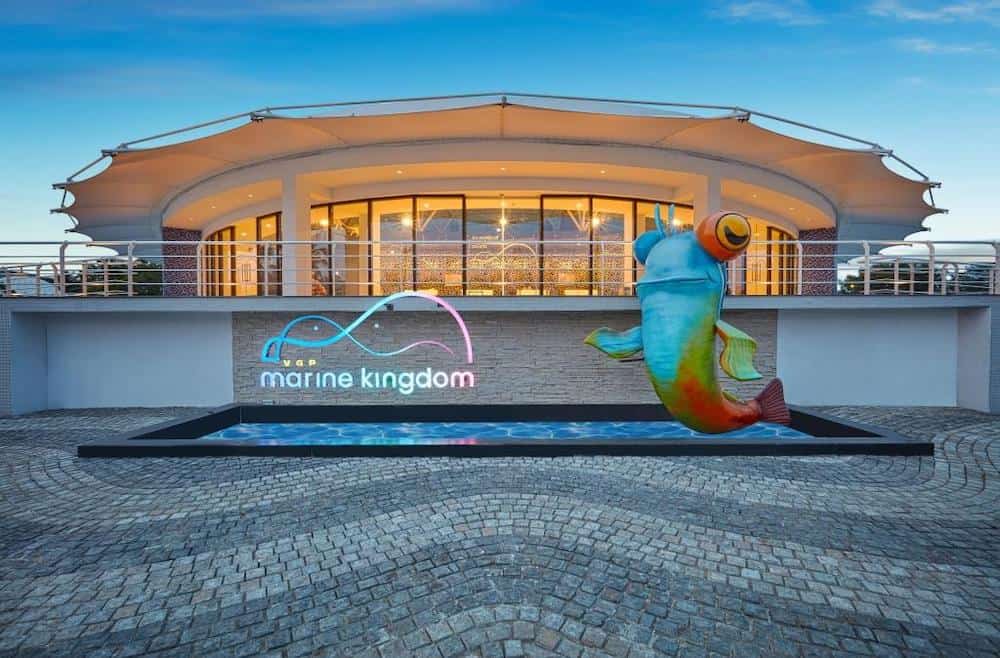 “It all started in around the 1990s, so has only been going for less than 20 years. There are now many attractions that have recently come in, of large size and international quality. For example, Imagica Theme Park in Mumbai.

“The market is definitely growing, in terms particularly of domestic tourists. Chennai is on the Ocean-side of the Southern Peninsula. In our region, we have 30 theme and water parks. Now, an increasing number of new attractions like the snow parks are appearing.

“The market is really growing. I don’t see big players like Six flags, Disney stepping in now. I think there may be many factors contributing to that.”

One barrier is likely to be the prohibitive levels of import tax. India has a 37% tax or customs duty on import products. Ravidas says, “GST [Goods and Services Tax] is down to 18% after we fought to bring it down.  We’re still fighting to reduce it further. If we can bring it right down, it will be good for the industry.” 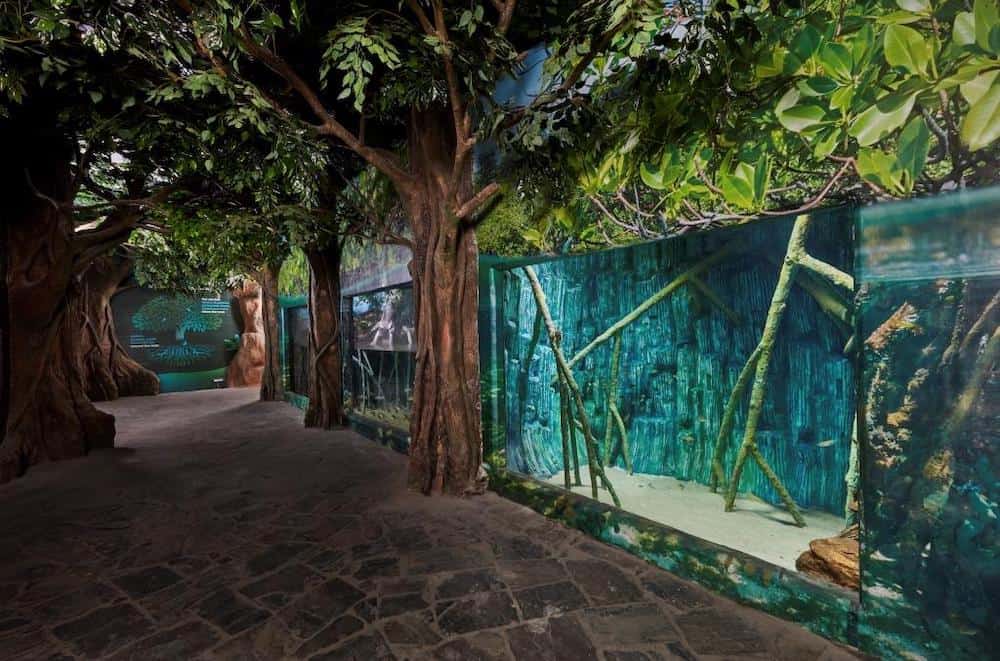 Polin Aquariums is part of the Polin Group. This world-leading one-stop amusement park supplier designs and builds public aquariums. It takes them from initial concept and architecture to construction and business plan. Polin also handles the procurement of living creatures and the development of brand identity. It comprises an in-house team of architects, engineers, biologists, veterinarians and technical experts.

“As Polin, we contributed the main tank acrylic panel installations and LSS design,” says Güzin. “We also supervised mechanics in terms of LSS pipelines, filtration systems commissioning. And finally, we were responsible for the water testing of the main tank.”

The company produces 100% domestically-made products in Turkey’s Kocaeli province. It has the highest production capacity among water slide producers in the global market. Polin built the life support systems and acrylic panels for the tunnel aquarium. 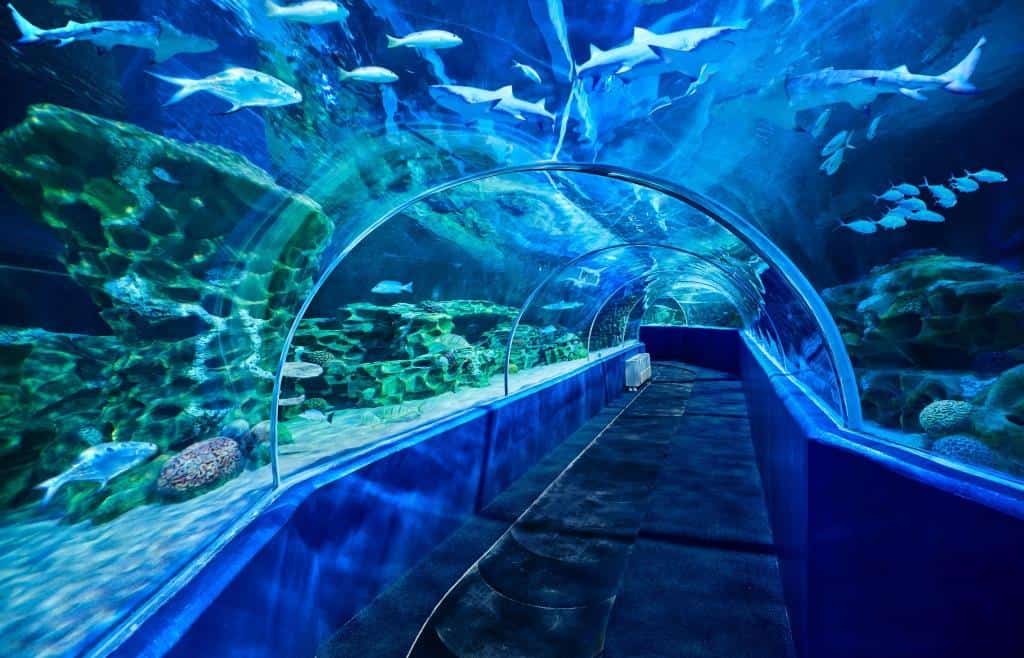 The future of VGP Marine Kingdom

Ravidas will work towards establishing a second aquarium if there is interest from other parts of the country. Meanwhile, the second phase of the current aquarium’s development will go ahead. This involves bringing in mammals such as dolphins over the next few years.

VGP Marine Kingdom anticipates a footfall of at least one million people in the first year.