National Enquirer Live will tell the story of the sensational tabloid. It was the first on the scene, with the first news helicopter in the sky, and the first to be stocked in the supermarket.

It will now be the first tabloid to have an immersive museum attraction, bringing its most famous and controversial stories to life.

Visitors of all ages will explore new National Enquirer exclusives, learn about the JFK conspiracy, get the scoop on the British Royal Family, and look at the biggest crimes of the past century, as well as the lives of Hollywood celebrities.

In Pigeon Forge, the 20,000 square-foot National Enquirer Live will be located at 2115 Parkway, in the Pigeon Forge Attraction District. 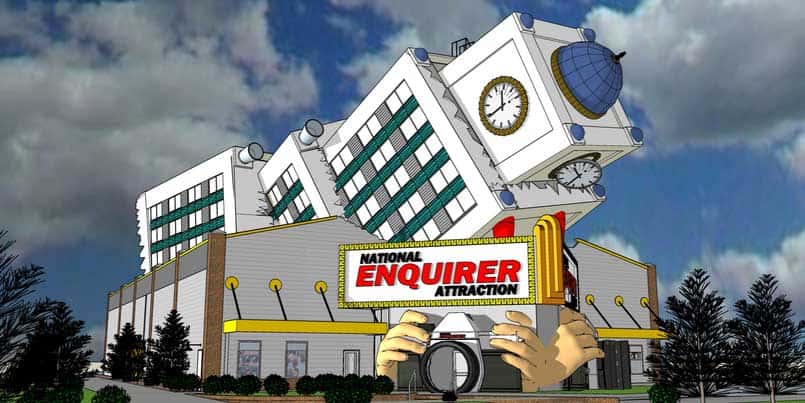 According to FrontPage Attractions, the company behind National Enquirer Live, the new destinations represent a $25 million combined investment in Pigeon Forge and Branson and will create more than 100 new jobs – 50 at each location.

“While print publications across the country are downsizing, the National Enquirer brand is as strong as ever,” said Robin Turner, a partner in FrontPage Attractions.

“People have shown that for nearly 100 years, they just can’t get enough of the storytelling in the National Enquirer – they know what their readers want – and we’re excited to take those stories off the page and bring them to life.”

Turner added: “National Enquirer Live in Pigeon Forge will open this May and the Branson location will open shortly after.”

FrontPage Attractions is currently looking at other potential attractions and expansions based on the National Enquirer Live model.

“It is entirely conceivable that other major media outlets could be brought to life in a similar manner,” explained Turner. “We would welcome these discussions as we continue to expand our Entertainment company.”

Amid the trend for brands to create experiences, Tyra Banks recently announced Modelland – an experiential attraction where visitors can enter the world of modelling with interactive entertainment and curated retail.

The attraction is set to open in late 2019 at Macerich’s Santa Monica Place.

Tyra Banks, famous for creating the America’s Next Top Model franchise, hopes to create a “grand, fantastical, physical place” that will “redefine what a model really is,” according to a statement.