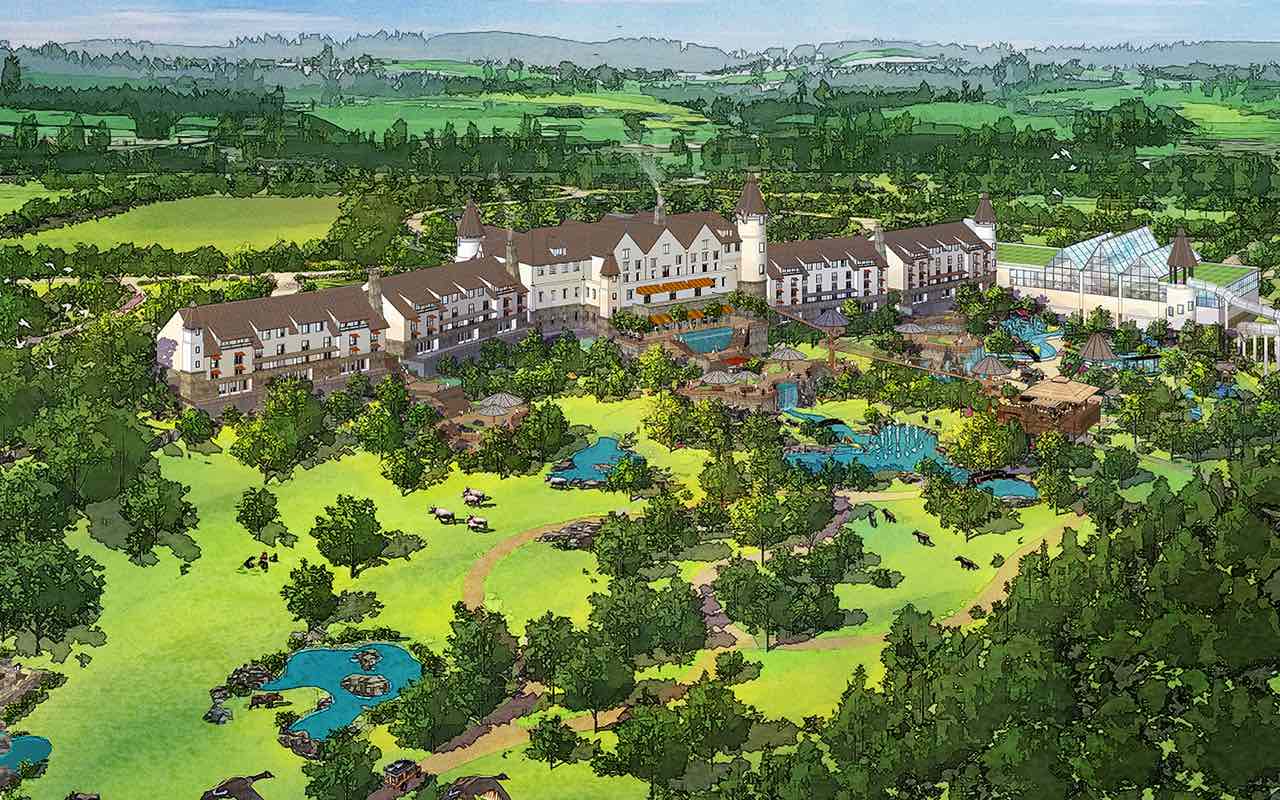 In its 51st year as a tourist attraction, Longleat, the UK’s no.1 safari park is looking to the next half century as it pushes ahead with plans for a hotel and waterpark expansion. We talk to CEO Bob Montgomery.

Though the safari park is at the heart of the visitor offering at this stately home on the Wiltshire/Somerset border, Longleat is an idiosyncratic beast of an attraction. Visitors can explore five centuries of history in the majestic home and gardens occupied by the 7th Marquess of Bath. They can enjoy exhibitions of treasures and family heirlooms. 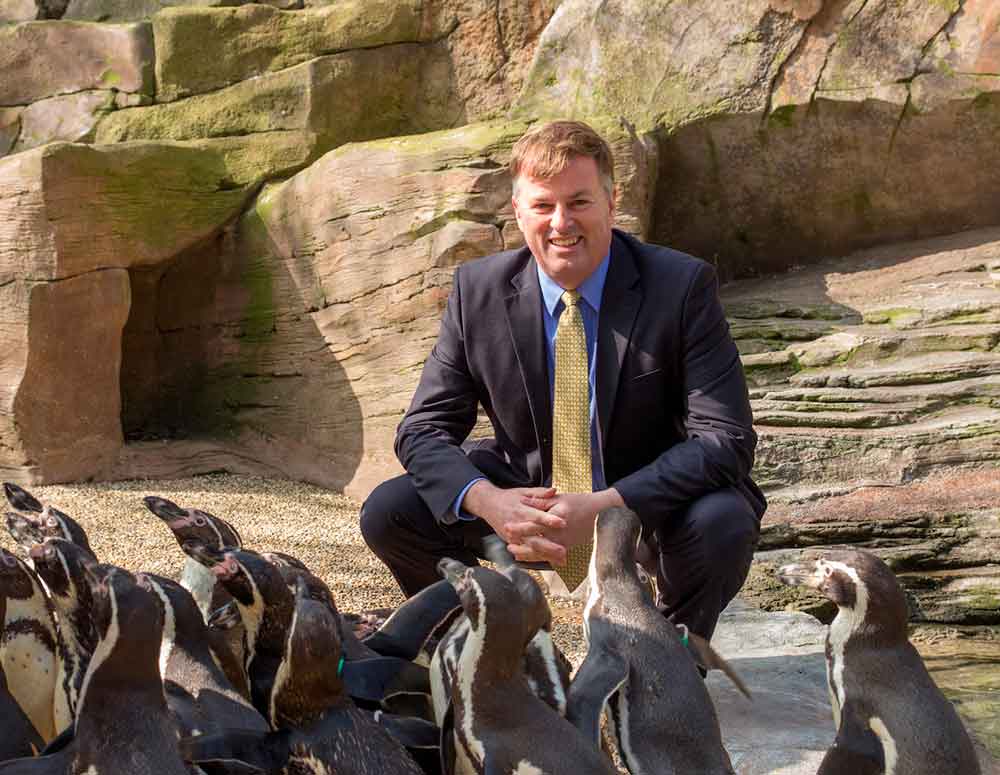 Throughout the year there are seasonal events. These include the Sky Safari, African Summer and, new for 2017, a food and drink festival. Running over the Christmas season is the Festival of Light, including a special Winter Safari.

“We’ve enjoyed a period of significant growth,” says Bob Montgomery (above). “Attendance is up and we’ve recently had the strongest guests scores ever.” As Chief Executive of Longleat Enterprises, Montgomery reports to Ceawlin Thynn, or Viscount Weymouth, the Marquess’ son. What started as “a little consultancy role” in late 2013 turned into a full time job the following spring.

A second series of the BBC fly-on-the-wall programme Animal Park, screened this spring/summer, hasn’t done any harm. “It’s been compelling even for me,” says Montgomery, “and I was here when they filmed. It does flatter us.”

With a national profile and annual attendance now in seven digits, Longleat is sitting as pretty as the Elizabethan house that is home to its two lords. Completed in 1580, it was one of the first British stately homes to open to the public. Today over 40% of visitors drive two hours or more to get there. And prior to/after their visit, about a third of guests spend the night in a hotel or “somewhere other than their own bed,” says Montgomery. 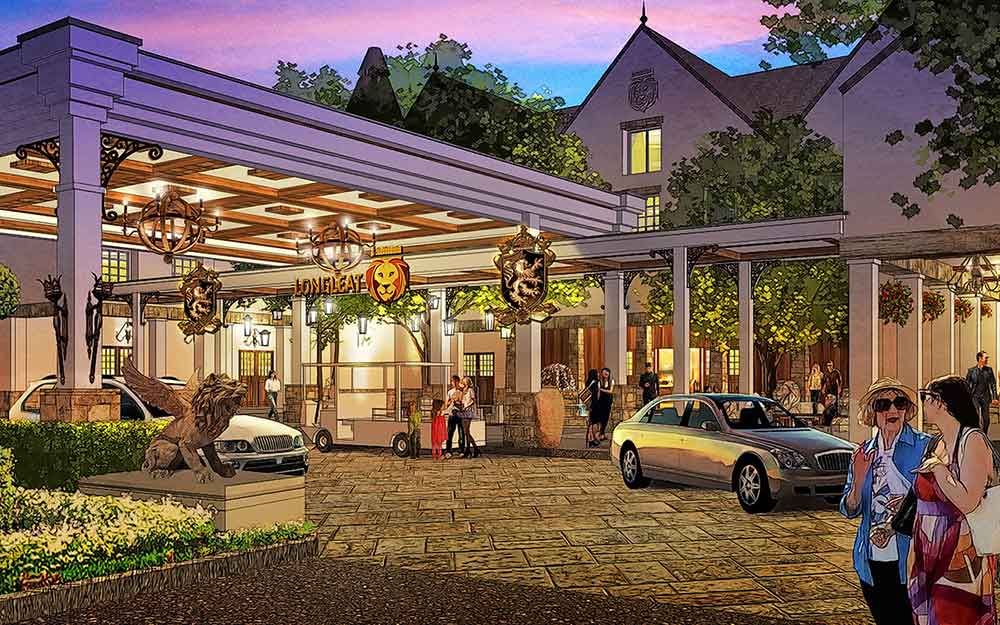 It is against this background that Longleat decided the time was ripe for a new hotel. Working with FORREC, with whom it embarked on a 10-year masterplan in 2016, Longleat Enterprises is now in the process of refining designs for what will eventually be a 240-room property including waterpark and conference facilities. Planning permission was approved by Wiltshire Council in July. The wider Longleat Estate, which is vast, already includes a handful of hotels. There’s also a waterpark at Center Parcs Longleat Forest, which occupies part of the estate.

Montgomery explains why the new venture is needed. “People want the opportunity to stay overnight in a hotel aimed at families,” he says. “The other hotels in the group are good businesses, but really they are 4-star spa hotels. You wouldn’t call them family-friendly. We have another hotel with a pub that is always filled with our guests, but there’s only 17 rooms so it doesn’t solve the problem.” 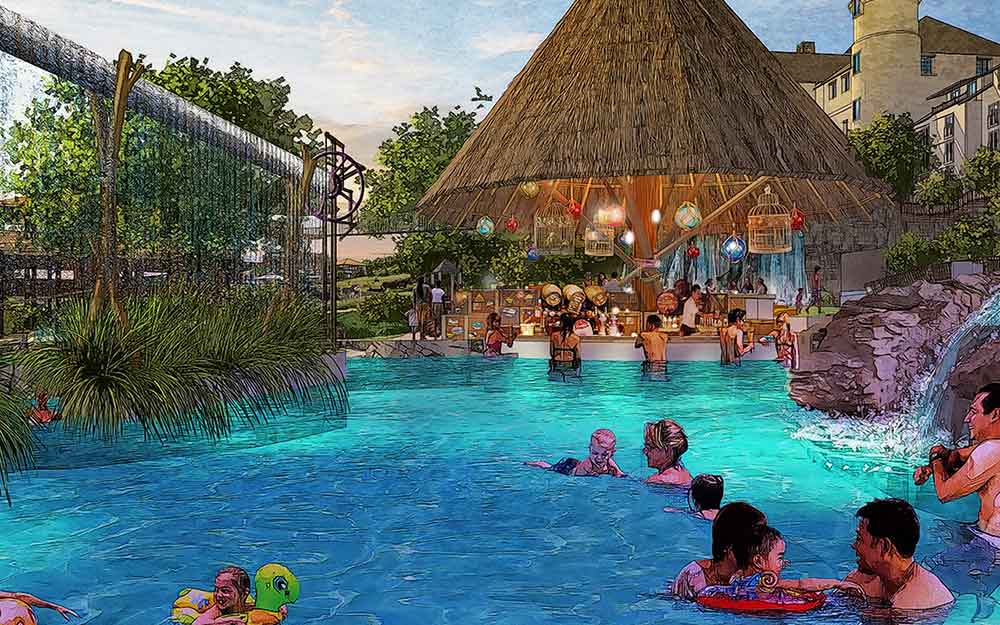 The hotel, waterpark and surrounding landscaping will occupy up to 10 acres of the 125 acres of Longleat open to the public. Theming will be provided with a light touch.

“We haven’t finished the architectural treatment yet. However I think what you see will be in keeping with the architecture of the house,” says Montgomery. “But  certainly there will be some animals elements to it, and an element of exploration.”

The location for the hotel, close to the entrance of the safari park, was a carefully considered decision. Situated on a hill with panoramic views of the Wiltshire countryside, it will offer guests an air of exclusivity.

“The hotel is an ideal fit for the setting and expands on something very unique,” says Eric O’Rourke, Director of Resorts at FORREC. “It provides a natural amphitheatre for watching 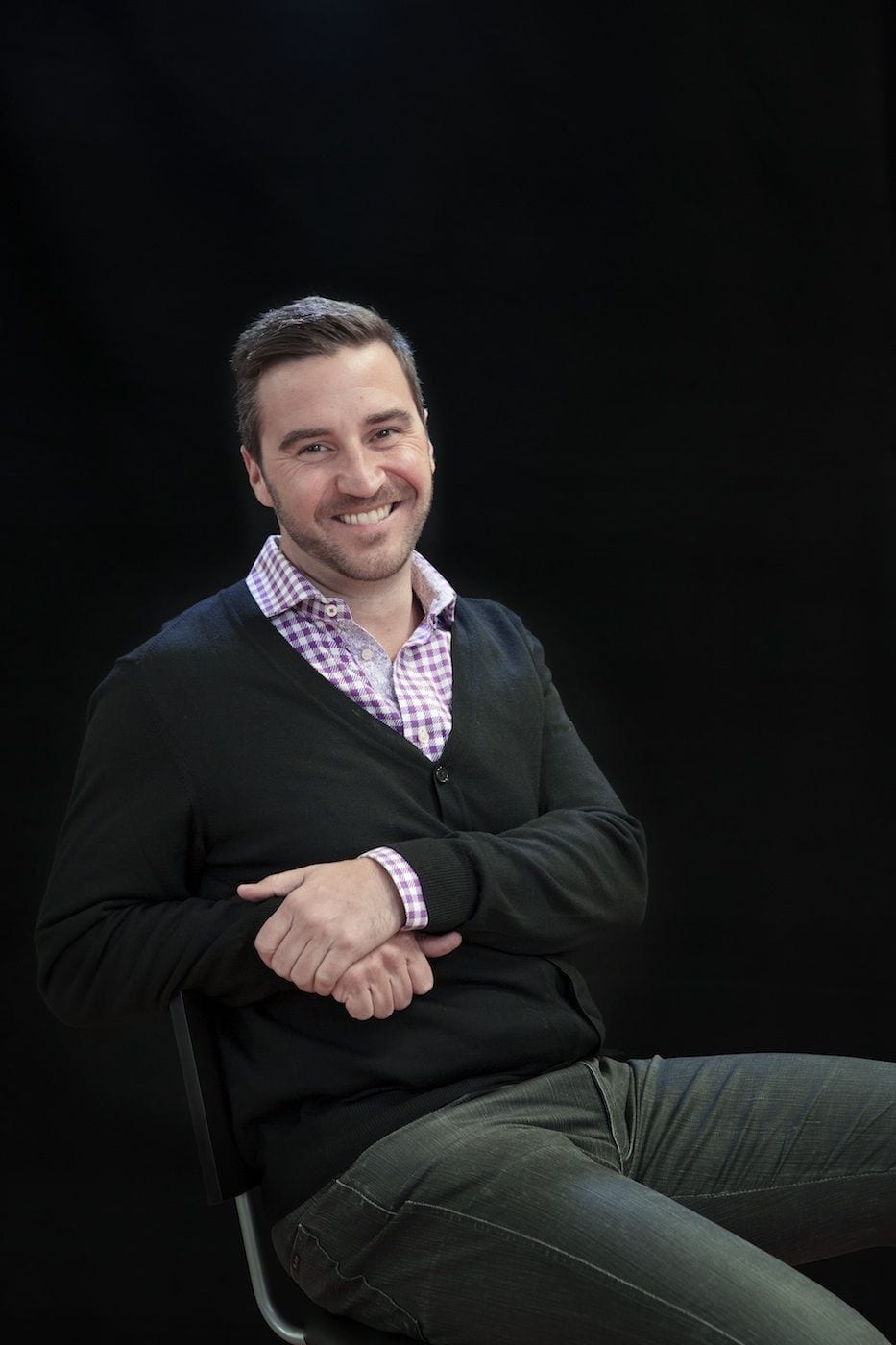 animals such as rhinos and buffalo, protected by a forested area. Guests will be given a front row seat to enjoy the natural show.”

Vendors for the waterpark will be selected in the coming months. Attractions will include slides, of course, an indoor-outdoor lazy river. There will also be what O’Rourke describes as “a few signature pieces that are uniquely Longleat.” Nevertheless it will be a modest-sized facility, with attractions to match.

“The target market will be kids under 12 and their parents,” says Montgomery. “I can see people spending an hour or two in the waterpark in the morning, and then again in the evening when they come back to the hotel. At Center Parcs you may spend three to four hours of your day in the waterpark. We have talked about opening it up to others when we have capacity, but its principal function will be as an amenity for hotel guests.”

O ‘Rourke adds that this approach, coupled with Longleat’s strategy to target the corporate market midweek and topping up the attendance in off-peak times makes sense. “Waterpark hotels with conferences facilities are actually a very good business model,” he says. “One caters to the extended weekend and the other takes care of the rest of the week. The mother and father could take the family, with children and one parent taking in the entertainment while the other parent is doing business.”

Forrec and “a happy problem”

Montgomery is excited by the opportunities the hotel, waterpark and other developments present. “We have put an incredible piece of land aside for this expansion,” he says. “I always saw us as more than just an animal experience. The events we have done the past few years have been so successful. Our growth has come in the shoulder season. With the Festival of Light, our November and December is now bigger than July and August. Now with the hotel we can become a true year-round destination.”

As it has developed its special events programme, Longleat has created what Montgomery describes as “a happy problem. As an attraction we have grown organically, but now are seeing the pressure on our infrastructure. There are days where we are just slammed. Some of the guest circulation, F&B, retail and guests service functions have been a little bit undirected. That’s why we brought FORREC in, to help us with some of that thinking.” 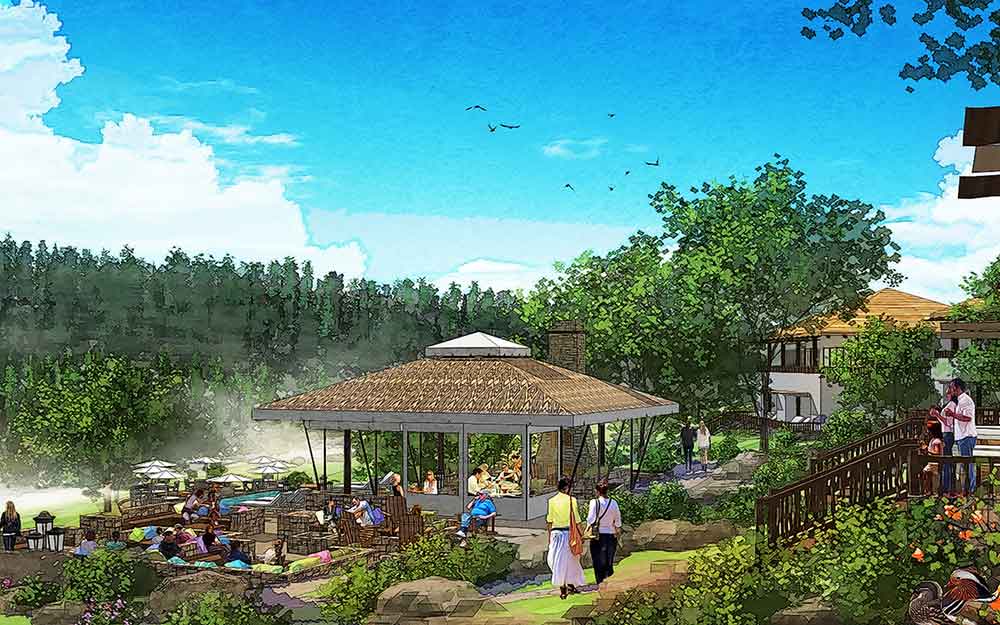 “We began by masterplanning the site to provide a more holistic experience,” says O’Rourke. “We looked at how they can develop over the next 10 to 15 years by expanding the house experience, the safari and what they call the adventure park. Longleat have been a great client to work with, they listen, seek our opinion; it’s collaborative. As we worked with Bob Montgomery, the project evolved. It now includes one of the things we do best: hotel and resort planning seen through an entertainment lens.”

As well as the hotel and waterpark, new multi-generational experiences such as ropeways and zip lines may be added to the mix. And there will be changes to the safari park, too.

“Even though it’s a 7-mile long circuit, it became obvious we needed to grow capacity,” says Montgomery. “We looked at putting buses through, doing a land train, something like that. But it just never felt right. What’s great about the safari park is that shared experience of going through there with your family in the car. Not everyone is blessed with the amount of land we have. We can create some really great new animal environments.”

Longleat is currently participating in a last ditch international race to save the world’s rarest rhino from extinction. Eggs from its three female southern white rhino are currently incubating in Italy. Animals bred using these or eggs from the last living females northern white rhino in Kenya could find their way back to Wiltshire. “That level of conservation is where we we want to be,” says Montgomery. 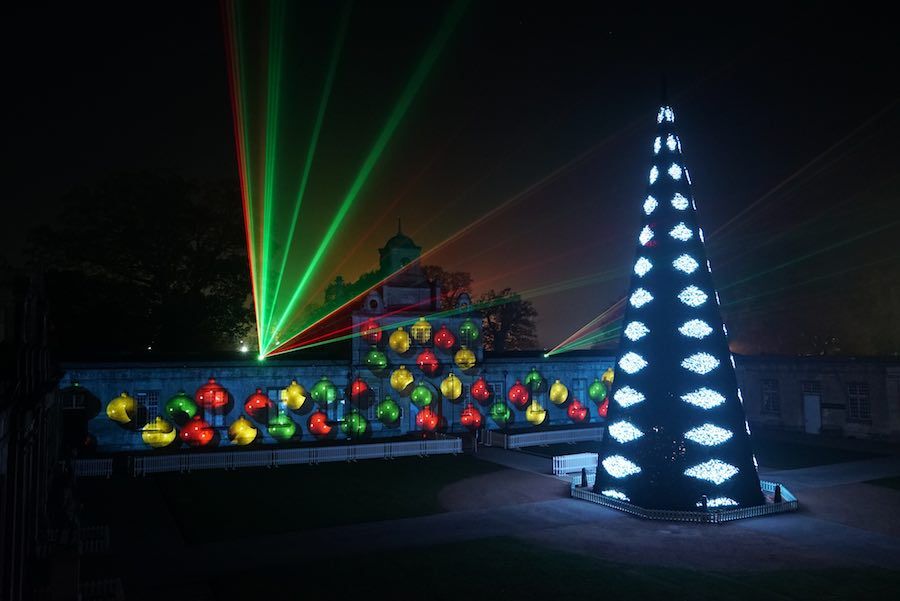 Yet ultimately Longleat Enterprises exists to preserve Longleat House. “That’s why the safari park was started back in in 1966. Because we are Grade I listed, there’s always a conflict between doing anything and making sure we do the right thing for the heritage of property. I hope we can create something like the menagerie that used to exist but with today’s standards of animal care.”

Montgomery adds that the legacy the upcoming expansion will create is not lost on Lord Weymouth. “Ceawlin’s father started the safari park. It’s a significant part of the estate. This development has generational consequences for Emma [Lady Weymouth], Ceawlin and their young family. This is a long-term investment for a family-owned business.”

The goal is to grow attendance at Longleat to 1.2 million by 2023, which seems perfectly achievable given current numbers. But of course the hotel and waterpark will also increase length of stay and spend per head.

Longleat Enterprises is already seeing positive results 30 miles (48km) west at Cheddar Gorge. Daytrippers and tourists come to marvel at the awe-inspiring cliffs and subterranean stalactite caves. According to Montgomery, Longleat owns “one side of the gorge and a good chunk of the high street”. They have been part of the estate for over 100 years, but only recently come in for scrutiny.

“Cheddar Gorge is one of Britain’s natural wonders,” says Montgomery. “But if you spend any time there you would like more things to do. And it’s still way too seasonal. One cave is kept quite natural and spectacular. However, we’ve made a big investment in the second cave, which was more of a show cave and, to be honest, a pretty corny show. We put in something that is much more about the history of the region in prehistoric times. We have also added some escape rooms and added what I would call a festival programme, similar to the strategy we have here at Longleat. We’ve turned around a decade long slide in terms of visitation and we are seeing really solid growth.“ 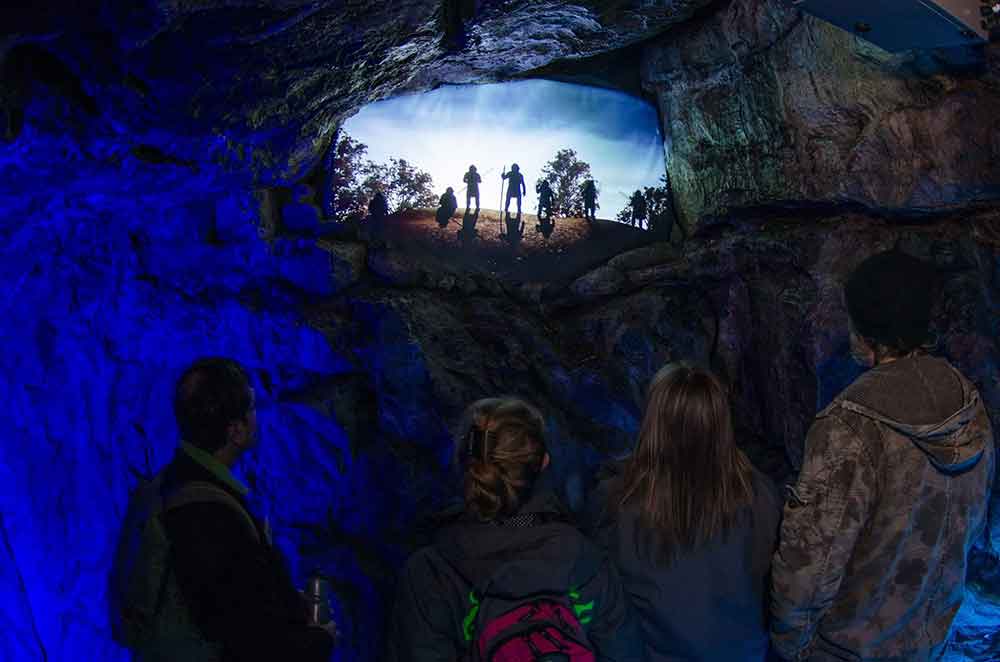 Brought on board to provide AV effects within the second cave at Cheddar Gorge was LCI Productions. “They did a terrific job,” says Montgomery. The London-based producer of light shows and spectaculars scored a hit at Longleat last winter when it provided 3D mapping, an LED Christmas tree and some engaging animated content for the venue’s 50th anniversary celebrations. Such after dark entertainment, including a Christmas-themed finale, will be a highlight again of this year’s Festival of Light season. You have until January 8 to see it.

And a good time was had by all. IAAPA’s record-breaking Attractions Expo 2017 scales new heights 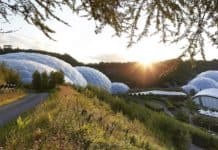