Cleveland’s Rock & Roll Hall of Fame is to undergo a $100 million expansion. Practice for Architecture and Urbanism (PAU) has won a competition to design a new 50,000 square foot expansion of the famous rock music museum on Lake Eerie, Ohio

Robert Madison International and the DLR Group will serve as architects of record on the build. Construction is slated to start early in 2020 following an extensive schematic design phase.

In a press release, Greg Harris, president and CEO of the Rock & Roll Hall of Fame said that the PAU-led team, “best met the needs of the Rock Hall in terms of contemplating a building that would channel the energy of Rock and Roll, excite future visitors, inspire donors and supporters, pay homage to the existing I.M. Pei building and address the Hall’s spatial needs.”

The current “heart of glass” museum spreads over 150,000 square feet. The new “Clash” expansion will increase that by 50,000 square feet. This is set to include an additional 10,000 square feet of space for large-scale travelling exhibitions. There will be new interactive classrooms, indoor spaces for performance and gatherings, and more room for on-site archives. A rooftop deck is likely to overlook the lake. 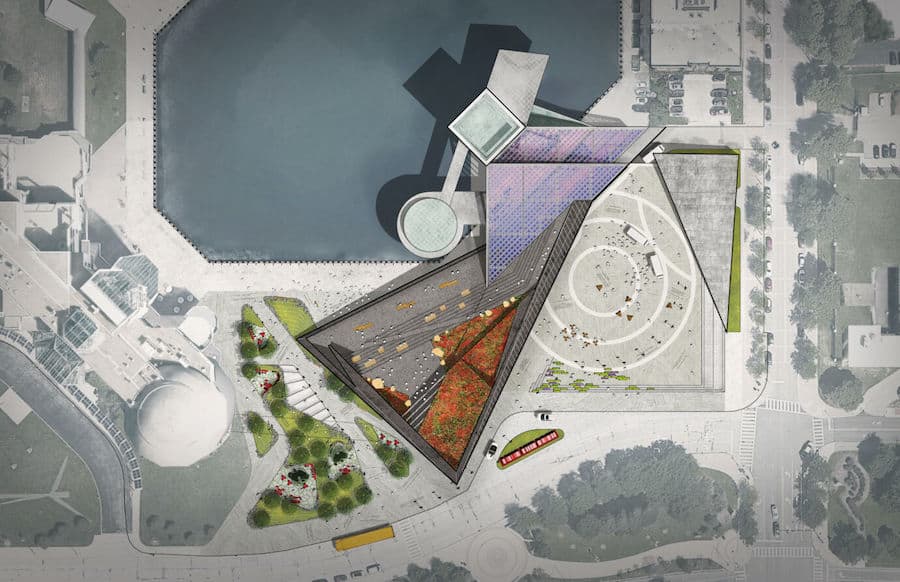 Creating a museum campus for the city

The new triangular extension will expand out towards the city, joining the science centre which neighbours the site, creating a museum campus. The aim is to provide a lakeside meeting place for both visitors and Cleveland residents.

“The Rock & Roll Hall of Fame is the heart of Cleveland culturally and socially, and yet physically speaking, the Hall is disconnected from the city that loves it,” says PAU. “The triangular form of the Clash bridges this gap by pulling three forces together, the City, the Lake and the Pyramid.”

Although plans have not been finalised, it is possible that a pedestrian bridge or even a wider land bridge could connect the Hall to downtown.

The new building will be clad in galvanised steel, evoking the industrial landscape of Cleveland’s past. However, the steel and concrete of the hard-lined spear-shaped extension will be softened by more elemental touches.

James Corner Field Operations put together the preliminary landscape proposal, inspired by the geography of Northeast Ohio. This incorporates the Prairies, the Appalachians, the Northern Hemlock Hardwood Forests, and the Allegheny plateau.

Meanwhile, L’Observatoire International has planned lighting that will “enhance not upstage the performance”. It is conceived to be “electrifying, warming Cleveland’s cold winters, cloudy skies, and early dusk with the glow of the beat.”

The interior palette is one of red and black, evoking the gritty backstage feel of rock gigs – in contrast to the original building’s austere white interior. Unifying nature of rock and roll

Above all, PAU hopes the museum can help bring people together. “Rock & Roll – like NASA and pizza – brings us together like few other cultural phenomena at this moment…when the world seems ever more divided,” says Vishaan Chakrabarti, founder and creative director of PAU.

He says the Hall is “much more than a museum, an entity that punches well above its weight”, nothing that it will not only act as a place for the world’s greatest rock talents to perform but also as a classroom for local students and a venue for family events.

“The Hall is a pan-cultural blockbuster that enriches the lives of everyday people and reminds them of their potential as both individuals and collectives to create their ‘own path in music and in life’,” says Chakrabarti.

Last April, planning permission was given to build on the city-owned land with the council unanimously agreeing to the proposal

The initial cost was stated as $30 million. This has now risen to an estimated $100 million.