The nighttime spectactular ‘Nocturnal Experience in Teotihuacan’ is set to wow visitors once again this November after it was first performed a year and half ago.

Since then, 45,000 spectators have been captivated by the projection mapping experience at the UNESCO World Heritage Site.

Created by multimedia technology specialist, Cocolab and powered by Christie, the 45-minute show projects atmospheric visuals across the Pyramid of the Sun, then along the Avenue of the Dead, finally reaching the Pyramid of the Moon.

A total of 19 Christie Roadie 4K45 projectors illuminate the site with 20 million different colour tones. As the visuals play out, a narrator tells the history of the Teotihuacan culture. 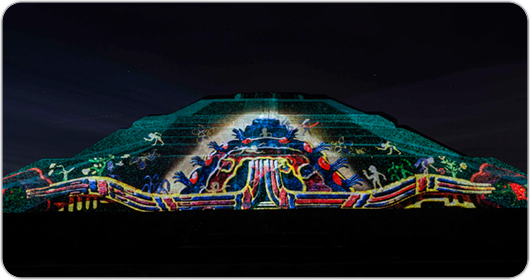 Christie and Cocolab worked together for a year on the project creating the mapping visuals. This was done in collaboration with the Tourism Department of the State of Mexico, with advice from INAH (National Institute of Anthropology and History of Mexico).

“They guarantee us the brightness and quality we need to deliver the unique experience this project called for.”

The Christie projectors are placed in two mobile units, and are run from Mac Pro units using NUUP software developed by Cocolab. The total brightness of the image powered by the 19 projectors is in excess of 850,000 lumens, a first for Mexico.

“We are delighted that our Christie Roadie 4K45 projectors have contributed to this stunning projection-mapping show, which is sure to linger in the audience’s minds for a long time. It’s not often that you get to see such a large number of powerful projectors in a single event in Mexico.”