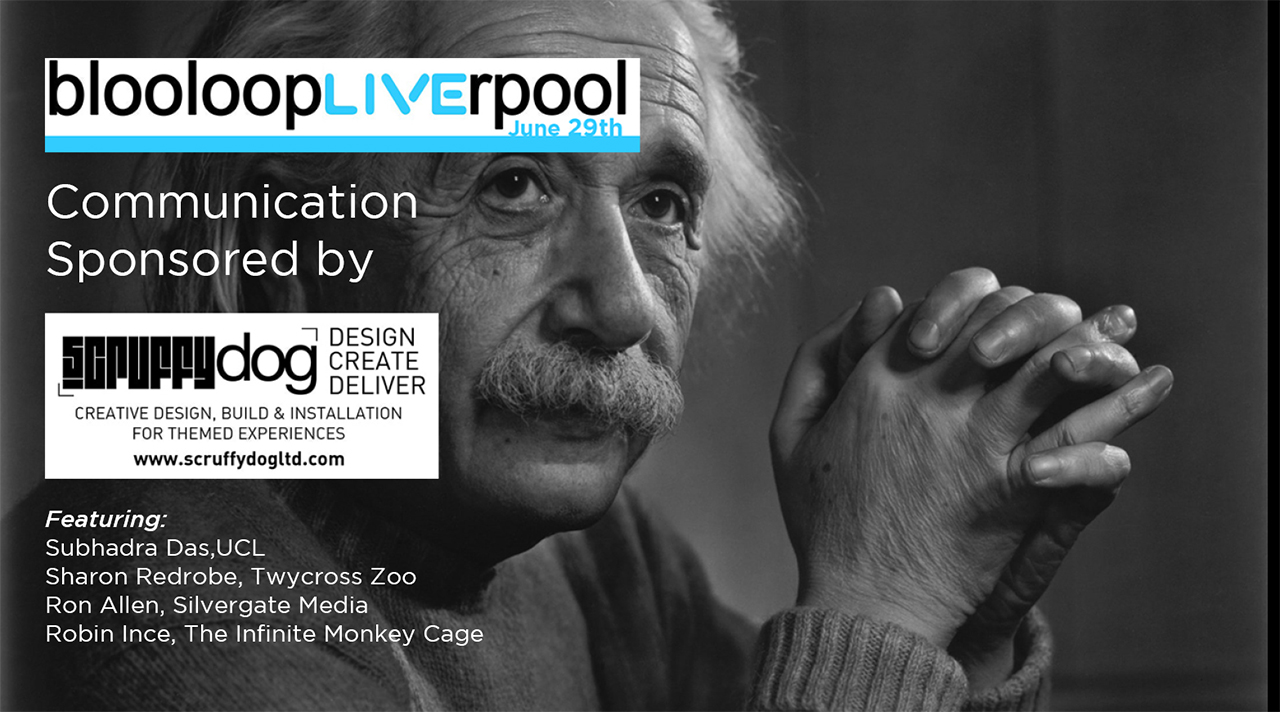 blooloopLIVErpool, to be held on June 29th, is a one-day conference focusing on the future of visitor attractions.  We are delighted to announce details of our Communication session.

Thanks to platinum sponsors of blooloopLIVErpool, Lappset Creative:

and gold sponsors of this session Scruffy Dog.

With a focus on how to engage visitors with scientific concepts and conservation goals, this session features Robin Ince, comedian and co-presenter of BBC Radio4's Infinite Monkey Cage. The Infinite Monkey Cage is a popular science comedy programme that deals with diverse scientific topics such as the concept of infinity, discussions about dark matter and the nature of reality which Robin co-hosts with Prof Brian Cox.

Robin Ince is widely recognised as one of the UK’s most accomplished, versatile comedians with a string of awards and media appearances to his name.  He is predominantly known as a science populariser and the pioneering comedian behind hugely successful live events such as 9 Lessons and Carols for Godless People, The Book Club and School for Gifted Children.

Robin presents the Sony Award winning Infinite Monkey Cage on BBC Radio 4 with Brian Cox. His other regular radio appearances include: The News Quiz, Just a Minute and as a music profiler on Steve Lamacq’s show for BBC 6 Music. He has made numerous TV appearances on panel and stand up shows including; The Review Show and The TV Book Club as well as presenting documentaries including Schrodinger’s Cat and Vinyl Culture.

He has won three Chortle Awards, including the Time Out Outstanding Achievement Award and was nominated for Best Live Show at the British Comedy Awards.

Robin will be sharing the secrets of engaging an audience with the more abstract concepts of particle physics and finding comedy in the cosmos.

Sharon has over 25 years of experience working in academia, the charity sector and business, with expertise in change management, performance development, business planning and strategic development.

Sharon has had a life‐long fascination with wildlife and a belief in the role modern zoos must play in conservation, whilst remaining relevant to and supported by the public. In a rapidly changing world,  Sharon believes that science‐led solutions to saving wildlife that also engage the public are essential to the success of a ‘one world’ future.

Appointed as CEO of Twycross Zoo in 2013, Sharon has invigorated this traditional business. Now attracting 500, 000 visitors a year, she has turned a loss‐making charity into one generating a surplus within two years, driving the new strategic vision for the site. Her unique combination of animal welfare sensibility, scientific rigour and business acumen has been instrumental in rejuvenating Twycross Zoo, recently launching the 20-year £55 million masterplan to transform the zoo into a world‐class park, securing £4 million investment in the site during 2015.

Her efforts saw her recognised as Business Woman of the Year 2015/6.

Sharon will be sharing the secrets behind her success and how to engage visitors with a conservation message.

Subhadra is one of a team of curators working with the teaching and research collections at UCL. She is the primary contact for UCL Pathology Collections and the Galton Collection. She has three degrees and began her career as an archaeologist before moving across the heritage sector into museums.

Although she works with two very different collections, the uniting theme is the history of science and medicine; including the often contentious ideas of working with human remains, the history of race science and eugenics. Subhadra facilitates the use of these collections for teaching at UCL and beyond, and regularly runs tours and object-based learning sessions at UCL’s museums. She has also engaged with wider public audiences through stand-up comedy initiatives including UCL’s Bright Club and Museum Show-off.

Subhadra will be talking about communication in the context of curation.

Ron Allen is SVP Commercial at Silvergate Media, a TV production and licensing company based in London and New York. Founded in 2011, Silvergate’s mission is to develop world-class children’s brands which inspire, entertain, educate and engage through innovative content, great products and strong partnerships.

Silvergate are owners of two preschool properties; Peter Rabbit and Octonauts. They exploit their properties across a range of formats, from new television productions to toys, apparel, licensed merchandise and live interactive experiences. They are currently in pre-production on four brand new properties for partners including Disney, Nickelodeon and Netflix and their development slate continues to grow.

Ron will be telling us how the Octonauts have informed a generation of Pre Schoolers about symbiosis.