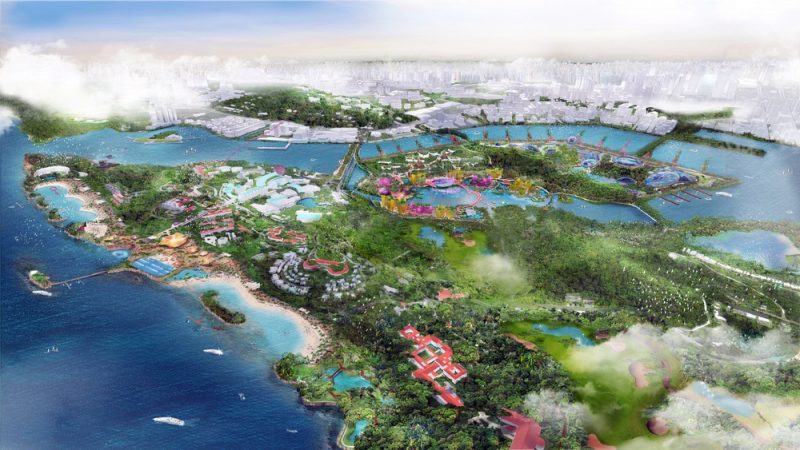 Pulau Brani, an island between Singapore and Sentosa, is set to become a resort island with new attractions similar to those on Sentosa.

Pulau Brani, which currently houses the Brani Terminal, is likely to welcome a ‘Downtown South’ resort, according to the Prime Minister of Singapore, Lee Hsien Loong.

“We will build new attractions on Brani, just like we have Universal Studios on Sentosa,” said PM Lee (via The Straits Times).

‘Downtown South’ would be similar to ‘Downtown East’, a lifestyle and entertainment destination for Singaporeans and National Trades Union Congress (NTUC) members.

Relocating the Brani Terminal to make way for resort

‘PLAY’: There are many possibilities for fun & recreation in the GSW. First, we will start by redeveloping the 2 old power stations in Pasir Panjang. Next, after Brani Terminal moves out, we can develop Pulau Brani together with Sentosa. #ndrsg pic.twitter.com/BjNMyhqyOt

The plans for Pulau Brani are part of a wider project to rejuvenate the Greater Southern Waterfront, a major waterfront development in Singapore.

PM Lee said (via Today): “This will free up prime land for redevelopment. It will be an opportunity to reshape the Greater Southern Waterfront into a new place to live, work and play.”

“When PSA moves out of the city and Pasir Panjang terminals, these old spaces will once again be vacant, another blank slate,” he added. “A new generation will have another opportunity to imagine and build part of their vision for Singapore.”

PM Lee: The GSW comprises 30km of the southern coastline of Singapore, from the @GardensbytheBay East area, all the way to Pasir Panjang. It contains 2,000 hectares of land, 6 times the size of Marina Bay, or 2 Punggols. #ndrsg pic.twitter.com/s5VssDQdqH

“There are many possibilities for fun and recreation,” said PM Lee.

Meanwhile, Senosa’s beach areas will be revitalised, while its nature and heritage trails will be expanded.

Meanwhile, a new lifestyle quarter called Siloso Green is opening in Sentosa by the end of this year. It will include restaurants, shops, concert and event spaces, and waterfront accommodation.