The All Blacks Experience opened yesterday at SkyCity, Auckland. The immersive and interactive attraction is a joint venture between Ngāi Tahu Tourism and New Zealand Rugby.

The All Blacks Experience, which took seven years to plan and over a year to construct, received $2,280,500 of government funding. It’s the first major new tourist attraction to be launched since Aotearoa New Zealand closed its borders due to the pandemic. The only rugby attraction of its kind in the country, it’s also the only dedicated All Blacks attraction in the world.

Dame Julie Christie, All Blacks Experience Board Chair, opened the attraction. “This is a huge milestone after a challenging year for everyone,” she said, as reported in Scoop.

“Having New Zealand Rugby and Ngāi Tahu Tourism working together has delivered something really special, and I’m excited to see and hear the reaction from people when they experience this state-of-the-art guided encounter.”

Ngāi Tahu Tourism is one of the largest tourism operators in New Zealand with 12 businesses that include Rainbow Springs, Shotover Jet, Franz Josef Glacier Guides, Dart River Adventures, Hukafalls Jet, Agrodome and Glacier Southern Lake Helicopters.  It also owns half of the astro-tourism Dark Sky Project.  The company is a subsidiary of Ngāi Tahu Holdings which is governed by Te Rūnanga o Ngāi Tahu.

The state of the art encounter aims to express the passion of the All Blacks story in an immersive encounter with the game, its history, its traditions and its players.  A 45-minute guided experience lies at its heart.  The All Blacks are synonymous with the haka and visitors will experience the full force of the haka via a four-metre high screen bombardment.

There are five interactive zones including a chance for visitors to test out their own rugby abilities.  A fully immersive experience shows what it’s like to perform under the intense pressure of a top-class rugby team.  The game’s best-known players also tell their stories, along with legends of the past.

The attraction will include the largest All Blacks retail outlet in New Zealand.  It’s the only official store for fans to purchase personalised jerseys.

“The state-of-the-art All Blacks Experience in Auckland will be a world-class attraction once international tourism can safely resume,” said Tourism Minister Stuart Nash, speaking to Mirage News. “It will be a major drawcard for visitors to the wider Tāmaki Makaurau region.”

In the interim, the venture is likely to appeal to the domestic audience.  “Any Kiwi who is passionate about rugby and our sporting and cultural history should consider putting this new attraction high on their list of must-do experiences,” said Nash.

“The lack of international visitors has been hard on Auckland’s economy,” he continued. “The tourism and hospitality industries are now looking for new ways to attract domestic visitors to our largest city.” However, he pointed out that it is “crucial” that New Zealand remains visible as an international tourism destination and is optimistic about the future.  “This new attraction shows there is much to be confident about for the future of our tourism industry”, he concluded. 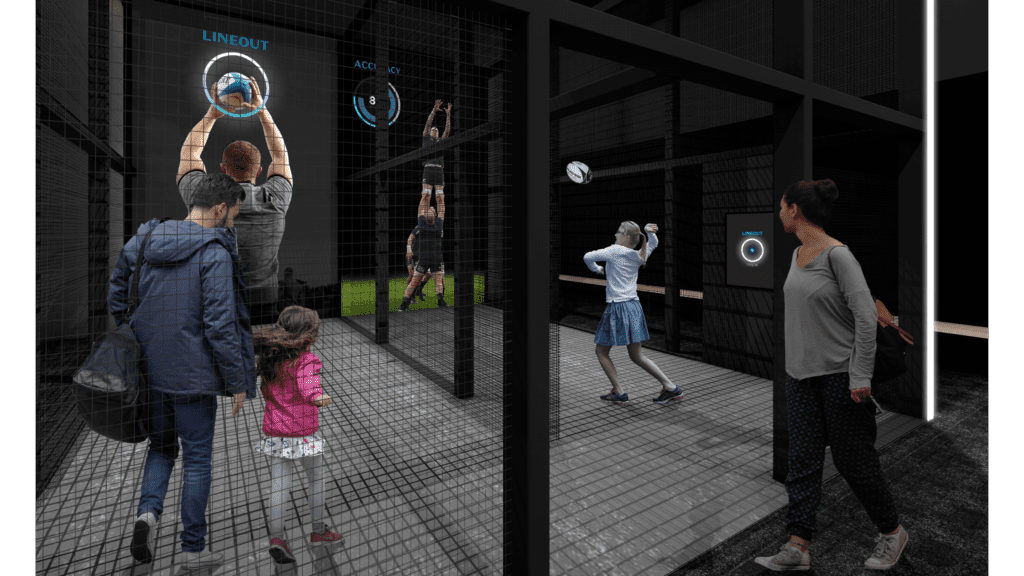 EQMade managed the build and content creation for the attraction.  The Christchurch-based experience design consultancy used leading-edge technology in the build.  “From the moment visitors enter the experience; our technology expertise is on show,” says Ed Burak, Design Director at EQMade. “From the haka to the interactive section, we have showcased not only the All Blacks but the amazing capability of New Zealand technology to deliver and wow.’

Satellite Media were responsible for the RFID wristbands that allow interaction within the tour – the bands allow visitors to play games, take photos and collect interesting snippets of content.  Wellington-based Toulouse helped design systems that support the storytelling experience while Creative Post, based in Auckland, brought to life the stories of the players.

Toca Football recently confirmed that it is opening its first immersive, soccer-themed entertainment venue, TOCA Social, at the O2 in the UK in late 2021.