The New Frontier program at Sundance will return bigger than ever before – showcasing tech-driven forms of storytelling including AI, AR and VR.

The program illustrates the growing importance of tech including virtual and augmented reality.

As reported on CNET, New Frontier’s chief curator, Shari Frilot, said: “We’re seeing work being done on a larger scale. This year, we’re … seeing more kinds of stories being made possible because of innovations.

“We’re trying to get back to what we started with and lost over the years: getting back the social intersection element of New Frontier. [It’s] about getting lots of different kinds of people in the same room talking about work that is really surprising them.”

Sweet Dreams is an “otherworldly dining experience”. Using social VR, food and AI, this location-based experience creates synesthetic experiences with food. For example, visitors might sip a tasty beverage and it will feel like drinking the room around you.

Despite something of a slump in VR at home, location-based VR had a momentous year in 2018. It is now a billion-dollar industry. The location based experiences vary from VR installations at restaurant chains (like Dave & Buster’s, where a VR Jurassic World installation was “meaningfully incremental” to the company’s revenue) – right up to fully immersive experiences such as The Void. 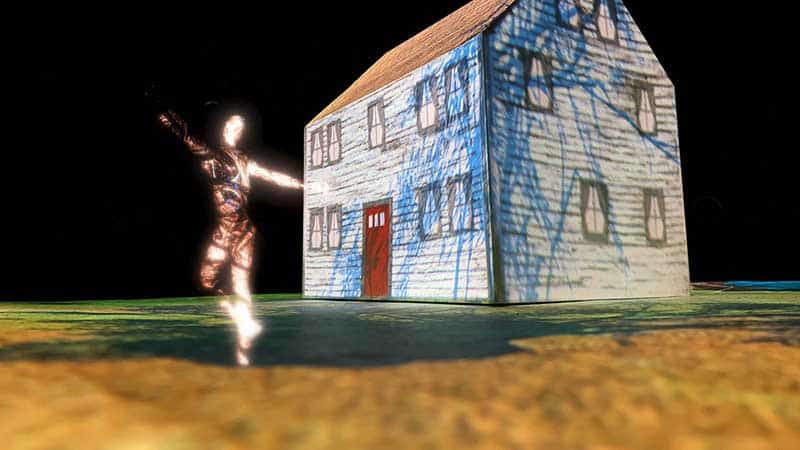 The Dial uses augmented reality, projection mapping and sculptural elements. In the murder mystery, four participants use their phones and open-ear headphones to analyse an unfolding drama and solve the mystery.

The Royal Shakespeare Company use Magic Leap headsets in their AR-powered production of the “Seven Ages of Man” speech from Sheakespeare’s As You Like It. The mixed reality experience features Shakespearean actor Robert Gilbert and an original musical score by composer Jessica Curry.

AR is often heralded as the replacement to VR. Apple CEO Tim Cook has called AR the “larger of the two, probably by far.” Disney CEO Bob Iger has also declared his support for the tech. Magic Leap launched their debut product last year.

An installation called Mica, by Magic Leap, looks to be a glimpse of the future of Artificial Intelligent Assistants. Mica enters into a “gestural exchange” with a participant, and promises to “connect you with the culture that feeds me.”

Many attractions are developing AI-powered employees and assistants that can intelligently respond to guest enquiries. But this is only the beginning of the technology’s applications and potential.

Meow Wolf is a group of artists from a variety of disciplines came together just to make art. It ended up becoming, not just a creative powerhouse, but a profitable business.

In August, Meow Wolf announced a partnership with Elitch Garden to open a new art ride called Kaleidoscape in April 2019.