Over a 65 year period, Efteling has shared dozens of fairytales with millions of Dutch families – and today it’s entertaining more visitors from a wider area of Europe than ever before.

It’s not just the stories inside this world-famous theme park that are enduring. Many of Efteling’s staff are long-serving too. With 19 years of service, Chief Operations Officer Coen Bertens is no exception. Following the opening of the park’s largest and most expensive attraction ever – Symbolica – he discusses all the above and more.

Efteling is a fantastic environment to work. I think that is why we have so many long-serving employees. It is like a family. The park is open year-round, so that means a lot of us get to sign year-round contracts too. That is not true at all theme parks.

After my first 10 years here, I left to work in energy trading. My goal was to do this for three years but after six months I got a really great offer to be park manager so I came back. I missed the park and dealing with the guests, but for me it was important to go away and get my mind clear and think about what I wanted to do. It turned out I wanted to stay in the entertainment industry!

In the Netherlands, Efteling is a cultural thing. Because we have been existing for 65 years now, there are many generations of family that have visited the park. So first you were here as a child, then as a mother or father and then a grandparent. People spread the word, and if you are really great people want to come back. I think in the local Brabant region, people come every year, but for the people further away it’s every every three to five years.

We are becoming a short stay destination for more foreign visitors. This is a trend we noticed since opening the Bosrijk holiday village in 2010. The guest profile is now 80% from the Netherlands and 20% from abroad.

Listen to your guests

We see a lot of families from Belgium and [neighbouring German state] North-Rhine Westphalia, but also a lot of people coming over from the UK. We have agencies in each of these regions because each has its own culture. And all our signage in the park is now not only in Dutch but also English, French and German.

It’s OK to say you listen to your guests but you have to have a good system for listening to the feedback and pay a lot of attention to it. We do a lot of surveys, and also we have an advisory board. Every 25th guest get a card where they can fill in their names and say what they think about Efteling; everything from rides to food & beverage.

We know that a lot of people fill in those cards because they can win a stay at our Bosrijk or Loonsche Land holiday villages. Our guest satisfaction rate it a very important KPI not only for us but for the advisory board.

The biggest change when we went to year-round opening was that our technical department now does most of the maintenance in the evenings and overnight. The park began opening for 365 days a year in 2010 when we opened Bosrijk. Our guests really appreciate the accommodation because it’s tough to do all the park and its attractions in one day.

The following year we added the Raveleijn show in partnership with Puy du Fou and then, in 2012, Aquanura. This is Europe’s largest water and light show and brings each day/night in the park to a close in spectacular style.

There a lot of theme parks in this part of Europe but I think there is still room for new entrants if you offer something different and have great quality. If you want to copy something, it’s not going to work. But if you look at, for example, Puy du Fou in France, they are really unique. Even though they are in a region where there aren’t a lot of inhabitants, they continue to increase their visitors.

A fairytale forest in Efteling

Efteling started life in 1952 as the Sprookjesbos (Fairytale Forest). Our fairytales are well-known, what is less known is how much forest we still have. We are more nature with attractions than a theme park with a little bit of landscaping. In fact, around 90% of Efteling is covered with trees. That and the very nice decoration throughout the park make it a very pleasant place to visit.

For us, indoor attractions are important. Because we open 365 days a year, we of course get some rainy days. Efteling is well-known for its dark rides including Droomvlucht, Fata Morgana and Carnaval Festival, and now Symbolica. The attraction opened in July at the end of Pardoes Promenade in the centre of the park. Previously the adjacent square had a fountain in it, but really it needed an icon.

Symbolica is set in the palace of Pardoes, our magical jester character, and is the first attraction to feature him as the star of the show.

Symbolica is a classic dark ride. I don’t want to give too much away, but I would say the pre-show is very impressive. Before you even get in the ride, there is a wow effect. There are some very special effects inside. We always look for new techniques and technology when developing attractions, however classic the story may be.

One of the key things about Symbolica is that there are three different tours you can make through the attraction depending on the ride vehicle you take. What is also nice is that it is 360° themed. We themed the floor, the ceiling, the walls; everything. There is so much to see, you have to do it again and again!

Other parks can do shooting rides, but it’s not Efteling. I’ve ridden other dark rides where there is too much focus on the shooting, and you don’t see the decoration. We have just two scenes in Symbolica where there is some kind of interactivity. Guests can rotate their own ride vehicle, which is really nice. Overall we want our guests to enjoy the experience, and I think we’ve got the mix just right. 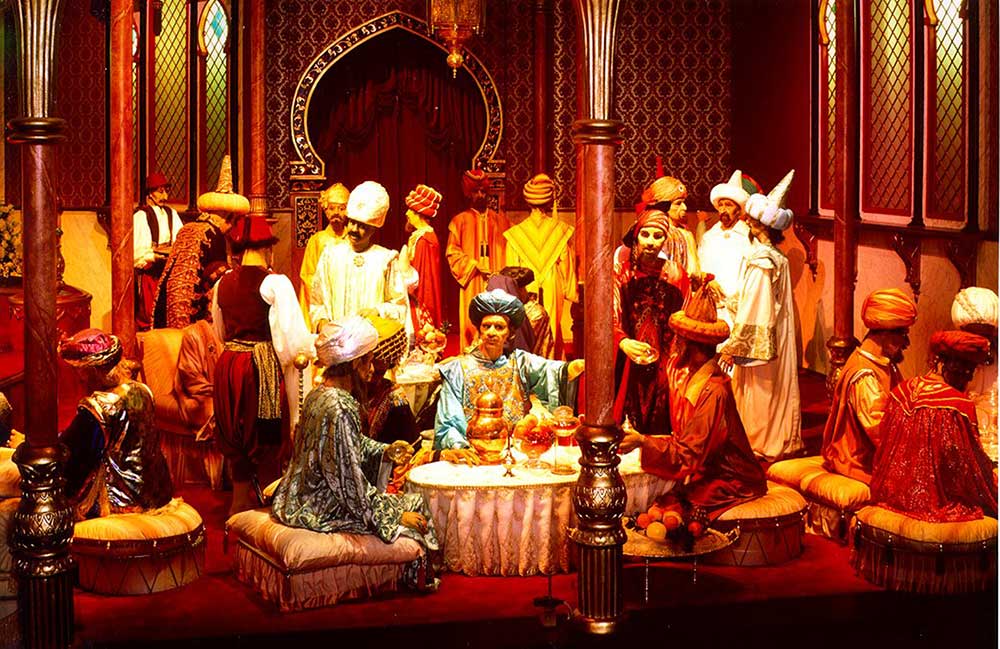 By 2020 our vision is to welcome five million annual guests. Last season we received 4,764,000 visitors, making Efteling the number four theme park in Europe. To get to five million, we want to further increase our quality and also our capacity, so that the waiting times are not too long. That is important for us. We also want to expand our accommodation.

There is still a lot of opportunity for us to make the park bigger. We have reached an agreement with the local government to grow the park from 72 to 80 hectares. The next major new ride after Symbolica will be in or before 2020. We have enough land, but I am not sure about a second gate. First let’s get to five million, then who knows? Of course we always look at the competition to see what they do.

We have no interest to expand outside the Netherlands; all our focus is here in Kaatsheuvel.

Money stays within the park

We have different ownership to most theme parks. We are 100% owned by a foundation. That means all the euros we earn we can put back into the park and money does not go out of the firm to shareholders. Of course revenue is important, but for us sustainability is what really matters. Our main goal is to be here for the next generation.

Built at a cost of €35 million, Symbolica is the largest and most expensive attraction in Efteling’s 65 year history. It invites guests to enjoy an audience with the king and the park’s jester character Pardoes inside the Palace of Fantasy. Stepping on board six-seater vehicles by ETF Ride Systems, passengers are invited to rediscover their imagination on an adventure through the magical, hidden rooms of the palace. Three different routes through the ride are available, each lasting seven minutes.

In total, ETF supplied 34 trackless Multi Mover ride vehicles. This is the second time the company has worked with the park in Kaatsheuvel near Tilburg, about 75km from its base in Nederweert.

“A number of years ago we supplied our Mystic Mover vehicles to Efteling to move some set pieces around in their Emperor’s New Clothes performance in the Fairytale Forest,” notes ETF director Ruud Koppens. “We are proud to have been a partner with Efteling for a second time, especially as it is more or less in our backyard and well-known as a park with a positive worldwide reputation.”

“We were looking for a supplier that could work with us and have the same connection,” says Efteling COO Coen Bertens. “ETF is specialised in dark rides and has a very good track record.”

Koppens adds that with Symbolica the park has “used more or less all the technical routing options available with the Mystic Mover. This in combination with the three different routings make it unique. All three vehicles leave the station at the same time. We also created a separate disabled guest station with an automatic vehicle change, meaning the ride will never have to stop or slow down when a disabled guest is loaded/unloaded.”

Also new for 2017 at Efteling is the new Loonsche Land holiday village. It offers extraordinary accommodation above, on and below ground. The village comprises 1,000 new beds spread over an area of nearly eight hectares. Families can take their pick from 65 holiday homes, 20 smaller lodges/treehouses and 75 hotel rooms. All of these are finished with natural materials. In the morning, guests can walk straight from Loonsche Land and into Efteling park. According to Bertens, bookings have been strong since the village opened at the end of May.