Chloe Hausfeld, Director of Marketing and Business Development at Jack Rouse Associates (JRA) has been named 2017 Young Professional of the Year by the The International Association of Amusement Parks and Attractions (IAAPA). 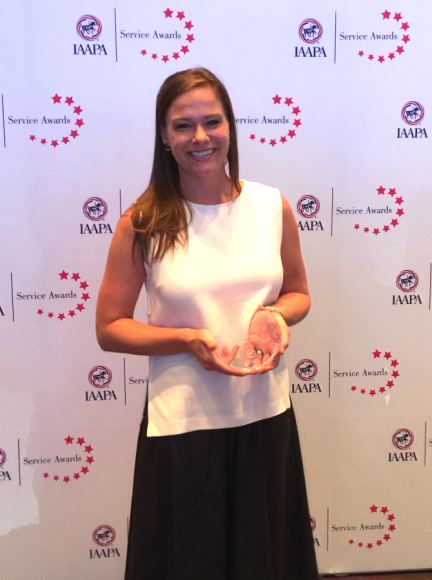 Chloe Hausfeld was presented with the award at the annual IAAPA Attractions Expo’s GM and Owners Breakfast by IAAPA Young Professionals Sub-Committee Chair, Will B. Morey, ICAE.

The award recognises members who show a dedication to the attractions industry through strong leadership, teamwork, and integrity, while continually developing their knowledge and experience.

Hausfeld was chosen from a strong list of candidates for her professionalism, leadership ability and passion for the industry.

“In her short time in the industry, Chloe has made a name for herself by working tirelessly and dedicating herself to advancing the missions of JRA and IAAPA,” noted Morey. “She speaks candidly and is a motivating force to those around her.”

According to JRA, Hausfeld’s leadership efforts and relationship management abilities have greatly contributed to the company’s penetration into the Asia-Pacific market. The company describes her as a chief strategist in the studio’s marketing and business development department.

“I have had the very distinct pleasure of watching her grow up (literally) in our industry,” reports Dan Schultz, JRA’s Chief Operating Officer. “Her passion and dedication serve as a prime example of the new wave of talented professionals that will lead the charge as our industry continues to grow and prosper.”

During the past two years, Hausfeld has represented both IAAPA and the State of Ohio in IAAPA’s Advocacy Day activities, lobbying Ohio senators and representatives on the issues faced by the entertainment industry.

Most recently, she served on IAAPA’s Give Kids the World (GKTW) Committee to help organise a number of charity events hosted by IAAPA during Expo week.

“I’m unbelievably honored to receive the award, and I’m grateful to those who contributed to the nomination,” comments Hausfeld. “To say that I am lucky to able to do what I do is an understatement, and I look forward to many more years in the ‘Industry of Fun’!”