In a fresh licensing deal with London Resort Company Holdings, Paramount is to bring a taste of Hollywood to The London Resort, the ambitious theme park project outside London that originally carried its name. Guiding the development of the resort, now set to open in 2024, is a new CEO in the shape of PY Gerbeau.

The new agreement with Paramount Pictures Corporation means that the theme park at the heart of the project will feature rides and attractions based on major movies as well as home-grown UK intellectual property. This follows existing licensing deals with ITV Studios and BBC Studios.

Although no decisions have been made regarding which Paramount IPs will be used, it potentially gives the theme park access to such world-famous films as The Italian Job, The Godfather, the Mission: Impossible franchise and post-apocalyptic hit A Quiet Place. A range of “awe-inspiring experiences” are promised.

After serving as vice-president of operations at Disneyland Paris for a period in the 1990s, he took up a high profile role as CEO of London’s Millennium Dome, where he is credited with steadying the ship of the attraction, now known as The O2. Gerbeau went on to co-found and for 10 years serve as CEO of X-Leisure, operator of three (now two) Xscape indoor ski slope facilities in the UK.

“I am delighted to join The London Resort and to play my part in helping to create a world-class destination to rival all others,” says Gerbeau. “Central to that strategy is to partner with the best brands from across TV, film, music and entertainment.  Having Paramount on board is a major step towards realising that ambition. Now the best of Hollywood will be joining the best of British from BBC Studios and ITV Studios.” 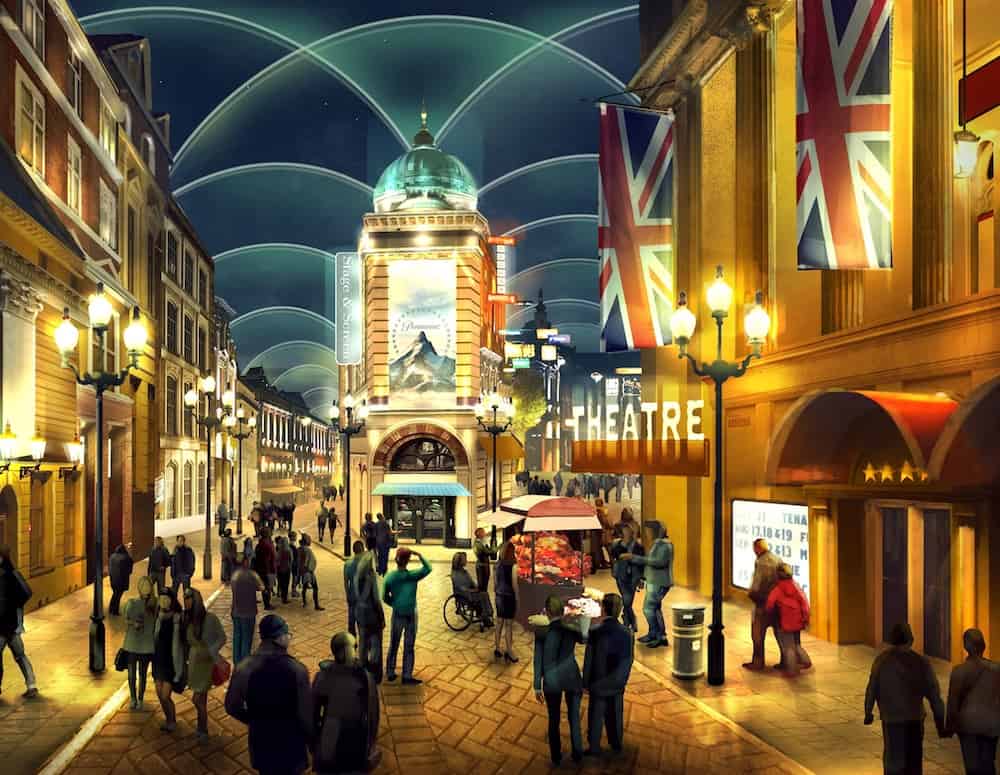 Formerly known as London Paramount Entertainment Resort, the project was renamed The London Resort after Paramount terminated its original licensing deal in 2017. The new agreement with London Resort Company Holdings means Paramount’s movie IPs will be featured inside the theme park, rather the resort itself being Paramount branded.

An earlier deal with Aardman Animations, owner of brands such as Wallace and Gromit and Shaun the Sheep, will no longer be pursued. Nevertheless, the agreements with both BBC and ITV provides access to a catalogue of well-loved content from the UK’s two largest TV broadcasters.

Located at the Swanscombe Peninsula in Kent, 17 minutes from London by high speed rail, The London Resort will eventually span a 535 acres (215 hectares). Around 200 acres of the site will dedicated to to rides and experiences. Also featured will be what is described as Europe’s largest entertainment district. This will comprise thousands of hotel rooms, shops, restaurants, theatres and events space.

Over £1 billion ($1.3bn/€1.1bn) will be invested in the first phase of the project. Once open, the resort will create thousands of jobs and be a major regional contributor to the UK economy. Construction is targeted to begin in 2021. The current projected opening date of 2024 follows several delays and is subject to planning approval.

London Resort Company Holdings was acquired by the Kuwaiti European Holding Company Group (KEH) in 2013. Last year KEH’s CEO, Dr Abdulla Al-Humaidi, vowed to take “personal control and responsibility” of the resort after expressing his regret that more progress has not been made.